Let’s start this week’s column off with a comparison of 2016 stats for two pitchers.

Any guesses as to who Player B is?Ã‚Â Here’s a hint: he’s a former Red.

That’s right, it’s none other than Johnny Cueto.

With Cueto out of the picture in Cincinnati for over a year, Anthony DeSclafani has quietly become the top pitcher in the Reds rotation, even if he doesn’t get much fanfare for it. Even among Reds hurlers, he’s probably not the first guy most peopleÃ‚Â think of.

Just in the current starting rotation alone, Dan Straily, Homer Bailey, and Brandon Finnegan have grabbed more headlines this season, each for varyingÃ‚Â reasons. But maybe DeSclafani should be getting more attention, not just among Reds fans but around the league, as he’s easily been the best starter on the team and amongÃ‚Â the best in the league since making his season debut on June 10.

Coming into the season, the right-hander was tabbed as a potential breakout candidateÃ‚Â after an impressive rookie season in the Cincinnati rotation. After missing the first two months of the season with an oblique injury, he fell off the radar of many people outside of Reds country, but he has quietly had the season many expected of him.

In only 101 1/3 innings pitched, over 50 fewer than Straily or Finnegan, the 26-year-old has been worth a team-leading 1.9 fWAR and has posted a 2.93 ERA to go along with a 3.72 FIP, 3.93 xFIP, and 3.95 SIERA. Among Cincinnati starters, DeSclafani trails only Homer Bailey and Raisel Iglesias — who have made only six and five starts, respectively — in the latter three categories. Since the all-star break, he’s among the top 25 in baseball in fWAR, xFIP, and SIERA among qualified pitchers.

DeSclafani’s promising trend from the final two months of 2015 has carried over into 2016, as his strikeouts continue to rise while his walksÃ‚Â keep falling,Ã‚Â both reaching Cueto-like rates.

He has struck out 21.4 percent of the hitters he’s faced in 2016,Ã‚Â which puts him above league average (21.0%) and is a considerable improvement from his rookie season (19.2%). Since the start of July, after he’d gotten a few starts under his belt and shaken off the rust, his strikeout rate has been 23.3 percent.

The pitch that has really helped him get over the top is his knuckle-curveball, which he began developing toward the end of last season. It has not only become his preferred off-speed pitch over the changeup — it has also overtaken theÃ‚Â sliderÃ‚Â as his best swing-and-miss offering. DeSclafani has been selective with the pitch, using it only 9.7 percent of the time, but when he has thrown it, he’s gotten 17.7 percent whiff rate.

Here’s a look at his progression with the pitch since last season by usage and whiff rate: 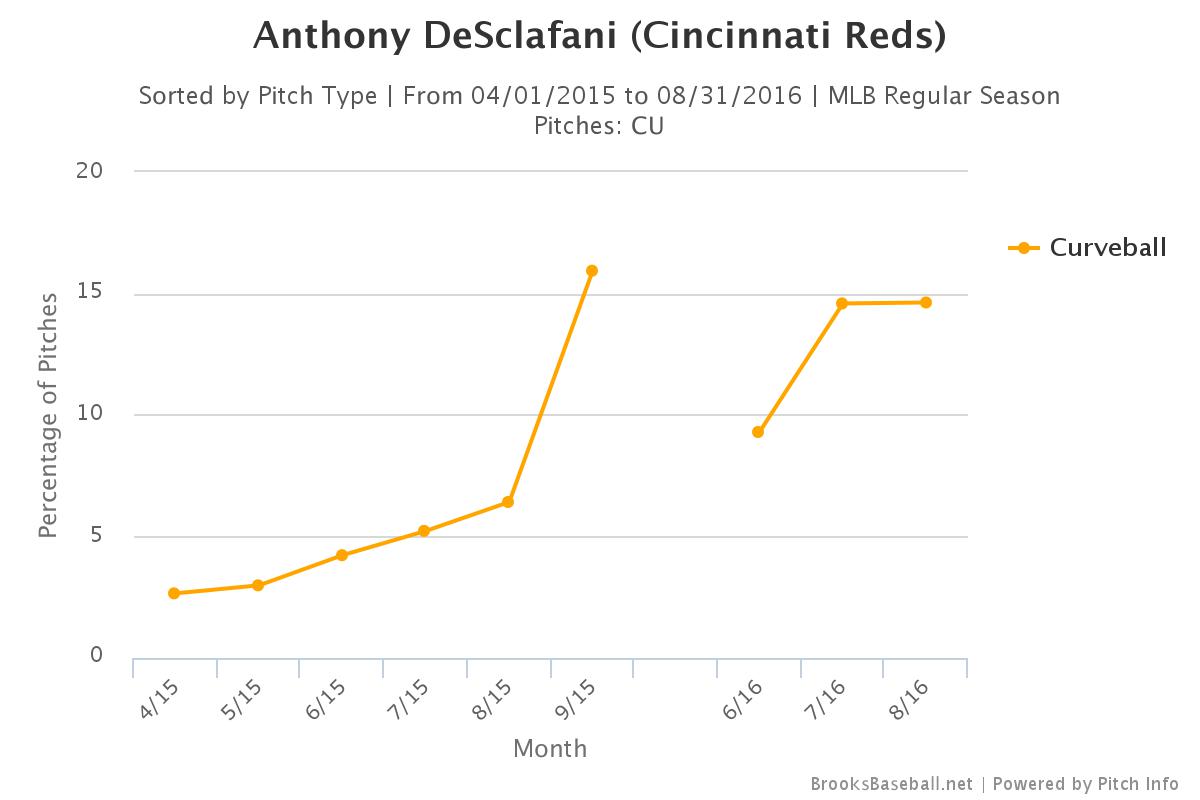 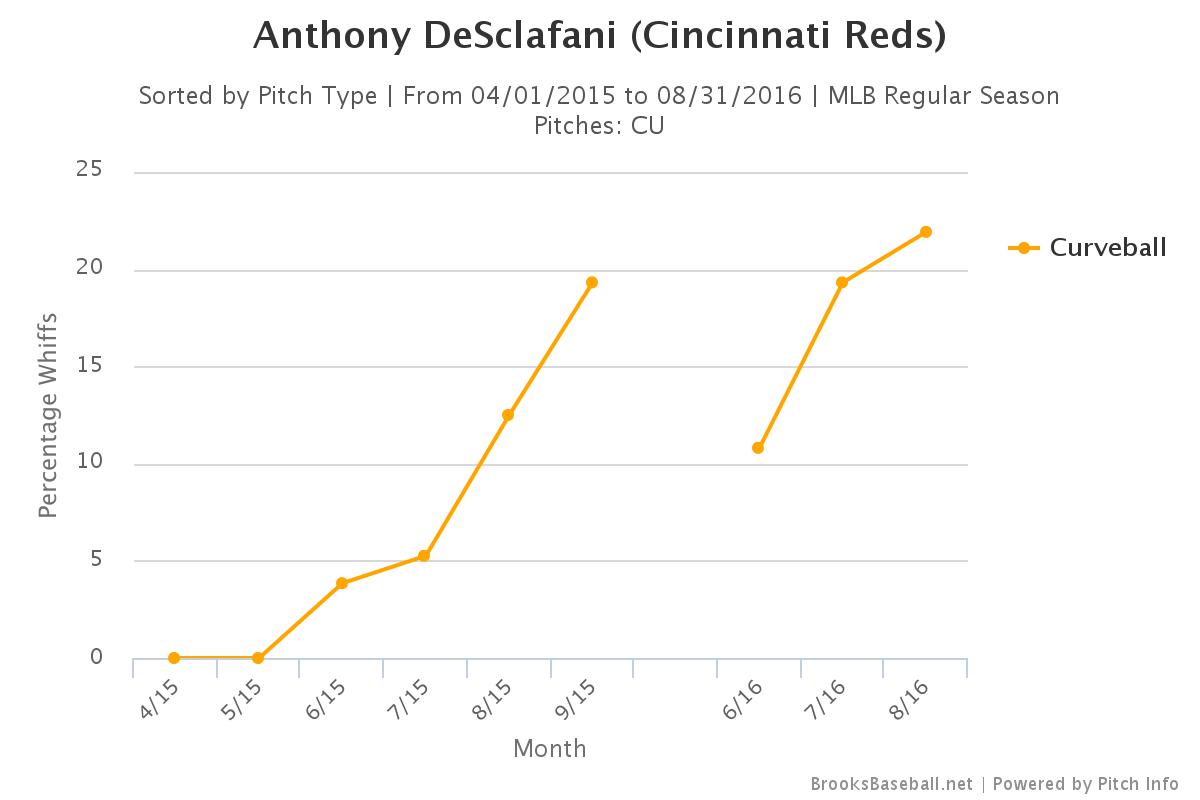 While his stats are above the league average across the board, what puts him among the best in all of baseball is his control. DeSclafani has walked only 5.3 percent of the hitters he’s faced this season, which puts him in elite company. Among the 125 pitchers who have thrown 100 or more innings this season, thatÃ‚Â ranks 12th, better than the likes of Noah Syndergaard, Chris Sale, David Price, Jacob deGrom, Max Scherzer, and Madison Bumgarner.

“Disco” was supposed to get the Opening Day start for the Reds this season, not because he was the typical ace who gets such an honor, but because his 36Ã‚Â major-league starts made him the most experienced pitcherÃ‚Â on the team (aside from Bailey, who was recovering from Tommy John surgery). While DeSclafani ultimately didn’t make that start after being sidelined with an oblique strain, he figures to be among the favorites to toe the rubber when the Reds take the field at Great American Ball Park for the first timeÃ‚Â in 2017.

If that happens, it won’t be by default, however. It will be because he’s quietly started to develop into what could be a legitimate top-of-the-rotation pitcher.