The RedsÃ‚Â losing streak against the Mets reached thirteen games onÃ‚Â Tuesday evening. The Reds have not beaten the Mets since 2014. 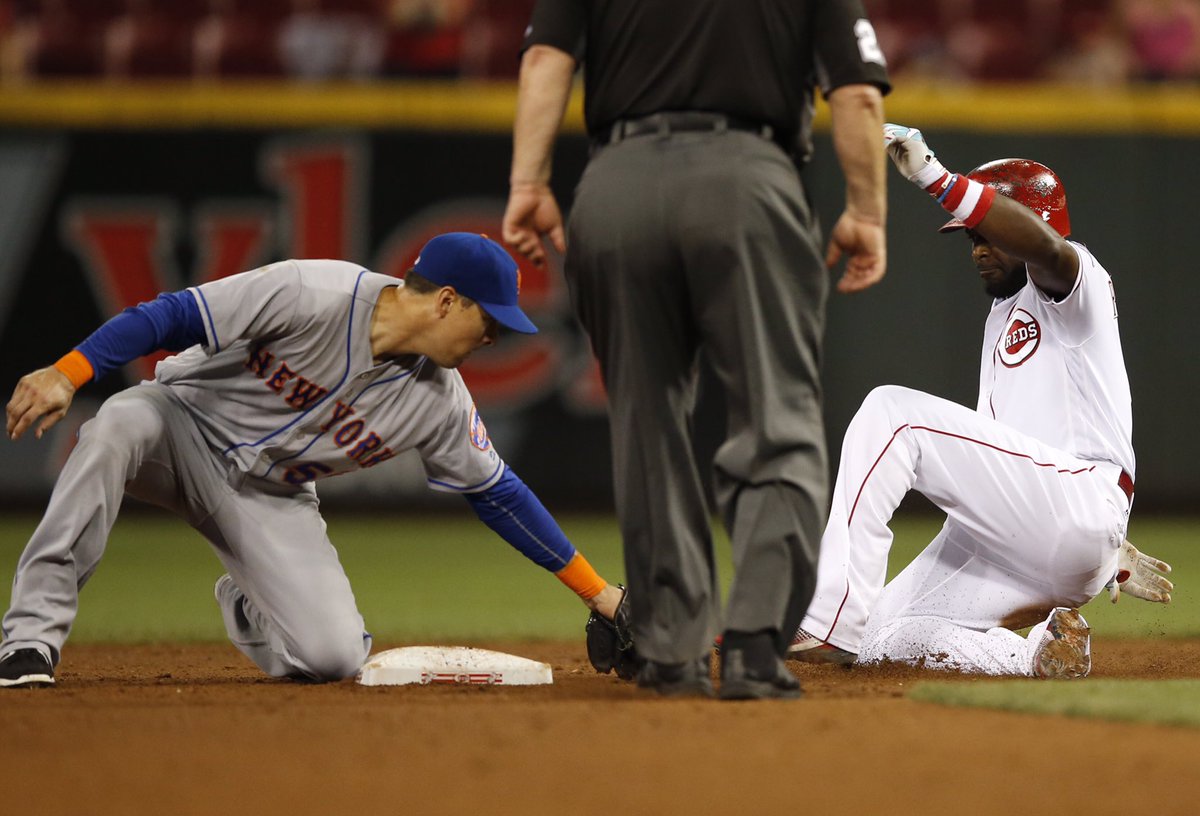 The Reds fell behind quickly as Brandon Finnegan allowed a pair of solo home runs in the second and third innings. Adam Duvall responded by hitting his 30th home run of the season in the bottom of the third. The Reds took a 3-2 lead in the fifth inning on a sacrifice fly by Joey Votto.

Yoenis Cespedes spoiled a solid start by Brandon Finnegan earlierÃ‚Â this seasonÃ‚Â by hitting a big three-run home run in a game in April. Tonight, Cespedes hit a two-run home run in the seventh inning, giving the Mets a 4-3 lead. Blake Wood allowed a home run later in the ninth, and the Reds would end up falling 5-3. The loss wasÃ‚Â number 80 for the Reds in 2016. 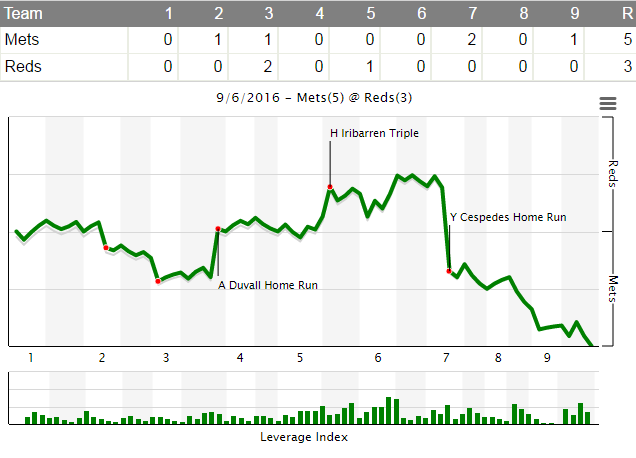 According to FangraphsÃ‚Â WPA statisticÃ‚Â (winning percentage added), the most important play of the game was Michael Lorenzen allowing a 2-run home run to Yoenis Cespedes with 1 out in the 7th inning, giving the Mets a 4-3 lead.Ã‚Â That play decreased the Reds chances of winning by 36.5% (from 69.2% to 32.7%). 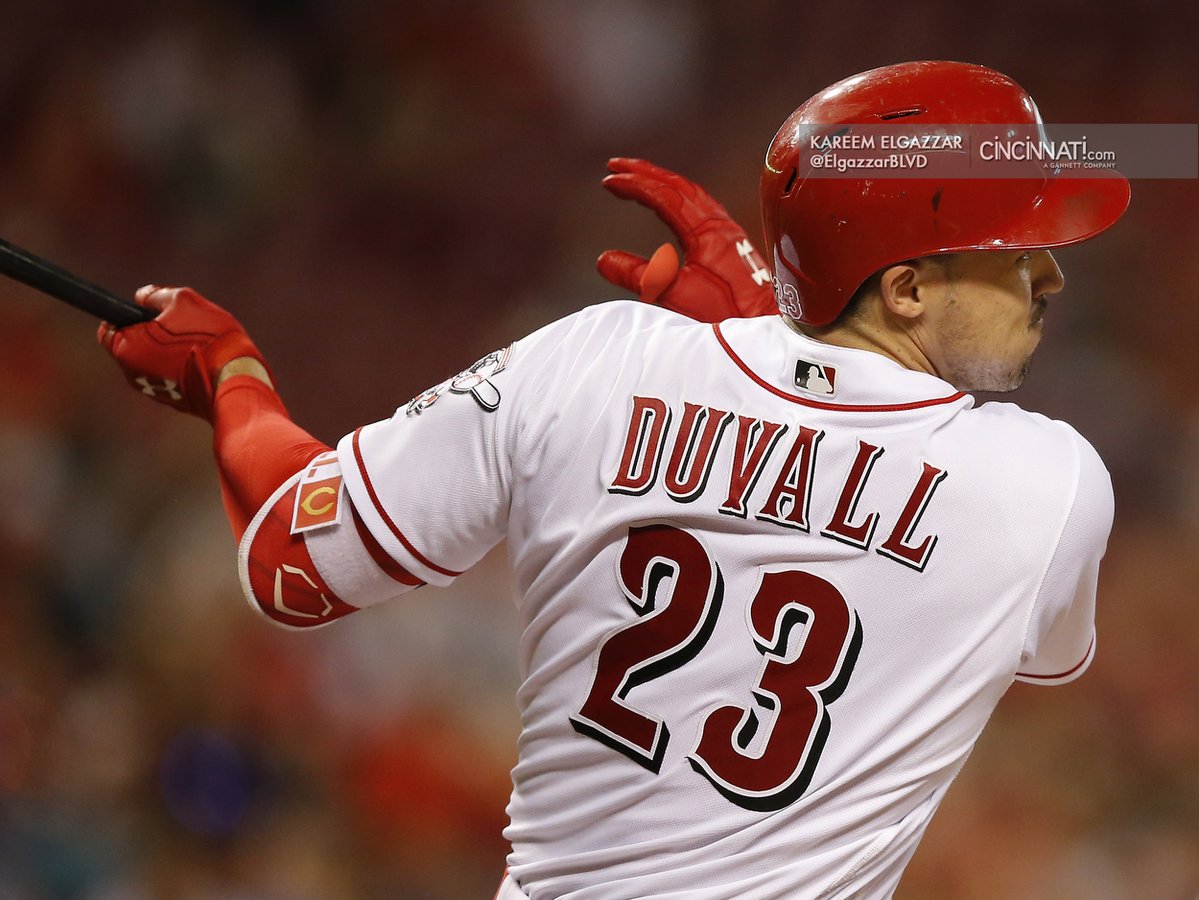 DuvallÃ‚Â hit his 30th home run of the season. It is pretty incredible that the “throw-in” piece in a trade for nine starts of Mike Leake has hit 30 bombs at the MLB level. Or is it?

Hernan IribarrenÃ‚Â had a pinch-hit triple for a second consecutive day! Our own Jason Linden wrote a cool story about IribarrenÃ‚Â from his time around the Bats this season.

Hernan Iribarren is the first player to have PH 3B in consecutive games since Scott Cousins of the Marlins on 9/24-9/25/2010.

Joey VottoÃ‚Â had a hit and a sacrifice fly.

Raisel IglesiasÃ‚Â pitched a perfect 8th inning with a strikeout.

I guess this goes in the positives……What happened toÃ‚Â Jay Bruce‘s arm? He made a really poor throw on a Votto sacrifice fly in the 5th inning, resulting in the Reds taking a 3-2 lead.

Rough night forÃ‚Â Michael Lorenzen.Ã‚Â He has been great for the Reds in the pen this year, but he got smokedÃ‚Â by the mighty Yoenis Cespedes tonight.

Jose PerazaÃ‚Â was 0 for 4 with 2 strikeouts.

The second pitchÃ‚Â Blake WoodÃ‚Â threw ended up in the seats.

I had to make a separate category forÃ‚Â Brandon Finnegan.Ã‚Â Looking at the surface, 2 ER in 5.0 innings is pretty solid. Looking at the peripherals, not so much: 2 HR, 4 BB, 6 K, 8.35 FIP. Both of the home runs were solo shots, so that is the best way to give up home runs. He is however very lucky those home runs didn’t happen when one of his four walks were on base. Still, it is nice to see Finnegan finishing the season with success. He has allowed 3 ER or less in 10 of his last 11 starts.

Kudos to the Reds for not wasting service time on Jesse Winker, Amir Garrett, and Dilson Herrera. ICYMI, Dick Williams basically confirmed that those guys will not get called up. There is no reason to call up Winker andÃ‚Â Herrera when the Reds already want to get looks at Scott Schebler and Jose Peraza. There is also no reason to rush Garrett like Reed either.