Last year, in explaining why the Reds didn’t fire manager Bryan Price at the end of the season, Walt Jocketty paid Price a compliment for the way the Reds continued to play hardÃ‚Â during the season’s final weeks.

Price may or may not be asked back in 2017. The self-annihilating use of Alfredo Simon in a close game on Monday may suggest Price isn’t interested. If the Reds do make him an offer, it won’t be on merit. It’ll be because Bryan Price will be the guy willing to swallow his pride and take a 1-year deal.

If the two sides somehow find their way to agreement, we’ll again hear empty platitudes about the team playing well down the stretch. Mouthed whether or not it’s really the case. After all, the 2015 Reds were 18-43 after August 1.

They won’t be talking about today.Ã‚Â “It’s almost like they’re sleepwalking.” Jeff Brantley.

The afternoon’s competition was almost over after one pitch as Jose Reyes delivered an Anthony DeSclafani 92-mph fastball to theÃ‚Â right fieldÃ‚Â bleachers. If you’ve been paying attention, the first-pitch homer felt familiar. DeSclafani has given up a leadoff, 1st-inning homer three times in his last six starts. The previous two were smacked by veterans Chase Utley and Matt Carpenter. Otherwise,Ã‚Â DeSclafani pitched six innings, striking out 7 and walking 1. He was fine.

Meanwhile Reds batters were dealing with Noah Syndergaard’s 97-99 mph fastballs for 5 innings. The good news was they managed ten base runners. The less good news was the performance of running between said bases. Take the 2nd inning. Please. Brandon Phillips led off with a single. He was thrown out stealing.* Scott Schebler followed with a walk. He was thrown out doing something resembling a cross between a stolen base attempt and an elementary school game of pickle. The next batter, Tyler Holt, walked, of course.

*Phillips, has 9 successful stolen bases this season and been caught 7 times. That falls juuuuuust a bit short of the 75% success rate needed for attempting a stolen base to make strategic sense. Of the 153 qualified position players, Billy Hamilton ranks first in FanGraphs’ composite base running stat. Phillips ranks #133, worst among the Reds.

The Reds weren’t finished sacrificing outs on the bases against Syndergaard. In the third inning, with Jose Peraza on third base, Eugenio Suarez was either picked off or the Reds were trying a Little League play. In either case, the Mets, not being a Little League team, nailed Peraza at the plate.Ã‚Â “The Reds just can’t get out of their own way,” said Jeff Brantley.

The garbage-time role bullpen segment – Wandy Peralta in this case – gave up two runs that proved to be pretty important when the Reds scraped together three runs in the bottom of the 8th. Tony Cingrani gave up a run in the top of the 9th.

Jose Peraza continued to fire line drives all around the park. He was 4-for-5 with three singles and double. Scott Schebler had two hits and two walks.

The Reds were swept in this series. They were out-homered 9-1. You build your offense around stolen bases. I’ll build mine around power and getting on base.

Joey Votto, who was 1-for-4 with a walk, took out his frustration in the 7th on a helpless piece of wood. Reds fans can sympathize with the bat today. 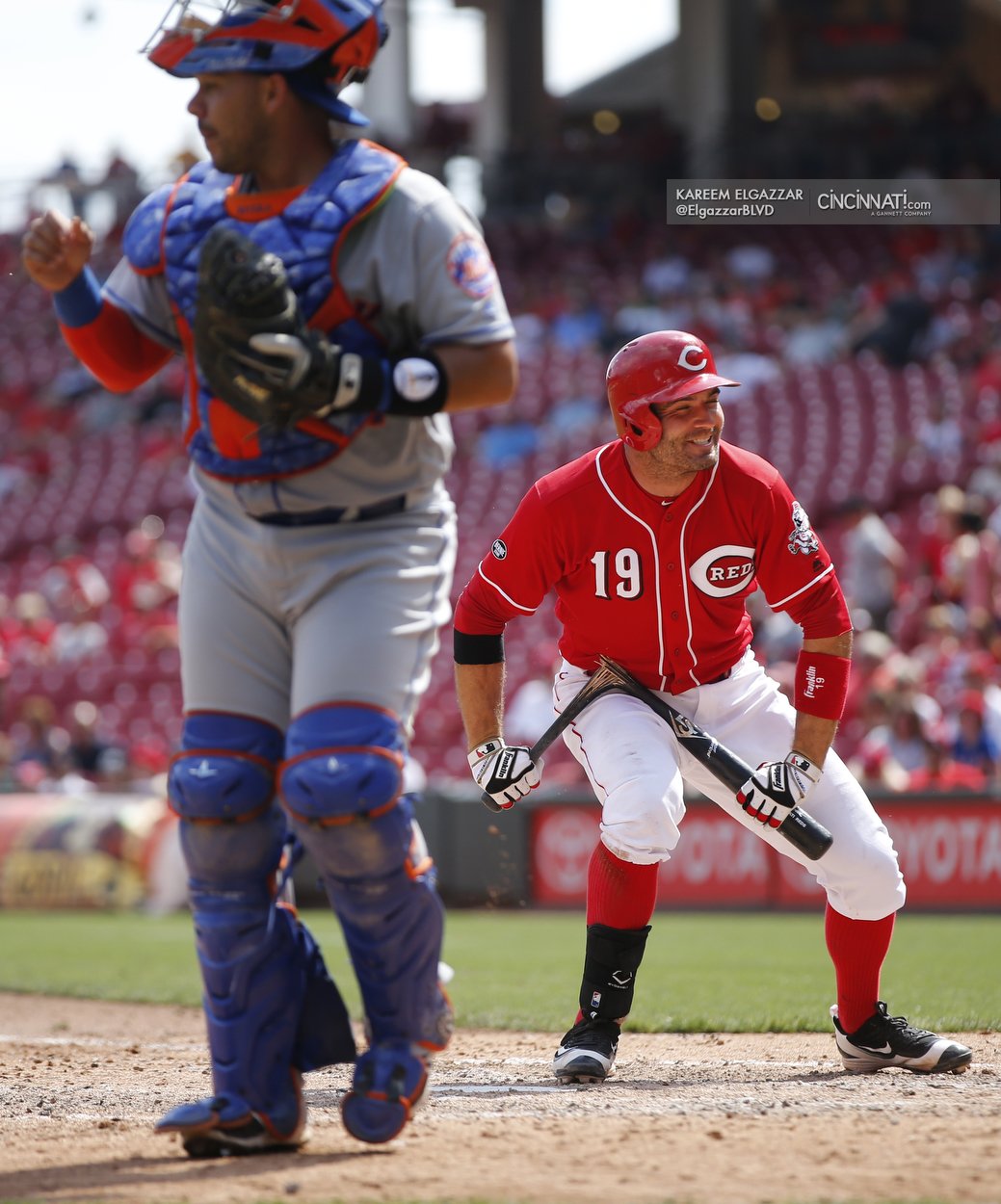 The internets achieved rare consensus about the day’s events in short order:

Darling is DESTROYING the Reds right now. Calls them "garbage" for their lack of effort today.

This game has been a hot mess for the #reds, to put it mildly. This inning should be over but 2-out E6 and wild pitch added run in 3rd. 2-0

This is the sloppiest, worst game the Reds have played this year. And thatÃ¢â‚¬â„¢s saying something. Be glad itÃ¢â‚¬â„¢s not on TV

Billy Hamilton update: Hamilton won’t make the road trip to Pittsburgh. He’ll stay in Cincinnati for treatment on his strained left oblique. Hamilton’s 2015 season was cut short by surgery for a sprained shoulder capsule. In 2014, he sat out the last few games with a concussion.

Daniel Wright update: The Reds released pitcher Daniel Wright last week to make room on the 40-man roster. Wright was picked up by the LA Angels. Manager Mike Scioscia announced today that Wright would start for the Angels on Saturday. One reason: “He’s got a really good spin rate.”

Also overheard: Radio announcer named Franchester made fun of player with a rare European given name.