In the hours up until the first pitch of ThursdayÃ¢â‚¬â„¢s afternoon contest, it wasnÃ¢â‚¬â„¢t looking like it would be a comfortable debut for Robert Stephenson. Temperatures in the mid-40s felt colder with the blustery wind gusts and drizzling rain. A brave group of 10,784 came to the ballpark to greet Stephenson to the majors.

Yet, the RedsÃ¢â‚¬â„¢ top pitching prospect turned in a solid, if not shining, debut. It wasnÃ¢â‚¬â„¢t exactly a Matt Harvey-esque first outing, but the Reds gave Stephenson a simple game plan and he followed it well enough to keep his team in the game and get a win in his first start. 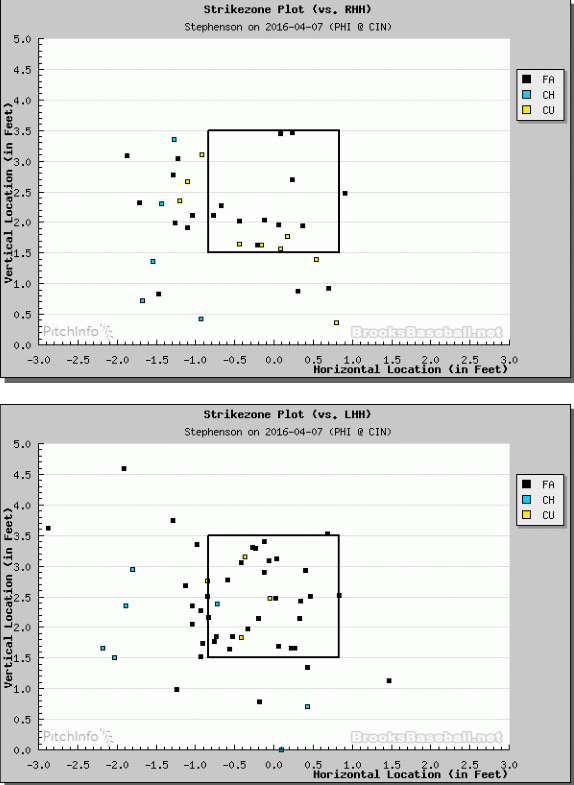 That planÃ¢â‚¬â€fastballs and changeups, stay low and on the cornersÃ¢â‚¬â€was executed rather well by the 23 year-old. His four-seamer sported some nasty tailing action, darting away from the many lefty hitters in the Philadelphia lineup, and hovered around 92-94 MPH for the afternoon. His changeupÃ¢â‚¬â€which sports the sort of movement youÃ¢â‚¬â„¢d see from a circle change or screwballÃ¢â‚¬â€served as an adequate compliment early on, as Stephenson avoided using his slow, diving curveball until the last pitch of the second inning.

That combination worked the first time through the batting order, with only Carlos Ruiz making hard contact on a fastball Stephenson mistakenly left up in the zone. But his largely binary pitch selection and some visible nerves eroded his command slightly and made him stumble in the third. He left pitches up to Freddy Galvis, Ryan Howard, and Andres Blanco and had some trouble putting a pesky Odubel Herrera away, though Stephenson eventually struck him out on the ninth pitch of the at-bat.

The same would be true, to some degree, of the last two innings of StephensonÃ¢â‚¬â„¢s outing, in which he walked one batter, hit another, and surrendered two homers without striking out a man. But despite the sound of that summary, he wasnÃ¢â‚¬â„¢t pitching poorlyÃ¢â‚¬â€23 of his last 35 pitches were in or on the fringes of the strike zoneÃ¢â‚¬â€and he wasnÃ¢â‚¬â„¢t grooving many pitches despite his reliance on throwing OlÃ¢â‚¬â„¢ Number One.

Really, StephensonÃ¢â‚¬â„¢s worst pitches were the two above-the-belt fastballs Ryan Howard saw and turned into three runs with a single and home run (the latter coming in the fifth, after the Reds had staked Stephenson a seven-run lead). Outside of that, he did well in adverse, cold conditions. He pounded the arm-side of the plate and used the tailing action on his fastballs and changeups to snag a couple 50-50 strike calls and induce weak contact.

The bottom line is, this debut outing from Robert Stephenson comes with many caveats. On one hand, he faced a largely inept Phillies lineup and only managed a single strikeout in five full innings. On the other hand, three-quarters of PhiladelphiaÃ¢â‚¬â„¢s run production came on two poorly-placed fastballs and the other run was the result of Cedric Hunter golfing a low pitch over the wall. All the while Stephenson only surrendered two walks (each of which came on the only full counts he pitched into all day) and grinded through five innings with chilly temperatures limiting his repertoire to some degree.

It wasnÃ¢â‚¬â„¢t a glamorous debut. If anything it was a quiet and unceremonious arrival for one of the most exciting players in the RedsÃ¢â‚¬â„¢ farm system. But one of the signs of great pitchers is pitching effectively when circumstances arenÃ¢â‚¬â„¢t letting you play at your best. It was an workmanlike, professional outing. And though the stat line doesn’t look like much, none of Stephenson’s immense promise should be diminished by his performance on Thursday afternoon.