It started out so well. The Reds jumped out to a 3-0 lead. Meanwhile, the Marlins were down 6-3 in the 8th inning. Those two scores hold, the Reds are somehow, someway back within 1.5 games of playoff spot.

The Marlins rallied to win 7-6. Sonny Gray cruised through the first three innings, but then the rain fell and it fell hard in the 4th inning. Gray walked two batters as it appeared he could not get a good grip on the baseball. The Cubs ended up scoring 5 runs in the 4th inning with a grand total of one ball leaving the infield.

It got worse. Mike Moustakas and Tyler Thornburg both got hurt. Thornburg got hurt after Brian Goodwin dropped what would have been the third out of the inning to add insult to injury.

Oh and you know baby the Reds had some epic xBA/BABIP luck.

Put this on the Reds 2020 tombstone pic.twitter.com/rP5JYcvin2

According to Fangraphs WPA statistic (winning percentage added), the most important play of the game was Nico Hoerner’s 2-RBI double off Sonny Gray in the 4th inning, cutting the Reds lead to 3-2. That play decreased the Reds probability of winning by 20.9% (from 66.4% to 45.5%).

9 total bases and 5 runs in the first inning over the last 2 nights for the Reds in Wrigley.

Jose Garcia definitely looks like an MLB SS defensively. He made several nice plays in the field. He will surely still have some growing pains and throw away a ball occasionally, but he has all the tools to be very good in the field. Tyler Stephenson did throw out Billy Hamilton in his first career start behind the plate and later drove in a run.

Robert Stephenson retired 4 of the 5 batters he faced, striking out two after he was thrust into duty after the Thornburg injury.

Sonny Gray and Michael Lorenzen couldn’t get it done tonight. The rain definitely had something to do with it, as it was raining very hard and neither pitcher usually has poor control.

Jose Garcia definitely does not look like an MLB SS offensively yet.

Here are the standings if you feel so inclined. Reds are 3.5 back from both of the final two NL wild card spots and 3.5 back of the Cardinals for the NL Central #2 spot. 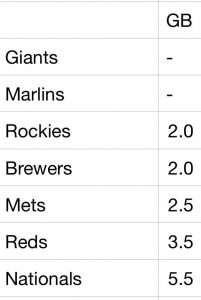