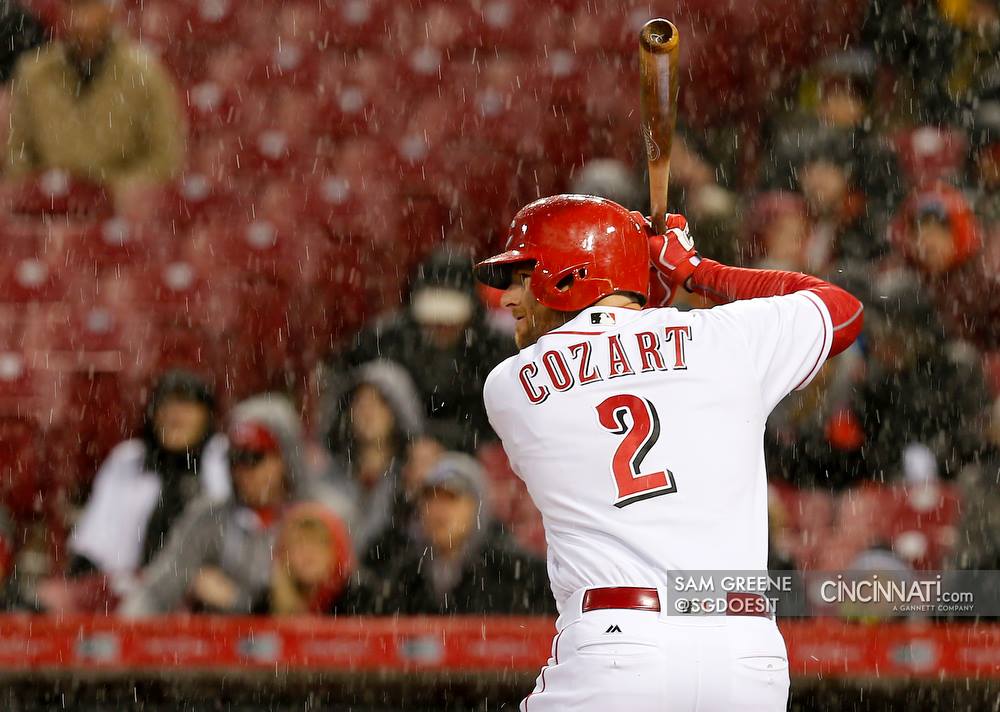 The Good
–Brandon Phillips returned to the lineup, and he responded by hitting a home run and going 2-2 with a walk, two runs scored, and two RBI. He made a dumb decision to try to score and got nailed at the plate in the fifth, but two innings later, he attempted to steal third with Jay Bruce at the plate. When the ball got away from the catcher, he scored to give the Reds a 5-2 lead. Plus, he made another flashy diving stop. Good night for BP overall.

–Billy Hamilton got his first hit of the season, from the left side of the plate no less. And it drove in a run. Then Billy did what Billy does: he stole second base.

–I’ll wait to see what the metrics show, but the eye test on Zack Cozart’s knee is encouraging. He ranged into the hole in the fifth to keep a ball on the infield that could have allowed two runs to score otherwise. Then, a couple of outs later, he made another heads-up defensive play to end the inning after Eugenio Suarez booted a ball.

–Caleb Cotham pitched a scoreless inning, the sixth. He walked a batter, but made a nice play on a comebacker to start an inning-ending double play. Blake Wood pitched a perfect ninth inning.

The Bad
–The Reds led 5-2 as the Pirates batted in the top of the eighth. Ross Ohlendorf and his 1920s-era windup quickly retired two hitters before things fell apart. HBP, BB, infield single…and all of a sudden, bases were loaded. Bryan Price then chose to go with JJ Hoover for a four-out save.

Now, I’m not criticizing Price for this decision. We begged him for two years to use Aroldis Chapman in just this manner, and he (pretty much) steadfastly refused, so it was irritating to see him do it with Hoover in the first week of the season. But Hoover is probably his best reliever, so it wasn’t a bad decision.

Using Ohlendorf may have been a bad decision, as Steve noted. Not leaving Cingrani in the game after he only pitched to two batters in the previous inning — Price could rightfully be questioned about that choice. But after Ohlendorf screwed things up, it was a high-leverage moment, and you want your “best” reliever in there.

So Hoover proceeds to surrender a grand slam. Pirates lead 6-5. (And then Hoover didn’t even pitch the ninth; Price brought in Blake Wood. Wood retired Pittsburgh in order.)

–The Reds led 3-1 after 4, but had missed opportunities in both the third and fourth innings. In the third, the Reds loaded the bases with no outs. After a sac fly by BP, Devin Mesoraco grounded into a double play to end the inning.

In the fourth, again the Reds had bases loaded, this time with one out. Cozart grounded into a double play this time around.

–So yeah, Suarez’s defense was bad tonight. Let’s not condemn the guy just yet. The field was wet and conditions were poor. Suarez had never started a big league game at third base before this season…and the last time he started a game at the position was six years ago.

Yes, he was brutal tonight. Keep your fingers crossed that this was just an anomaly.

Not-So-Random Thoughts
–Well, that was a fun game for most of the evening.

–Everyone knew the bullpen was going to be a problem this season. Don’t act surprised.

–Alfredo Simon was so-so, going five innings while allowing two runs (one earned) on five hits and two walks. He struck out seven and threw 92 pitches. That’s pretty much going to be a standard Simon start, methinks.

—According to Joel Luckhaupt, Hoover tied Frank Smith tonight for the most grand slams allowed in Reds history with 5. For what it’s worth, that was Hoover’s first save opportunity since taking over the closer role from Chapman.

…but wait! Looks like Pittsburgh Penguins fans started doing it back in 2010!

Yes, I wasted a portion of my evening researching this. You’re welcome.