The trade overall is interesting. Robert Stephenson has been significantly better than Jeff Hoffman has in their careers. While Stephenson had some struggles early in his career, he had turned in two solid seasons in 2017 and 2019 – with 2019 actually being a pretty good one. Hoffman, though, has never been too successful in the Major Leagues. He’s thrown 230.2 innings since 2016 began and has a 6.40 ERA. His ERA’s over the past four years have been 5.89, 9.35, 6.56, and 9.28.

When it comes to the prospects that were swapped – Jameson Hannah rated out as the #23 prospect in the Reds organization at the mid-season point in 2020. He’s a plus runner and can play center field. On the flip side he’s a huge ground ball guy who has struggled to tap into any power in his career so far. Case Williams has not yet played an inning in his professional career. He was the Rockies 4th round draft pick this past year out of Douglas County High School in Castle Rock, Colorado. He didn’t get to pitch in his senior season, and is seen as a bit of a long-term project than a quick mover according to pre-draft scouting reports. Williams also did not rank within the Rockies mid-season Top 30 prospects according to Baseball America.

Moving back to the big leaguers – both guys struggled in 2020 out of the bullpen. Stephenson’s health wasn’t there, and when he did get on the mound, the results were poor as he allowed 11 earned runs – including EIGHT home runs – in 10.0 innings. There was some thought out there that the Reds would consider non-tendering him, though I think that perhaps that was not nearly as likely as some. He was pretty good in 2019 and no one doubts the stuff he has at all.

When it comes to Jeff Hoffman, his percentile card at Baseball Savant tells the story: 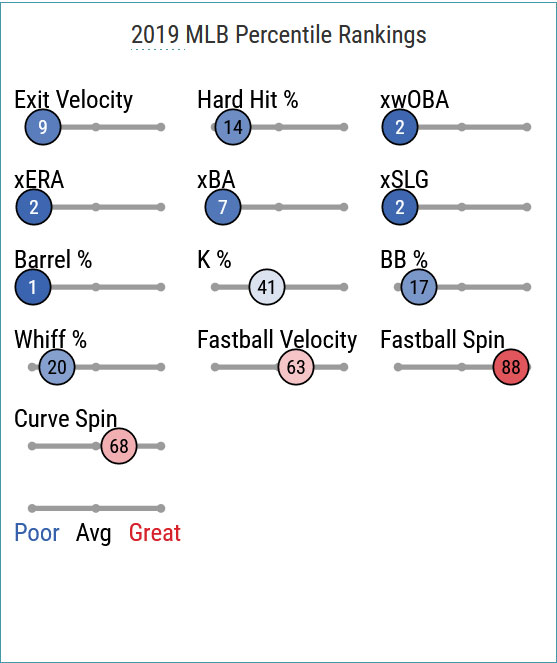 What it tells us is that from a performance standpoint, he’s been bad. Real bad. But he also throws hard and he spins both his fastball and curveball well. Basically, the Reds are hoping they can “fix him” because the underlying things he does with his pitches are things that work if you can execute.

It seems that the Reds flipped Robert Stephenson and Jameson Hannah for two lottery tickets. Jeff Hoffman has potential, but he’s going to be a 28-year-old in January who has a career 6.40 ERA in the Major Leagues. Case Williams represents a different kind of lottery ticket – more than a scratch off that likely has a bigger payout if you win, but the odds of winning are a lot lower given that he’s an 18-year-old who has never thrown a professional inning in his life.