When the queen came to the abbey for live rehearsals it became obvious, to the horror of the cameramen, that the archbishop’s robes concealed her face from their lenses as he lowered the crown, totally obscuring the main shot of the day. The archbishop tried again, raising his arms higher and subtly shifting the angle of his gesture so the camera line was not obscured.

When Elizabeth II was crowned in 1953, there was a great deal of frowning when the idea of televising the ceremony was broached. This was considered a massive breach of privacy, unfit for the dignity of a queen. She didn’t want it, her advisors didn’t want it, and a vast swath of the UK thought they didn’t want it, but they all watched anyway.

The young monarch strictly forbade closeups and her husband, Prince Phillip, oversaw the operation so as to protect her respectability. Certain sensitive moments of the ceremony, such as the Queen’s anointment as head of Church of England, weren’t shot at all. But before the day arrived and the cameras rolled at all, as you see here, the ceremony had turned itself over to the cameras. In the very act of receiving the crown of an empire that stretches back a thousand years, Elizabeth deferred to the real ruler– the unseeing eye.

This was a prescient moment for Elizabeth II, whose heir and his bride would wage war in print and on camera, a battle in which the press played a part in the untimely death of the mother of the future king. She couldn’t have known this as the archbishop canted the angle of the crowning so as to please not her, but the cameras filming the moment. But the rock had been tossed in the pond, and there was no retrieving it or stopping the ripples. 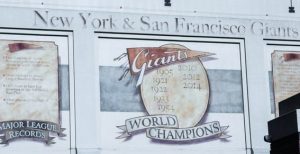 Meanwhile, across another, less metaphorical pond, baseball was pivoting to the same new overlord. In 1951, the “Shot Heard Round the World” was mostly heard, not seen, and it was perhaps the last major sports moment the nation heard from radio speakers rather than flickered into living rooms. “The Giants win the pennant!” call from Russ Hodges’ microphone survives only because a New York fan asked his mother to tape the game, which he couldn’t listen to because he was working. A day shift and a mom who happened to own a reel-to-reel recorder: That’s the only reason the audio survives.

Now, of course, we all carry high-flown editing suites in our jacket pockets. The slow result of this has been catastrophic for baseball, a game built for a summer afternoon in the stands, not a two-hour broadcast with convenient television time-outs. Baseball broadcasts tie with a neater bow than football and are more disposed to emotion-reading zooms than basketball, but its one-batter-at-a-time pace means that if anyone is watching the recording of a game, there’s a lot of ffing involved (yes, that is a word, because I said so, and it is pronounced “fiff-ing”, to rhyme with “miffing,” also because I said so.)

What this means for the future of baseball is up to baseball itself. Are the local market blackouts going to continue? Is the MLB streaming technology going to stop pretending it’s 1994 and we’re all tying up a phone line and logging into our AOL accounts to watch a few pixels float back and forth? Will control devolve back to local fan bases?

It is a sport for radio, and that is not a bad thing, especially in an era when some podcasts are fetching higher numbers than late-night comedy TV shows on legacy networks. We could look at this as an almost-missed opportunity, or we could brace ourselves for baseball’s eventual slide into comparative oblivion as a second-tier sport.

The Queen knew when to yield. And now that the digital revolution has settled in its middle age into nearly every aspect of nearly every life, we’ll see if baseball does too.