Cincinnati Reds first baseman Joey Votto may not be having the season he would like. He’s hitting .207/.337/.354 with four home runs, 11 runs scored and an OPS of .690 thus far in 2020. But that doesn’t mean everything has gone badly for the six-time All-Star and former MVP.

One statistical area in which Votto has improved considerably over the last year or two is strikeouts, or lack thereof in his case. In fact, his K% currently sits at the lowest of his career and the lowest it’s been since his should-have-been MVP season in 2017. That’s good for the top two percent in all of MLB. The only other time Votto’s been close to the top of the league is that same 2017 season when he was in the top four percent of the league.

This season, Votto has struck out just 10 times in 98 plate appearances. That’s downright impressive, no matter who you are. 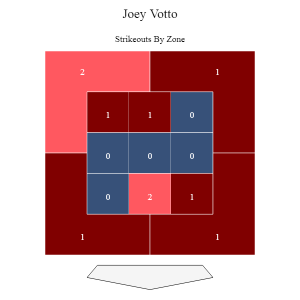 None of Votto’s strikeouts come in the middle of the zone. This isn’t surprising, as he’s too good of a hitter to miss pitches over the heart of the plate. His strikeouts are all either outside of the zone or on the edges of the zone. Of Votto’s ten strikeouts, six are swinging and four are looking. He’s also not going to strikeout more from a lefty or a right-hander, as he has struck out five times off each type of pitcher. He’s been very consistent in his plate discipline.

Striking out less is not a new concept for Votto, but it’s been awhile since he has. In 2017, Votto’s K% ended up at 11.7%, the lowest of his career. His K% sits at 10.2% right now with 30+ games to play.  In 2019, his K% was the highest of his career at 20.2%. Votto has always been the type of player to really dig deep for the ‘why’ in order to correct something he thinks he was exceptionally bad at in the prior year. In 2020, he appears to be set on fixing his strikeout problem. The graph below shows he’s back to pre-2019 strikeout rates, when he was above the MLB average. It even drops almost as low as the end of his 2016 season and his 2017 season. 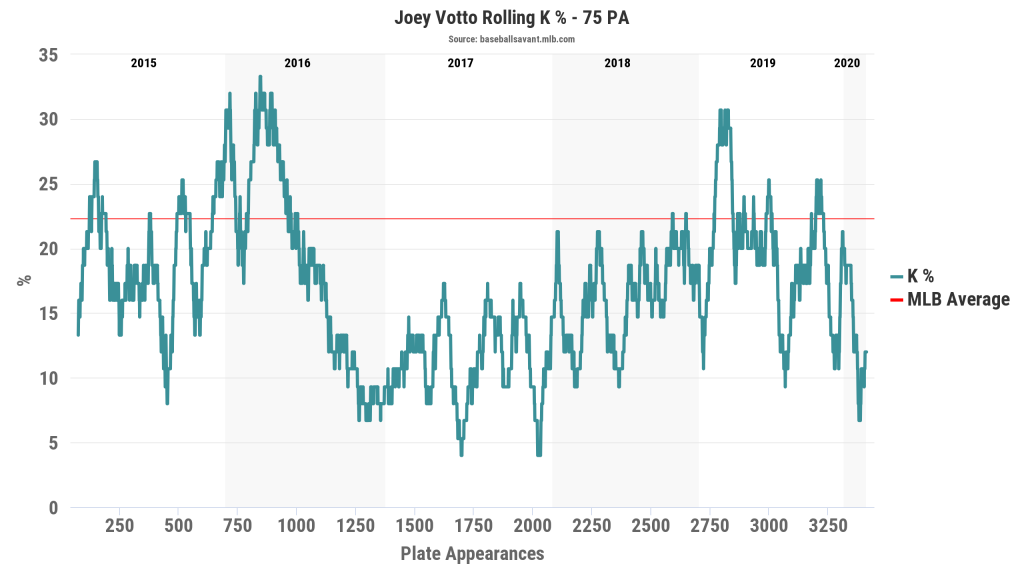 So why is Votto striking out less?

The chart on the left shows Votto’s swing % by zone for 2019, while the chart of the right shows this year’s percentages. Obviously, 2019 is a full season and 2020 is just shy of 100 plate appearances, but it’s still a good visual comparison to show the difference in his swings from last year to this year. One noticeable difference has been the high and inside pitch. Votto has stopped swinging at those pitches, which might have contributed to a higher strikeout rate last season. 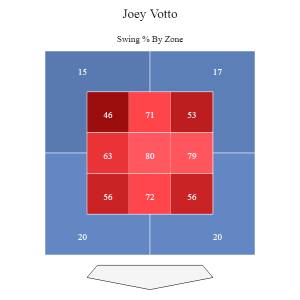 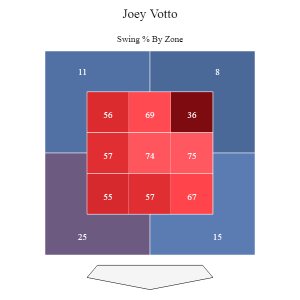 If Votto is striking out less, but still making contact at the same rate, one might wonder why he’s struggling at times. Terrible luck has played into that, as evidenced by a .203 BABIP. That’s not just the worst of his career; it’s the worst of his career by a wide margin. The only other time Votto’s BABIP has been under .300 was in 2014, at .299, just barely under .300.

There are two factors Votto’s BABIP is so low. His pull rate is significantly higher than in previous years. Votto has always been able to go opposite field really well, but this season he’s pulling the ball 54.2% of the time. Never in his 13-year career has it been higher than 40 percent. Combine that with a slightly higher-than-normal ground ball rate and the fact that in 98 plate appearances, teams have employed a shift on him 77 times and it gives you a rough first third of the season (almost half now).

And of course, even Votto acknowledged to Bobby Nightengale and John Fay of the Cincinnati Enquirer that this season has been hard for him to find a rhythm, with the long layoff and four days off after the positive COVID test. He didn’t go so far as to make that an excuse, but maybe this season is affecting him more than we know.

It can turn in a hurry for Votto though. If he continues to keep the strike outs to a minimum and gets a little bit of better luck in the field when putting the ball in play, this is a completely different conversation next week. We can also take solace in the fact that Votto will still get on base. His BB% currently stands at 16.3%, good for the top 7 percent in the league. Some things remain the same, and Votto being in the top ten in walks will always be one of them.