Great expectations are hard to bear, especially when every armchair analyst (myself included) tends to put the burden on the same shoulders. Yasiel Puig, Jose Peraza, Jesse Winker. We named them early and we named them often but these three were, still are really, the keys to the Reds 2019 playoff run. Throw in a Joey Votto return-to-form and a Nick Senzel Rookie-of-the-Year campaign and who knows where this team could go.

Except, Senzel still lingers in AAA, maybe coming up by early May, maybe picking daisies in Louisville’s centerfield until the presumed Super Two cutoff. And as for the other four? Puig is hitting .164, besting Peraza’s .154 but behind Winker’s .172 average. And of course Votto helms the quartet with a .227.

All four carry the weight of the Reds’ great expectations, and all four have pushed to carry the load. Yet still, they’ve faltered.

As Eno Sarris pointed out last week, Puig’s pressing falls in line with an observed phenomenon: After moving to a new team, players press. Sarris looked at players both historically and those who changed teams this offseason, concluding:

The good news is they’ll probably settle down. It might just take that good meal or that return to their old stadium or a phone call to their mom, but they’ll mostly regain their old swing rates and figure out how to help their new teams as they’ve helped their teams in the past. This isn’t to say their entire production level will return — age comes for us all — but swing rates are pretty steady once you zoom out on the seasonal level.

At the time, Puig came in second in Sarris’ pressing statistic of choice, percent change in swing rate, only behind Jose Peraza. Over the weekend, those positions shifted. 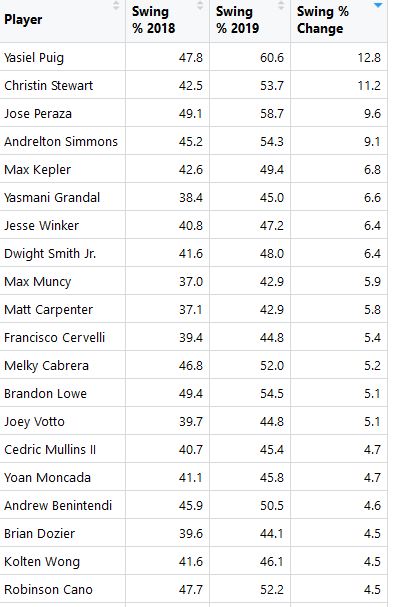 Puig now sits in first, one of two players with double digit percentage changes while Peraza has fallen back to third. Jesse Winker makes three Reds in the top 10, while Votto slips in at 14, albeit with only half the change of Peraza or Puig. If Puig’s woes are attributed to switching teams and hoping to make a splash early, then why are the other three holdovers struggling so badly?

I said it yesterday, but I’ll repeat today: Jose Peraza wants to hit dingers. Let’s follow the golden rule of peer-editing and critique Jose by going compliment, all lot of critiques, compliment.

First, compliment: Jose Peraza hit the first Reds dinger of 2019, and it was a beaut.

Watch how that ball flies. It’s a vintage Jose Peraza home run, yanked to the pull side and launched at 22 degrees. The ball travels a relatively low line drive, its peak height only 62 feet above the ground. And hit at 99 mph, it’s about as hard as Jose will ever hit a ball.

Now, the critiques. Jose Peraza has been trying to lift the ball, hitting 17 percent more fly balls than his career average. His average launch angle has also climbed six degrees above his career average. And even though his exit velocity average has stayed mostly constant, his hard hit percentage has dropped by six percent.

Obviously, Peraza is swinging more than his career mark, otherwise he wouldn’t have made this article, but it’s the quality of the swings that’s more concerning. He’s chasing pitches outside the zone at a rate 10 percentage points higher than usual, leading one to think he’s putting too much pressure on himself to succeed. Not only is Jose looking for big flies, but he’s being especially careful in doing so. The combination has left Jose with a strikeout rate nearly double his career average and lots of weak contact.

So why is Jose pressing? It probably has everything to do with Scotter Gennett. When Scooter went down right before the start of the season, Jose Peraza suddenly became the masher of the double play duo, not just the gravy. Peraza likely felt he needed to step into the 20+ homer, .500+ slugging percentage void Scooter left. It explains why a .348/.375/.587 spring suddenly turned into this pumpkin of an April.

Once the bats come around and Peraza does not feel the need to shoulder Scooter’s absence alone, a return to form should be expected. (I’m counting this as a compliment.)

Winker and Votto were supposed to be the one-two punch at the top of the order but have more closely resembled two free punch outs toward a free inning on an opposing pitcher’s loyalty card. But it’s those kind of expectations — Winker’s return transforms this lineup; Votto needs a bounceback for the Reds to get anywhere — that put overbearing pressure on players.

Since the Sarris article, Jesse Winker has tumbled into the top ten of pressers while hitting .154/.154/.615 with two home runs. He’s figured out the power portion of his game, now he just needs the walks to come back.

Through Sunday’s game, Winker ranks 156th out of 194 hitters with 3.65 pitches per plate appearance. Below him, fellow pressers Max Kepler, Andrelton Simmons, Puig and Peraza. Further, Winker has only seen 12 three-ball counts out of his 69 plate appearances. These are both team-wide trends for the Reds as Matt Wilkes pointed out on Twitter, but Winker, Puig, and Peraza have done the most to drag down the whole.

A natural thought would be to blame the Reds new hitting coach Turner Ward for the team’s propensity to swing often and at everything, but as Matt Wilkes points out again, that’s not the case. (Thank you to Matt for answering these questions before I started researching.)

In other words, we can't lay this solely at the feet of Ward. Players are pressing. https://t.co/tpXwkRxUAt

As for Votto, he’s been upfront about his swing not feeling quite right as of yet. When C. Trent Rosecrans of The Athletic asked about Joey’s fateful pop-up to the first basemen last week, Joey replied as such:

No, that’s a sign that my hitting technique is completely off. There’s a reason I just spent an hour hitting after a day game after a night game. It’s not good. It’s definitely not a good thing. I rarely do that. That’s why when I saw it, I was like, ‘ugh, I’ve got a lot of work to do.’ But I’m going to put in the work, I’m confident it’s going to come.

Like Winker, Puig and Peraza, Votto pulls down the Reds pitches per plate appearance average with a 3.86 of his own. It’s likely that Votto, knowing something is off with his swing, has upped his swing rate to get the reps in and figure out a groove. Pitchers know his bat isn’t as fearsome as usual right now, so his bat is tested more than his eye.

But both Winker and Votto have shown signs of life. Each have hit homers lately, and assuming Votto’s balky back lets him play, each now have a chance to play in the more hitter friendly Great American after four games in cavernous San Diego.

For all four of the pressers, the Reds less than auspicious start might actually work wonders. While winning makes the job easy, losing early takes off the pressure a bit. Okay, so what this team won’t run wire-to-wire? They can still give this fanbase more excitement than its had in half a decade. These four won’t press all season long, that much is assured. We as fans shouldn’t press for too much too soon either.