If there’s been a bright spot in the Reds’ frigid start to the year, it’s been the starting pitching. And anchoring that starting rotation is Reds Ace Luis Castillo. There were more than a few second guesses when Castillo was given the nod to start on Opening Day. Was he mature enough? Had he solved the issues that nagged at him to start the 2018 season? If the team was supposed to #getthepitching, why is a holdover from last season still our best pitcher?

Well, Luis Castillo has effectively shut down all of those naysayers with a blistering start to 2019. Through 30.2 innings, Castillo sports a shiny 2.50 FIP (56 FIP-), 3.26 xFIP (76 xFIP-), and a 34.2% strikeout rate. Those are all near the top of the MLB leaderboard through the first month-ish of the year, and are light years ahead of the numbers he had at this point last season. The walks are still an issue – his 11.7% walk rate is currently higher than his career average – but he’s done a pretty decent job at converting those walks into outs, currently leaving 87.4% of his runners on base to end his innings.

It’s safe to say that, should he keep these numbers up, Luis Castillo could be the Reds frontline starter for years to come. He’s under team control until 2023, his age 30 season. He’ll enter arbitration during the ‘20-’21 offseason, and if everything goes as planned for him, will receive an increased salary in ‘21, ‘22, and ‘23. So the Reds will be riding Castillo into his prime for a relative bargain. If that’s the case, why extend him, right?

The Elephant in the Room

We’ve gone this far into the article skirting around the elephant in the room, the Reds-Starting-Pitcher-Extension-Which-Must-Not-Be-Named. A guy named Bomer Hailey signed a huge contract extension after his age 28 season in 2014, and many of you consider it the worst contract extension the Reds have ever signed. It’s really hard to say how that contract would have looked had Bailey not been injured through most of it – but there’s no denying the fact that it ended up being a bad deal for the Reds.

However, if we all get in our time machines and head back to February of 2014, the deal certainly made a lot of sense at the time. Bailey was a really decent pitcher, coming off a 3.9 fWAR season in which he 3.31/3.34 FIP/xFIP. That 2013 season, of course, will likely end up being by far the best season of Homer Bailey’s career.

There aren’t a ton of similarities between Homer Bailey and Luis Castillo. Bailey was drafted and brought up through the Reds system, becoming a phenom top prospect and making his debut at 21. It seemed like he pitched for the Reds for 20 years before signing his extension. Luis Castillo had an almost perfectly opposite track with the Reds – he wasn’t drafted by the Reds, and only pitched in 14 games for the team’s AA team before getting the call up to the big leagues. He made his debut at 24, somewhat older in baseball years than the fresh faced rookie Homer Bailey. Bailey seemed to get a lot of his development done at the major league level, while Castillo entered the big leagues pretty much ready to go.

That last point is important. While Bailey pitched in the big leagues for 7 seasons before earning an extension, I’m proposing an extension for Castillo after only parts of 3 seasons – including only one full season. That’s because I believe Castillo is currently at the same point in his development as Bailey was when he signed his extension. Bailey was roughly a league average pitcher from 2009-2012, before the well above average season in 2013 which ultimately was the deciding factor in offering him an extension, rather than Johnny Cueto or Mat Latos.

Castillo has been slightly above average throughout his short career. His debut half-season was stunning – well above average, with a 84 FIP- and 79 xFIP-. But he took a step back in his first full season, regressing back to about league average (104 FIP-, 91 xFIP-). His 2019 is off to a very promising start, on track to be as good or better than Homer Bailey’s 2013 season. Let’s take a look at the Bailey extension. WARNING: This may cause some of you to grow ill. 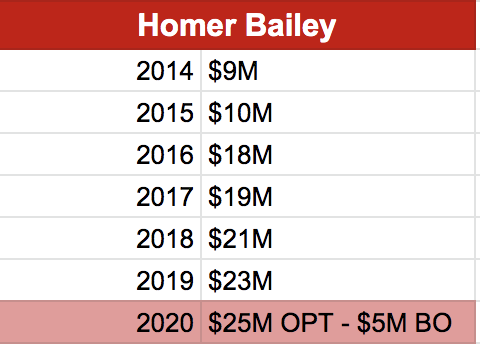 Yeah, not a good look. However, Bailey signed this contract 5 years ago at the age of 27 – just a year older than Castillo is now. If we’re saying Castillo is better than Bailey, shouldn’t Castillo make at least this much in a deal?

Luis Castillo is 26 years old – the same age as guys like Amir Garrett, Kris Bryant and Noah Syndergaard. He’s not exactly in the “young, bright stars” category, even though his major league career is relatively young. 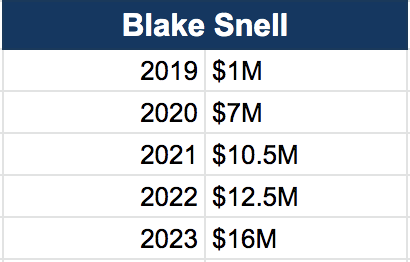 Wait – this guy got a Cy Young, and he was paid less than Homer Bailey? Even with incentives (Snell can make up to $2M more in that last season depending on award voting), the reigning AL Cy Young winner won’t even sniff the total amount of money Homer Bailey made with this contract.

This should make Reds fans a little more optimistic, and should make the importance of signing Castillo during this season even more obvious. Castillo looks like he’s putting things together pretty well this season – he might have finally figured it out. It’s not out of the question at all for Castillo to have a season similar to Snell’s 2018. Once that happens, his price goes up. If we’re talking fractions of the cost of the Snell contract to sign Castillo in April or May of ‘19, we’re entering no-brainer territory.

Of course, as I mentioned above, the Reds have Castillo locked up until his age 30 season in 2023. The team could theoretically just wait Castillo out, getting his age 26-30 seasons on the cheap before moving on or resigning him later.

Hold on a minute, though. Take another look at that Blake Snell contract. That’s the going rate for an elite, mid-20’s starting pitcher. It’s an AAV (Average Annual Value) of around $9.5M – and again, that’s the top of the scale. No one is going to make more than a guy coming off a Cy Young year, right.

Enter Trevor Bauer. Known for being a pretty, uh, interesting guy, Bauer’s chosen path to getting paid has been to utilize his right to arbitration every single year. Rather than signing an extension with the Indians, he’s decided to squeeze out every dollar he can before joining the free agent crop in 2021. At which point, he’ll reportedly continue to only sign 1-year contracts.

While the move might seem eccentric, it could very well net Bauer more money in the end. He settled with the Cleveland Indians in arbitration this past offseason, winning his arbitration case and earning a $13M salary for 2019. Take another look at the Blake Snell contract. That’s THIRTEEN TIMES the amount of money the reigning Cy Young Award Winner is making in 2019. Snell won’t make $13M until the very last year of the deal. Bauer made $6.5M in 2018, a number Snell will barely eclipse in the second year of his contract. Should Bauer continue at the current rate of his production, he’ll undoubtedly enter arbitration again in the offseason, at which point he’ll almost assuredly settle to make more than $13M for the 2020 season, at which point he’ll have made WAY more money through three years of arbitration than the $17.5M Snell will have through his first three years of his contract.

The point I’m trying to make here is that arbitration isn’t necessarily cheap, especially for top-line starters. Luis Castillo could very well be worth just as much as Trevor Bauer is at the end of the season. Signing him to an extension now, before he gets a chance to use a full season of ace-like statistics in his favor, could dramatically reduce costs for the Reds.

A Contract for La Piedra

Luis Castillo certainly has shown the stuff, the mentality, and the coachability to be ‘La Piedra’ for the Reds pitching staff for years to come. So, what does that look like in contract terms? Here’s what I suggest: 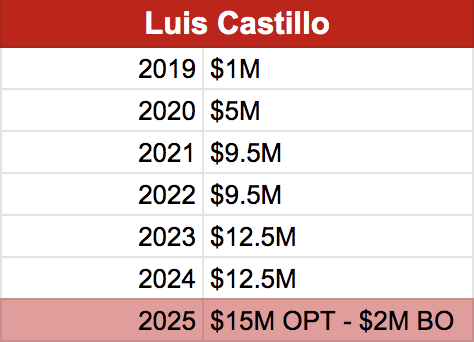 This contract would buy out Castillo’s last two pre-arbitration season (‘19 & ‘20), all three arbitration seasons (‘21-’23), and either one or two years of free agency, with a team option in 2025, Castillo’s age 32 season. That’s likely his entire prime at a pretty good price, when you consider the rising tide of arbitration.

What do you think? Are the Reds ready to dip their toes back into the pitcher extension waters? Is Castillo capable of pitching well for that long? How do you feel about the money? Let us know in the comments!