This year represents the fifteenth Opening Day that we’ve celebrated here at Redleg Nation. Fifteen consecutive seasons that Reds fans have bounded through the gates at Great American Ball Park, filled with excitement and optimism over the possibilities of the upcoming baseball campaign. This is going to be our year!

Sure, Cincinnati’s record over the first fourteen seasons in the Nation’s history is 1,077-1,191, and more than a generation of fans haven’t seen the Reds win a playoff series…but we just can’t help ourselves every spring. As Opening Day approaches, Reds fans always seem to get a little over-enthusiastic about the club’s chances.

I remember the first Opening Day I ever attended, back in 1993. Jose Rijo pitched eight shutout innings, Chris Sabo hit a homer, and Rob Dibble surrendered a mammoth home run in the ninth. The Reds won 2-1 and it snowed much of the day, but we were sure that the win was going to launch Cincinnati to a second World Series championship in four years.

The Reds lost 89 games that year.

On Opening Day 2005, we had just launched this silly little website and hopes were high that we were going to have a fun team to cover. Here’s something I posted the day before the season began: 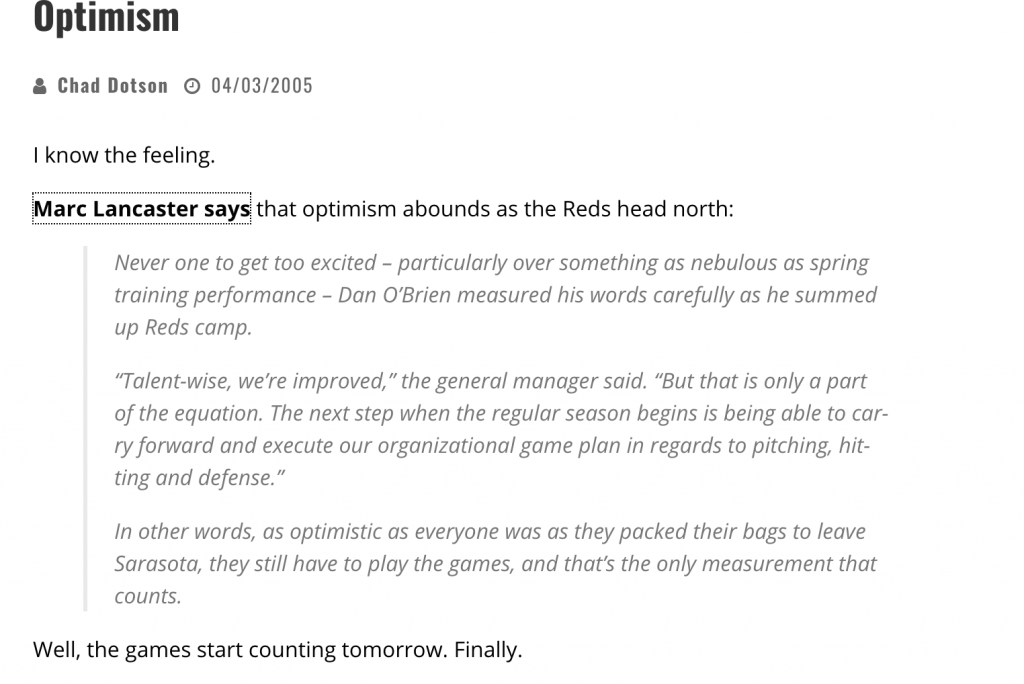 The next day, Adam Dunn hit two home runs, a packed GABP chanted “who’s your daddy” to Pedro Martinez in unison, and Joe Randa delivered a walk-off homer to defeat the Mets, 7-6. Here’s my report, which is strange to read all these years later. 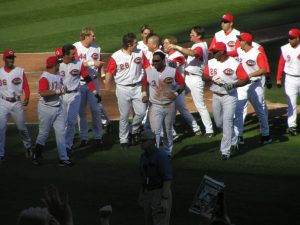 I vividly recall leaving the park after that game, exhausted and absolutely sure that the walk-off win was an omen that the Reds were going to surprise everyone that year. After all, they were such a fun team with so many great personalities; not just Dunn and Randa, but Sean Casey and Ken Griffey Jr. and Austin Kearns and Aaron Harang (and, ummm, some other pitchers). Finally, the good guys were headed for a fun season.

The Reds lost 89 games that year.

Which brings us to 2019, our fifteenth Opening Day. At the end of last season, after five full years of simply awful baseball, my optimism had been completely exhausted. I had none left to give. And if you had told me then that the Reds were going to play cynical service time games with Nick Senzel again this year in a bid to save Bob Castellini a bit of cash in 2025 — as they did last week, to my consternation — I feel like I would have probably given up and spent my discretionary income on FC Cincinnati gear and tickets instead of the Redlegs.

And yet…here we are. I’m definitely irritated by the Senzel saga and it really dampened my enthusiasm for Opening Day. But the Reds did so much during the off-season to improve this club, I can’t help but be irrationally optimistic. It’s what I do this time of year.

So let’s do this. Here are the five biggest reasons that I’m optimistic about watching the latest edition of Cincinnati Reds baseball.

I’ve been pretty enthusiastic about every single hire the Reds have made since dismissing the Not-So-Dynamic Duo of Bryan Price and Jim Riggleman last year. David Bell has been a breath of fresh air, evidencing a mind that is wide open to every advanced analytic concept that can be found in a spreadsheet. There is also reason to hope that Bell, who has been in many big league clubhouses during his career as a player and coach, will be able to translate the new direction of the front office to the players on the field. A lack of communication between front office and the playing field was a very real problem with the previous administration, and I’m really interested in seeing how Bell impacts the actual games.

I’m certain there will be times when I am befuddled by a decision made by Bell. The early returns, however, are good. I mean, look at this Opening Day lineup!

Just as exciting to me is the way president of baseball operations Dick Williams and general manager Nick Krall joined with Bell to fill out the rest of the staff. Derek Johnson is one of the most well-respected pitching coaches in the game. Turner Ward has a similar reputation as a hitting coach. Stealing those two from the Brewers and Dodgers, respectively, was an underrated coup.

But it didn’t stop there. The Reds have a “Game Planning Coach” now, Jeff Pickler. I don’t even know what that is, but I love it. Former Red Caleb Cotham is the assistant pitching coach, tasked with helping communicate all the new technology the Reds have obtained with the pitchers and how it can help them improve. Will any of this mean more wins? I don’t know…but I’m optimistic.

Matt Wilkes has begun making the case for how Castillo can become an ace. Reading that gets me antsy with anticipation. That fastball! That changeup!

Castillo has shown flashes over the last couple of years as to what he can be. He’ll be 26 years old this season, and you don’t have to squint very hard to see him finally coming into his own. This will be Castillo’s second full season in the majors, and I’m feeling optimistic that he will reach full maturity in 2019, and become the guy that Jeff Sullivan described thusly just one year ago:

What is important to the Reds is that the only thing Luis Castillo has left to do is keep on staying healthy. He already has the arm. He already has all of the pitches. Eight months from now, it might not be very hard to identify the best starting pitcher in the NL Central. Castillo simply has to keep himself together.

I have a good feeling about this.

His Instagram account is legendary. He licks bats and flips them, too. He embraced Cincinnati immediately upon his arrival, and the Queen City returned the love. Puig is your friend.

He’s also a pretty good baseball player. Puig was an All-Star almost immediately, playing at a very high level — .305/.386/.502, 151 OPS+ — in his first two seasons (at the ages of 22-23). He’s 28 now and while he hasn’t reached those early numbers in the years since, he remains a productive hitter (.264/.337/.490 and 119 OPS+ the last two years). He’s in the final year of his contract, motivated, and playing in a park that encourages home runs for the first time in his career. I’m, yes, optimistic that he’s going to be a dynamic presence in the middle of Cincinnati’s order.

Pretty much all of the mathematical projection systems see the Reds as a .500 team, middle of the pack in the National League Central. But those same systems see the Central as the tightest division in baseball, top to bottom.

So while I don’t necessarily expect the Redlegs to make the playoffs, only a few things would have to go right in order for the Reds to make a push for October baseball. Meaningful games in September? Color me optimistic.

We may never again see another hitter as good as Joey Votto in a Cincinnati Reds uniform. And I’m here to guarantee you that he is going to return to form in 2019. We’re going to see vintage Votto.

And he’s already trolling everyone who says he’s begun an age-related decline:

Votto is an international treasure, and I can’t wait to watch him play every single day.

Ultimately, the Reds may limp to the October finish line once again. If so, I’m sure we’ll have plenty to say about that here at the Nation. But now, with the sun appearing over the horizon on the annual Cincinnati Opening Day holiday celebration, feel free to give in to your impulses. Get excited.

It’s going to be a great season. Our guys are finally going to be back in the playoff hunt, and even better, they’re going to be fun. I choose to be optimistic. For now, anyway.