If you listen to the Redleg Nation podcast you heard this question posed in the latest episode. If you don’t listen to the Redleg Nation podcast, what are you thinking? Go subscribe to it right now. During the segment of viewer mail, the question was asked to Chad and Bill if the Cincinnati Reds should sign top prospect Nick Senzel to a long term deal right now. Chad and Bill were split on the decision, but more on that later.

Nick Senzel has not played a single inning of Major League Baseball. He’s only played about half of a season of Triple-A baseball. That half season was pretty darn good, though. The then 22-year-old hit .310/.378/.509 for the Bats in 193 plate appearances to go along with eight steals. By just about any measure, he’s ready to play in the Major Leagues right now. He was ready to do that last year.

But back to the question at hand: Should the Cincinnati Reds sign Nick Senzel to a long term deal? There are some pros and there are some cons. Let’s start with the pros.

There are some cons to such a deal, too. Let’s look at some of those:

The pros list certainly has more on it than the cons list. But that doesn’t mean there isn’t some risk involved, either. For both the Reds and for Nick Senzel. To dive into the risk, we need to look at contracts signed by players before they reach the Majors or almost directly after they made their debut. The list is pretty small.

It began with Evan Longoria just over a decade ago. In 2008 he signed a deal for $17.5M for the first six years of his career. That deal also included three option years after that worth $7.5M, $11M, and $11.5M each. Longoria was a similar prospect to Nick Senzel. He was the 3rd overall pick in the draft in 2006, and a top 5 prospect in all of baseball. He was a tad younger than Nick Senzel is today when he signed his deal – but by less than a year.

Last year the Philadelphia Phillies signed one of their top prospects, Scott Kingery, to a contract before he ever played in the Major Leagues. He had been a second baseman in the minors, and was about to turn 24-years-old (he did so in April of 2018). Kingery was ranked in the 30’s heading into the year, so he was a very good prospect, but not quite on par with Longoria or Senzel.  He signed a 6-year deal worth $23M. Like Longoria, his deal also included three option years. His were worth $13M, $14M, and $15M each. There’s a $1M buyout on that first option year, but not the others.

Using those two deals as the framework, it seems like the Cincinnati Reds would probably need to do something similar. 6-full years, then 2-3 option years. Using the Kingery model since it’s closer to todays payscale, maybe it looks something like this: 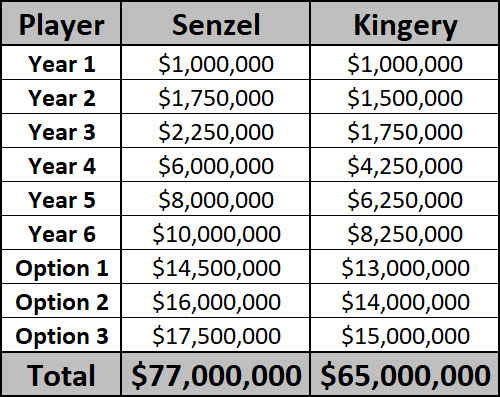 With Nick Senzel being a year younger, and more valuable as a prospect than Scott Kingery was entering the contract, you probably have to pay him more. Perhaps you have to make the second and third options mutual options. The framework, however, is there.

Let’s get back to some of the risk here from the team side of things. Look at the deal that Scott Kingery signed last spring before ever playing a Major League game. Last year he hit .226/.267/.338 in 147 games for the Phillies. He was worth -1.4 WAR or -0.1 WAR depending on which version you prefer. Either way, though, he was very, very bad. And that didn’t hamstring the Phillies in terms of payroll, but it also meant that they kind of felt the need to not send him to the minors when he was clearly in over his head.

His Triple-A performance the year before wasn’t like that of Nick Senzel. He wasn’t nearly as good, showing questionable strikeout-to-walk ratios and posting a .786 OPS in half of a season. And prior to 2017, he had never hit anywhere he had ever been as a professional. But he was a former 2nd round pick out of college and had the pedigree. The Phillies gambled that his 2017 was real, and at least for 2018, they lost. And they lost big. That’s a lot of money they owe to someone who just posted a .605 OPS in the Major Leagues. He’s young, and it’s still early in his career, but they probably aren’t feeling great about it right now, either.

For Cincinnati, at least in terms of expected production, they probably feel better. Outside of his two weeks spent in Billings after not playing for a month after the draft, Nick Senzel has raked everywhere he’s been. He’s a career .314/.390/.513 hitter in the minors since being drafted. There are zero red flags on his resume when it comes to performance.

The uncertainty, however, could be with his health. While his 2018 season did end because of an injured finger, and he ultimately lost out on playing in the Arizona Fall League because he had elbow surgery to remove bone spurs, it’s the vertigo that is the most concerning. Nick Senzel has stated that he and his doctors have a plan in place that will take care of it moving forward. I’m not a doctor, and won’t pretend to be one. But his 2017 season ended with two weeks remaining because of vertigo complications. And he missed nearly all of May in 2018 with complications due to vertigo, too. The finger injury? The elbow injury? Those shouldn’t be concerning. The vertigo issue, however, should at least be slightly concerning.

Personally, if Nick Senzel would sign the contract proposed above, I’d get it printed and in his hands quicker than I typed this sentence. The risk against his vertigo being that huge of a problem is 100% worth it. He’s as safe of a prospect as the Reds have seen since at least Johnny Cueto, if not longer. That, however, doesn’t mean that Senzel would accept it. If I were him, I’m not sure that I would. I’d consider it, though.

There’s a lot of uncertainty in the free agent market right now. Teams are skewing younger and younger. Would the next collective bargaining agreement change how players are paid? By that time Nick Senzel will be beyond his “truly cheap” contract years. And he could have some big money at the back of his deal in a new time where guys aren’t getting that into their 30’s anymore.

But, that deal could also leave Nick Senzel entering free agency as a 30-year-old (who would turn 31 in his first season of a new contract at the mid-way point). It could leave him with a chance to still cash in on free agency of sorts, no matter what. There’s a lot going on here and you could see how it could play well for the player and the team.