The long slog towards the finish line continues for the Reds, with the games that come and go becoming something like the slash marks a shipwrecked survivor might make to count the days which have passed. All thatÃ¢â‚¬â„¢s left is a somewhat ignominious race among the lesser teams in baseball. The prize, of course, is selection number one in the first round of next yearÃ¢â‚¬â„¢s Rule 4 draft. 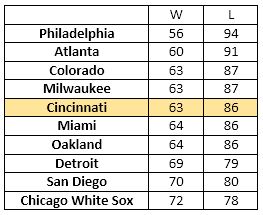 As it currently stands, the Reds are comfortably lined up to snag a pick in the top ten. ItÃ¢â‚¬â„¢s reasonable to be confident theyÃ¢â‚¬â„¢ll land in the top fiveÃ¢â‚¬â€Cincinnati has the toughest remaining schedule of the bunch, featuring three games each against the Cubs and Pirates, four against the Mets, two more against the Cardinals, and one versus the Nationals thrown in for good measure. That doesnÃ¢â‚¬â„¢t mean itÃ¢â‚¬â„¢s likely theyÃ¢â‚¬â„¢ll tumble all the way to picking at 1-1, but a pick between 1-3 and 1-6 seems relatively certain.

Pick number three overall sure ainÃ¢â‚¬â„¢t a bad spot to be in. Recent history is full of distinguished #3 picks, among them Manny Machado, Eric Hosmer, and Evan Longoria. Of course, thereÃ¢â‚¬â„¢s always risk. The only time the Reds had pick 1-3, they took Chris Gruler in 2002. On the other hand, the only time the Reds held the fourth overall pick, they drafted a Wolverine and future Hall-of-Famer named Barry Larkin in 1985.

In no other pro sports draft is drafting the best player available more important than with Major League BaseballÃ¢â‚¬â„¢s. The uncertainty is so strong, the risk is so prevalent, and the development period is potentially so long that drafting based on immediate needs is rarely wise. That being said, when there are notable holes in oneÃ¢â‚¬â„¢s organizational depth chart, the Rule 4 draft is an awfully easy way to try to fix them.

2016Ã¢â‚¬â„¢s draft is so far away that thereÃ¢â‚¬â„¢s not a whole lot of benefit in trying to predict who Cincinnati will select next June. But we do know a few things:

That last point has plenty of time to be proven wrong, as a solid college or prep season could give a player a lot of helium in the summertime or the talent likely to populate rounds two through five could take a collective dip in value. For the time being, though, it looks a lot like the opposite of last yearÃ¢â‚¬â„¢s draft classÃ¢â‚¬â€not much elite talent, but more hitting prospects and later-round value overall. And, on the other hand, injuries or signability concerns could cause the Reds and other to pass on someone currently considered a top talent. What remains of this article should serve as a primer for a handful of promising bats to know for the months ahead (thatÃ¢â‚¬â„¢s not to say the Reds wonÃ¢â‚¬â„¢t pick a pitcher at 1-4, but for the purposes of contributing to Walt JockettyÃ¢â‚¬â„¢s Ã¢â‚¬Å“up and runningÃ¢â‚¬Â by 2017 mentality, weÃ¢â‚¬â„¢ll save analyzing them for some time next year, closer to the draft). Consider them a first crop of players to keep an eye on; they’re certain to be of some interest to the Reds should they maintain their current trajectories.

Perhaps the name to know among the positional prospects, Banks built well upon his freshman season with the Aggies to post the line you see above in his sophomore season. At the plate he has a nice, short swing from the left side that produces solid line drive power in games. His batting practice power seems to hint at more loft (and thus more homers) to be tapped into. He has plus speed (which has led him to pay a lot of center field collegiately) and a fantastic arm, which may lead him to plying his trade in right field over the long run.

The one thing with Banks is what you see is what you getÃ¢â‚¬â€thereÃ¢â‚¬â„¢s not much physical development left for him at 6Ã¢â‚¬â„¢0Ã¢â‚¬Â, 200 pounds. Thus, scouts donÃ¢â‚¬â„¢t see his game power increasing significantly in the pros. Hunter Pence is one comparable for what kind of hitter Banks will become and names like Brett Gardner and Lorenzo Cain are often tossed around when describing him, as well.

Boldt is big for a center fielder (listed around 6Ã¢â‚¬â„¢2Ã¢â‚¬Â 212 lbs.) but flashes above-average speed often enough. Power is lacking in his toolkit (although his raw power rates around average), but he has a great deal of the other four. He handles the bat very well and exhibits advanced discipline at the plate. HeÃ¢â‚¬â„¢ll need a bit more pop to stick in the majors as anything more than a fourth outfielder, but the frame is there for him to find a little bit more within his mechanics.

Despite the fact that his 6Ã¢â‚¬â„¢0Ã¢â‚¬Â, 183-pound frame speaks to his speed-oriented game, Fraley has above-average raw power that could be tapped into with coaching. The lefty outfielder showed a real knack at the plate in 2015, particularly posting such a low strikeout rate in the stacked SEC (which featured four other teams ranked #11 or higher at the end of the season in addition to LSU). And of course, he has fantastic speed both in the field and on the basepaths.

Fraley certainly projects as a center fielder in the pros. His tools should remind more than a couple folks of former Redleg Drew Stubbs.

Abreu, a former teammate of Cubs prospect Albert Almora, was actually drafted by the Reds in the 14th round of the 2013 draft. Obviously, he did not sign, and has built his stock up with two solid years at The U.

Much like Fraley and Boldt, Abreu has a good feel for hitting, a solid arm, and more power than heÃ¢â‚¬â„¢s shown in games to this point. HeÃ¢â‚¬â„¢s been a notable hitting prospect since high school and scouts are generally high on his smooth lefty swing and repeatable swing mechanics. His numbers, though, may not be impressive enough to merit consideration for taking him within the first ten picks.

When Kris Bryant comes up as a comparable for a prospect, thatÃ¢â‚¬â„¢s certain to generate some serious interest. Dalbec fits the bill physically (6Ã¢â‚¬â„¢4Ã¢â‚¬Â, 215 lbs.) and with regards to his power (largely rated around 65-70 on the 20-80 scale). He has the arm to stick at third base, but perhaps not the glove.

Regardless, that bat is going to let him play somewhere on the diamond (the smart money is on first base), but that may dissuade Jocketty and the Reds if they donÃ¢â‚¬â„¢t think he can stick at third or left field. The metrics back up the gut feeling about DalbecÃ¢â‚¬â€that strikeout rate and slash line screams Chris Davis or someone like him.

Last season was a vast improvement for Reed, who raised his OPS almost .200 points from 2014 in ten more games. His toolkit, much like FraleyÃ¢â‚¬â„¢s, says heÃ¢â‚¬â„¢ll be a center fielder if he becomes an everyday MLB starterÃ¢â‚¬â€the speed, arm, and glove are all above-average or better, with his arm strength as the show-stopper of the bunch. The bat will need some work to be productive in the pros, but the improvements from 2014 to 2015 are encouraging.

Though somewhat undersized at 5Ã¢â‚¬â„¢11Ã¢â‚¬Â, 185, Ray is a pure athlete with a mouthwatering power-and-speed combination. He parlay a solid freshman year into locking down a starting gig last year, playing in 22 more games and boosting his slugging percentage by .062 points (although he did shed .027 points off his on-base percentage).

His raw power, which has started to translate to in-game production (he hit 11 times as many homers in just over three times as many at-bats), is going to give his draft stock the biggest boost up the rankings. Ray may end up being one of the highest-risk/highest-reward draftees in the first round, as he has a real shot at developing five above-average tools in the pros.

The prep hitters have a little less information out there on their abilities and tools, so this will serve as a quick rundown on the top three.

Rutherford is the only name to rival Nick Banks at the top of the pile and may be the ultimate prize if he can continue to build his legacy (which stems from a tantalizing Bryce Harper comparable). At 6Ã¢â‚¬â„¢3Ã¢â‚¬Â, 190 he has a great frame to grow into a little more. Many scouts think he already has better tools than Banks, placing him just a hair better in the hit, power, and speed departments. Ã¢â‚¬ËœEffortlessÃ¢â‚¬â„¢ is a term tossed about a bunch with Rutherford and another impressive year may make him the first position player to go in the first round.

Beer is a rapidly-rising Georgia prospect committed to Clemson. A former swimmer who set a national record for 11-12 year olds, scouts have had their eyes on him for a while. Another lefty on the lean side but with potentially above-average power, Beer probably wonÃ¢â‚¬â„¢t be compelling enough to take in the top five, but could be a good option should the Reds fall closer to pick 1-10.

Mendoza is a lanky 6Ã¢â‚¬â„¢4Ã¢â‚¬Â who has just started to fill out his frame. HeÃ¢â‚¬â„¢s got some natural feel for hitting to pair with his solid glove. Nobody will expect a ton of power from him, especially if he sticks at short in the pros, but it is starting to pop up in gameplay (most notably two homers off of pitching prospect Brady Singer earlier this year) and will only increase his current and future value.