The first set of 2017 projections were recently released. The Steamer projections are now up on Fangraphs. One of the more popular projection systems, ZiPS is still likely a few weeks out (they were released on December 11th last season for the Reds). ZiPS is typically known as more reliable, while Steamer is typically more pessimistic. So take these for what they are. 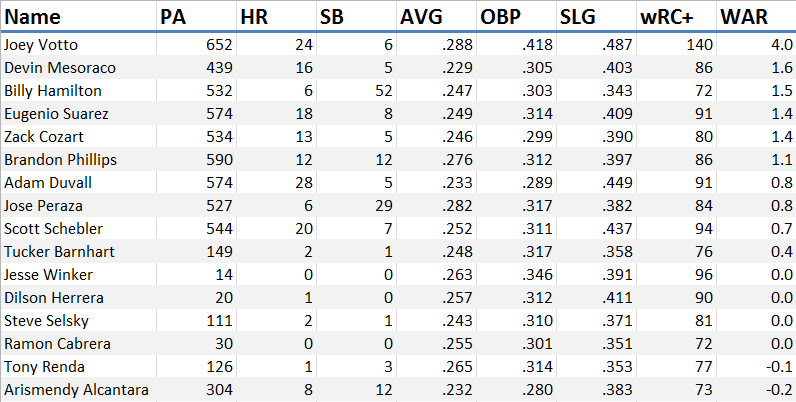 Joey Votto is the only projected above average hitter, which is very scary. The good news is that Votto’s 140 wRC+ is the 5th highest projection in baseball (Trout-162, Harper-147, M. Cabrera-147, Stanton-141). The second best hitter in the projections is actually Jesse Winker, which is very encouraging (although he is only projected for 14 PA). Winker is projected to put a .346 OBP, which would be very nice.

The most interesting thing from the projections is that Jose PerazaÃ‚Â (84 wRC+) is better than Zack CozartÃ‚Â (80 wRC+), andÃ‚Â Dilson HerreaÃ‚Â (90 wRC+) is better than Brandon PhillipsÃ‚Â (86 wRC+). I would assume the Reds internal projection system shows at least something similar, which probably is one of the driving forces in jumping to the young movement in the middle infield.

The offensive projections are not great for the Reds. The Reds have several hitters within the “margin of error,” but the Reds would have to significantly beat the projections to have a good offense in 2017. The Reds should do everything they can to move Cozart and Phillips before the season starts to at least have upside at those positions. If that happens, the Reds would have an entire starting lineup under 30 years old, minus Votto at 33. The possible mid-season lineup below might not be great in 2017, but nearly every position except 1B and C should be fully on the up-tick.