In the buildup to and aftermath of the Trade Deadline, Anthony DeSclafani has quietly posted his two finest starts since April 20Ã¢â‚¬â€against (arguably) the best team in baseball, no less.

Disco had been mired in mediocrity prior to that, coming off a recent glut of outings where he was very hittable, throwing too many pitches to work deep into ballgames, or both. A seven-inning outing in Colorado (7 H, 3 ER, 3 BB, 9 K) on July 24 did well to break his string of starts in which he failed to stay in the game that long (seven straight of 6.2 IP or less from June 9-July 18) and since heÃ¢â‚¬â„¢s shone in two straight starts facing St. Louis. Combined, he threw 13 innings, allowing 10 hits and just three walks (a 1.00 WHIP) while notching 12 strikeouts.

HeÃ¢â‚¬â„¢s been mostly a four-seamer/slider pitcher after scrapping his curveball for the most part (he still throws it sparingly), but this season DeSclafani has gradually utilized his two-seam fastball more and more. ItÃ¢â‚¬â„¢s a very useful pitch, with its arm-side run complimenting his slider and rather straight four-seamer quite well, and even more useful for shoring up one of DiscoÃ¢â‚¬â„¢s weaknessesÃ¢â‚¬â€facing left-handed hitters. 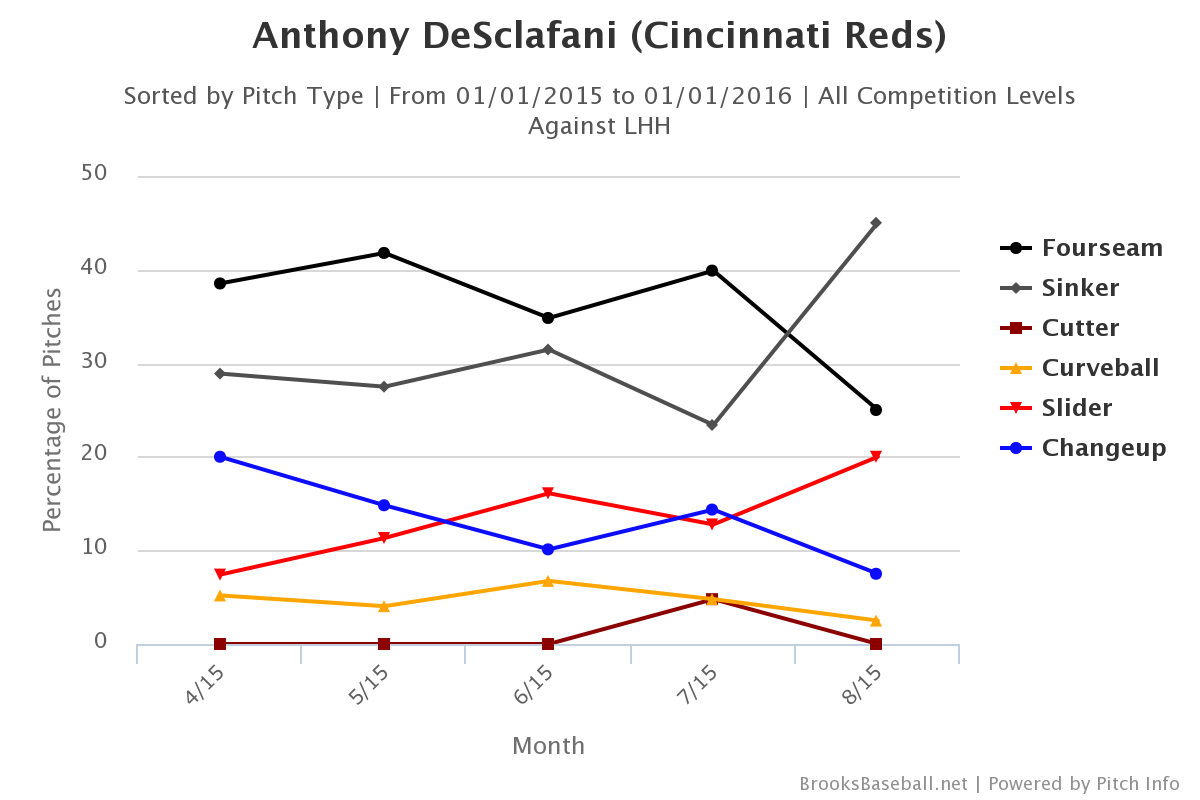 Obviously, that spike in August is the result of a single start in which DeSclafani leaned heavily on the two-seamer, but he started employing it more in his July 29 start against the Cardinals.

HereÃ¢â‚¬â„¢s his pitch chart for July 29, split by batter handedness, with the pitches righty hitters saw in the first frame (look for the cluster of sliders on the lower right-hand side of the chart):

Two things you can immediately see. First, you can see the difference in his game plansÃ¢â‚¬â€namely, sliders low and away to righties set up by his other offerings inside and plenty of two-seamers to lefties, either coming back over the plate from the inside corner to freeze them or (more so in the August 4 start) starting middle-in and tailing away to induce whiffs or weak contact. Second, he’s gaining better command with his two-seamer and is now more comfortable throwing it to both sides of the plate. That second conclusion isn’t exactly manifest from just two starts, but his month-to-month tendencies back this up (with the exception of July, when he didn’t use the pitch much early in the month):

Getting left-handed hitters to swing and miss has been a bit of a stumbling block for DeSclafani, but it wasnÃ¢â‚¬â„¢t in his last start:

And when heÃ¢â‚¬â„¢s able to crank up the two-seam fastball up around his four-seamerÃ¢â‚¬â„¢s velocity (92-94), he can fool both lefties and righties with it:

The diversification and improvement of Anthony DeSclafaniÃ¢â‚¬â„¢s repertoire was likely the game plan for him all season. Seeing him reprioritize his pitch selections is an encouraging sign, as heÃ¢â‚¬â„¢s learning how to prepare for teams and tailor his arsenal to what is likely to keep opposing hitters off-balance. Using the two-seamer isnÃ¢â‚¬â„¢t the only solution, but itÃ¢â‚¬â„¢s an awfully good one with that slider Disco possesses. If his changeup can improve similarly, heÃ¢â‚¬â„¢ll have a lot of job security even with all the young pitchers coming up now through the farm system.