Search
Home
Spotlight on the Future

A team on the verge of disassembly invariably begs questions of its future.

We know that next year the Reds will be sans Johnny Cueto, Mike Leake, Marlon Byrd (unless, somehow, that option vests), Brayan PeÃƒÂ±a, Manny Parra, and Sean Marshall with Skip Schumaker ($2.5MM club option, $500k buyout) and Burke Badenhop ($4MM mutual option, $1.5MM buyout) as likely departures as well. ThatÃ¢â‚¬â„¢s seven spots opening up on the 25-man roster without a trade even having to happen.

ThatÃ¢â‚¬â„¢s not a ton of starting lineup turnover, though. Mesoraco should regain the catcherÃ¢â‚¬â„¢s job with health (only time will truly tell, though), leaving just left field to be filled. The rotation loses two stalwarts, but the Reds have already seen five other youngsters make starts this season and four of them (Iglesias, DeSclafani, Lorenzen, and Moscot) should start the season behind Homer Bailey in the 2016 rotation. ThatÃ¢â‚¬â„¢s not even counting Robert Stephenson, top pitching prospect, making enough progress to merit consideration.

This is exactly what Mike, Steve, Grant, the Nicks Carrington and Kirby, and myself have been flapping our proverbial gums about over the last few weeksÃ¢â‚¬â€what does the future look like and how can the Reds shape it into the best-case scenario? Can they reload on the fly for 2016? Should the front office kill their darlings and trade all the high-value talent while they can? When can we expect positive results?

My family and I moved to Cincinnati something like a month and a half prior to 1999Ã¢â‚¬â„¢s game 163. After being welcomed to the city with the faintest taste of the baseball postseason, the next several years were pretty disappointing. So I began to learn about prospects. I had sky-high hopes for Drew Henson. I was champing at the bit for the arrivals of Austin Kearns, Adam Dunn, and Drew Stubbs. I loved the name Gookie Dawkins. I was crushed that Ty Howington and Chris Gruler never worked out. It wasnÃ¢â‚¬â„¢t anything that led to playoff wins, but it was hope.

So, now, independent of reality or trade possibilities, I find myself doing the same, plugging names into projected blank spaces on future depth charts. 2016 holds a glimmer of promise as Mike wrote a week agoÃ¢â‚¬â€a potential that the remaining core and a cherubic pitching staff can have almost everything go right for a year. 2017 marks the departure of Aroldis Chapman, the almost-certain installation of Robert Stephenson near the top of the rotation, and the walk years for four starting position players: 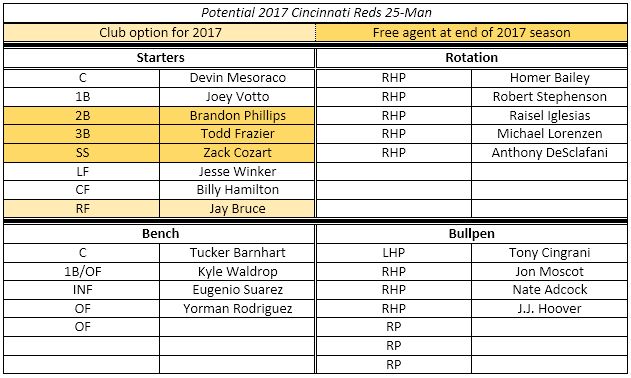 Without even considering possible youngsters the Reds get in their 2015-2016 trades, thatÃ¢â‚¬â„¢s a team with some intrigue and possibility. Winker and Stephenson should have at least a cup of coffee in the majors under their respective belts at that point. Rodriguez and Suarez may have supplanted Billy and Cozart in the starting lineup if the former lives up to his potential and the latter maintains the form heÃ¢â‚¬â„¢s had so far in 2015. Kyle Waldrop may be a great backup first baseman/corner outfielder/bench bat. Moscot or Cingrani could take one of those rotation spots if DeSclafani, Lorenzen, or anyone else is injured or ineffective. Amir Garrett might also be ready by this point and supplant one of the aforementioned starters on his talent alone. 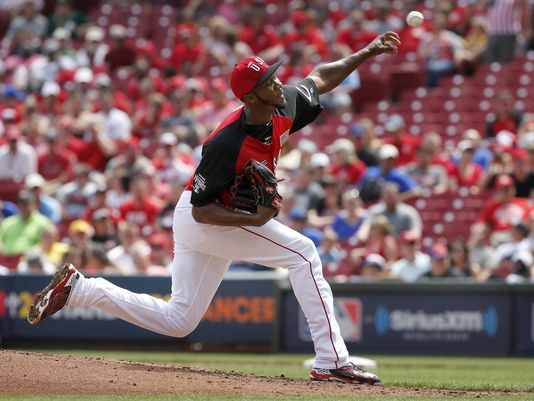 Amir Garrett at the 2015 Futures Game

ThatÃ¢â‚¬â„¢s not too bad, considering weÃ¢â‚¬â„¢re patching the boat just with what the Reds already have on hand. Now add some of the prospects weÃ¢â‚¬â„¢ve tossed around in theoretical returns for Chapman, Cueto, and Leake. Daniel Norris or Kyle Zimmer right behind Stephenson in the rotation. Brett Phillips or Nick Williams pushing Winker and Bruce at the corner outfield spots. Willy Adames forcing Brandon Phillips to a bench role. Keone Kela joining Hoover and Adcock at the back end of the bullpen. If any of those specific names arrive in a trade, it will likely only be one of them (maybe two if weÃ¢â‚¬â„¢re lucky), but the possibilities are delightful. 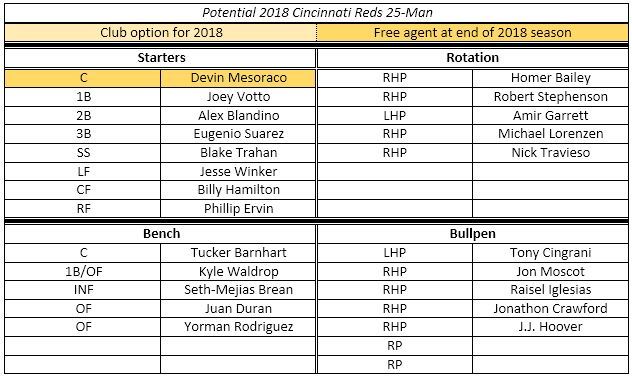 The youth movement is fully on at this point. Blandino, Trahan, and Ervin could all take the vacated starting positions if they maintain their current trajectories. If not, Waldrop or Mejias-Brean could take a hack at starting. Travieso joins Garrett in making the jump to Opening Day rotation member, possibly pushing Iglesias and DeSclafani to the bullpen. ItÃ¢â‚¬â„¢s also perfectly reasonable to think the Reds can re-sign Frazier with Phillips and BruceÃ¢â‚¬â„¢s commitments off the books, thus creating a competition between Blandino, Trahan, and Suarez for the two middle infield spots. Or, Frazier is traded the season prior for a closer or right fielder. 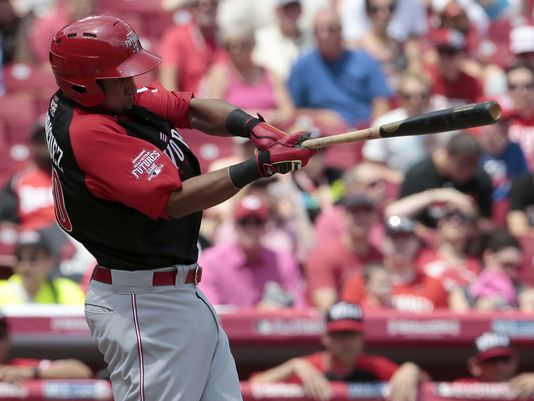 Can Yorman live up to his physical potential?

The lineup lacks a little in the power department but seems primed to post a good on-base percentage and spray some line drives. The infield defense is still pretty solid even after losing Cozart and the outfielders flanking Hamilton have decent range for their positions. The rotation is power, power, powerÃ¢â‚¬â€all five sit comfortably 92-94 MPH or better with their fastballsÃ¢â‚¬â€and should rival the PiratesÃ¢â‚¬â„¢ Cole/Taillon/Kingham/Glasnow quartet of homegrown starters. The bench and bullpen should be good enough with the homegrown talent that only a couple veteran relievers and a bench bat or two need to be brought on board. And, again, thatÃ¢â‚¬â„¢s not counting who may arrive in return for everyone traded in the two and a half years prior.

This is just a fun exercise in what the team might look like soon enough and feeling the thrill of possibility. I wonÃ¢â‚¬â„¢t be the first or last to remind myself and everyone that prospects are never a sure thing to perform in the majors. This franchise may lose a ton of games between now and 2019 as they try to figure out which of these youngsters can help make the Reds a winning team again. But thereÃ¢â‚¬â„¢s always the possibility that players surprise and outperform their projections and the untarnished gleam of a future not yet fraught with disappointment. Regardless, thereÃ¢â‚¬â„¢s nothing wrong with getting a bit excited about whatÃ¢â‚¬â„¢s to come.