The dramatic, energized, and sometimes even violent nature of baseball ejections createsÃ‚Â a spectacle that few other sports can offer. Indeed, baseball umpires have tossed more players and coaches than the other three major North American sports, combined. Yet has MLBÃ¢â‚¬â„¢s use of instant replay robbed (or saved, depending how you view ejections) baseball of one of its unique aspects of the game? TodayÃ¢â‚¬â„¢s Ã¢â‚¬Å“thinking inside the boxÃ¢â‚¬Â takes a look at what happens when players and coaches disagree with umpires in their assessment of what happened in the batterÃ¢â‚¬â„¢s box.

MLB has an interesting history of umpires ejecting players. Prior to 1889, when baseball Ã¢â‚¬Å“arbitersÃ¢â‚¬Â were given the ability to remove players or coaches fromÃ‚Â games, players and coaches were quietly encouraged to verbally (and sometimes physically) abuse umpires. The league believed this rowdy style of play encouraged fans to identify with their teams and initially looked the other way when players or coaches would yell at or spit on umpires. Predictably, this relationship with authority could not last forever, and buoyed by concerns that baseball was becoming non-family-friendly and faced with a dwindling supplyÃ‚Â of volunteer umpires (who could have seen this coming?), Major League Baseball decided to empower their on-field arbiters to remove players from games and dock them their dayÃ¢â‚¬â„¢s pay.

While modern baseball has seem some rather memorable ejections, from a managerÃ‚Â using a rosin bag as a faux-handgrenade to throwing bases (beware: this has some pretty colorful language in it because it was filmed by a Cubs fan), early ejections were of a different character. For example, in 1896, a member of the Washington Senators, while sitting in the dugout, was ejected for loudly laughing at a strike call; Honus Wagner was throw at of a game for holding his nose at a call (even though he would later indicate he agreed with the umpire); in 1908 a member of the Giants was ejected for wearing rain boots to the batterÃ¢â‚¬â„¢s box in protest that the game was being played in such poor conditions.

Modern ejections, however, are generally believed to be managers attempting to Ã¢â‚¬Å“fire upÃ¢â‚¬Â their team. In 2014, however, baseball adopted an expansive replay system that grants managers one challenge per game with the possibility of gaining a second challenge should they win their first. The following rulings can be challenged (from Wikipedia):

This made me wonder: it seems that if a manager has a challenge then it would be strange to start yelling and get tossed from a game. So does the instant replay system cut down the number of ejections, or are managers merely finding new ways to get throw out of games? 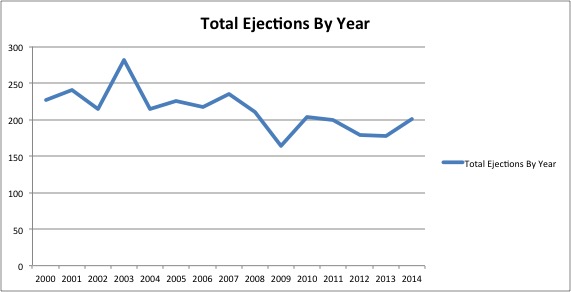 And here are the same data broken down by players, managers, and non-manager coaches (3B coach, bench coach, etc.):

Overall, fewer people are getting a half-day of work in MLB than in previous years but not by a large margin (last year there were 201 ejections, in 2000 there were 227). Despite roughly the same number of people getting the boot, the composition of these ejections has changed. In the early 2000s, players were getting tossed more frequently than managers by almost a 2:1 margin. Yet in 2007 that gap closed as both were thrown out 111 times. Since 2007Ã‚Â managers have taken-one-for-the-team and have been ejected more frequently than players. This, intuitively, speaks to the relative value of starting players compared toÃ‚Â managers when it comes to winning any individualÃ‚Â ballgame.

Since we are less than 1 year into the expanded instant reply system, it does not make sense to compare 2015 to previous full seasons. Thanks to fantasy umpire leagues (yes, they exist), I was able to uncover ejection data broken down by day from 2011-2015. Here are the ejection totals for the first half of each year, 2011-2015: 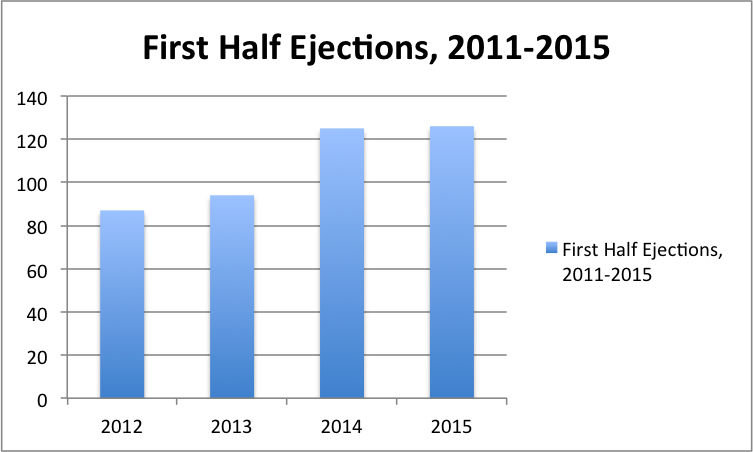 From these data, it does not appear that players or managers are less likely to get ejected due to the instant replay system. This is not entirely unexpected because many ejections are due to contested strike calls thatÃ‚Â are currently not reviewable under the replay system. Despite this, we still do not see a drop off in the number of ejections, lending some credibility to the argument that manager ejections are primarily driven by their attemptÃ‚Â to “fire up” their team.

Given there is very little evidence to support the argument that ejections have a positive impact on winning a game, it is strange that managers continue to do so. As instant reply expands in MLB, it will be interesting to see if this relationship holds or if managers cut down in their direct confrontation with umpires.