The Reds hot offense was slowed down by Mets rookie Noah Syndergaard. The Thor lookalike made it through eight innings for the first time in his big league career, and he allowed just one run in the process. Syndergaard didn’t walk a single batter, and struck out five. He only had 89 pitches when he left the game.

The Reds went down 1-0 in the first inning, after Mets leadoff hitter Curtis Granderson homered off Johnny Cueto. The Reds responded with a run in the second inning on a broken-bat ground out by Chris Dominguez. However, Cueto walked three batters in the fifth inning, including walking in the go-ahead run with the bases loaded. The Reds couldn’t push across another run, and fell 2-1 in the series opener in New York. 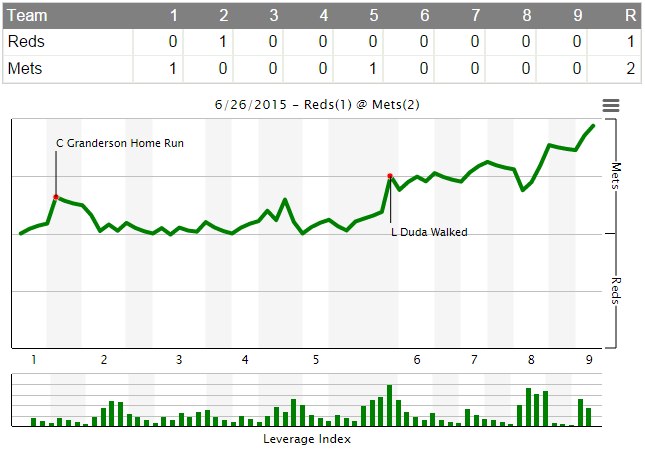 According to FangraphsÃ‚Â WPA statisticÃ‚Â (winning percentage added), the most important play of the game wasÃ‚Â Johnny Cueto walking Lucas Duda with the bases loaded in the 5th inning, giving the Mets a 2-1 lead.Ã‚Â That play decreased the Reds chances of winning by 15.7% (from 40.6% to 24.9%).

Players of the Game

Syndergaard capitalized on the Reds aggressiveness tonight. He got through the first inning on just 6 pitches, and only threw a total of 89 pitches in 8.0 innings. Syndergaard is just one of the Mets young studs in the rotation.

Johnny CuetoÃ‚Â only allowed 2 runs in 6 innings, but he did look a little shaky. Cueto walked three batters in the 5th inning, including walking in the go-ahead run. Cueto ran up his pitch count, as he threw 112 pitches in 6 innings. He did strike out 6, and only allowed 2 hits (although one of the hits went out of the park). Cueto probably didn’t enhance his trade value in this start, but he did give the Reds a good chance to win.

Jay BruceÃ‚Â now has a hit in each of his last 7 starts.

Joey Votto’sÃ‚Â 32-game on-base streak was snapped tonight. It was the longest active streak in the MLB. Votto went 0 for 4.

Eugenio SuarezÃ‚Â had a really bad error in the 4th inning. Cueto forced an easy ground ball to Suarez, which should have resulted in an inning ending double play. Cueto bailed Suarez out, and didn’t allow the Mets to score in the inning. Suarez already has 4 errors in 13 games. I really like Suarez, and he has a lot of upside, but he certainly has some room to improve on the defensive side. In 81 games with the Tigers last season, Suarez had -5 DRS. That is not as bad as you might think though. Jed Lowrie, Derek Jeter, Elvis Andrus, Jose Reyes, and Yunel Escobar all had more than -10 DRS last season.

Apparently,Ã‚Â Skip SchumakerÃ‚Â was the Reds best pinch-hit option in the 8th inning, with the Reds trailing by a run, with a runner on first base. Skip grounded out (should have been a double play, but the Mets 2B botched it). I’m not sure why Marlon Byrd wouldn’t be used there (he had the night off). Maybe Byrd was not available. Maybe.

The Reds saw a grand total of six (!) pitches in the first inning. Even more surprising was that Brandon Phillips saw four of them. Votto and Frazier went up hacking. Votto hit a lazy fly ball, and Frazier popped up to the first baseman. Votto entered the day leading the NL in pitches per PA (4.29), and Frazier is 34th (3.83). Phillips has the second worst pitches per PA (3.29) in the NL.

The most nervous moment of the night for Reds fans actually didn’t happen in New York tonight, but a few miles down I-95 in Philly. Max Scherzer, who threw a no-hitter in his last start against the Pirates, took a no-no into the sixth inning tonight against the Phillies.Ã‚Â Johnny Vander MeerÃ‚Â is the only pitcher in MLB history to throw back-to-back no-hitter, when he did so for the Reds in 1938. Whew.

Congrats to the USA women’s soccer team for advancing to the World Cup semifinals. I am sure many of you were flipping between that and tonight’s titanic struggle.

Brewers:Ã‚Â The Brewers are up 10-1 on the 39-33 Minnesota Twins in the 4th inning. Yes, you read that correctly. Parra, Ramirez, and Gennett have all homered for the Brewers.

Cardinals/Cubs:Ã‚Â 1-1 tie in the fifth inning. John Lackey and Jake Arrieta are locked in a tight pitchers duel. The game is on the MLB Network.

Pirates:Ã‚Â The Pirates are in a 2-2 tie with the Braves in the 9th inning. Francisco Liriano continued his success tonight, pitching 7.0 innings and allowing just 2 runs.