Hunter Greene finished off his 2022 season with his fifth consecutive brilliant performance. Greene dominated a hot Cubs team over six innings to end the Reds six-game losing streak. Donovan Solano lead the Reds offense with two hits, and the Reds bullpen allowed just one run over three innings to preserve the victory. 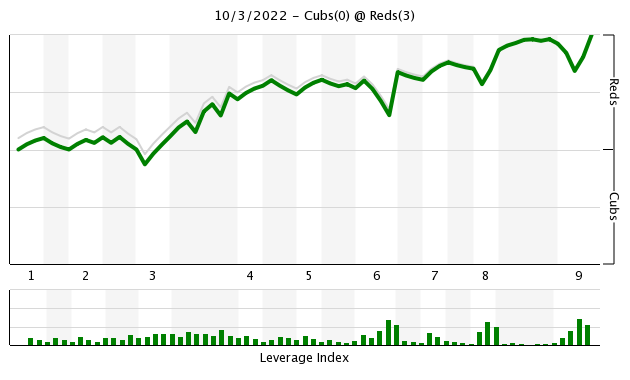 According to Fangraphs WPA statistic (winning percentage added), the biggest play of the game was Hunter Greene getting Seiya Suzuki to line into a double play with runners on 2nd and 3rd base, ending the inning 6th inning with the Reds leading 2-0. That play increased the Reds probability of winning by 18.8% (from 65.0% to 83.8%).

What an incredible finish to a rookie season for Hunter Greene. He struck out the side in the first inning, and dominated the Cubs over six innings. It didn’t even feel like Green broke a sweat tonight. Greene’s final line: 6.0 IP, 2 H, 0 R, 1 BB, 8 K. Hunter was absolutely dominate over his last 5 starts of the season. It’s pretty easy to be excited about Greene and Lodolo leading the Reds rotation for years to come.

Jose Barrero drew a walk and scored a run. The walk was off Cubs rookie starting pitching phenom, Hayden Wesneski, who entered today with just 2.0 BB/9.

T.J. Friedl had to leave the after appearing to injure his hamstring on an attempted steal of third base. It seems likely that his season is over with only 2 games left. Friedl opened some eyes this year with a very nice season, hitting .240/.314/.436 with a 101 wRC+.

Tonight will be final recap for Redleg Nation for 2022. Thanks to all those who have been following along since I started writing for RN all the way back in 2013. There will be better and brighter days ahead for our Cincinnati Reds. The future is bright with players like Elly De La Cruz, Noelvi Marte, Matt McLain, Christian Encarnacion-Strand, Brandon Williamson, Connor Phillips, Andrew Abbott and Chase Petty on their way to Cincinnati in the near future. Go Reds!