We need to talk about the trumpets.

Our own Chad Dotson shared the trumpets with his Twitter followers last month:

Baseball can be fun. https://t.co/N30NBoFwmF

And then I said:

The seats…
there are *people* in them

Even a college marching band in Ohio has adopted the trumpets as part of its 3rd quarter ritual:

“Ella Efer” was back at it this weekend! #GoBucks @TimmyTrumpet pic.twitter.com/yySS2XE0cz

The name of the song is “Narco,” which translates to “drug trafficker.” We don’t talk about that. Beside the point. This is A Thing.

What’s at issue with the trumpets, of course, is not the trumpets itself, but the importance of organic ceremonies in sport. They are unifying, uplifting, and uniquely identifying marks of a fandom. They mark the passage of time. There’s a reason why one fan of a certain age seeing another in a Mr. Reds Race shirt will exchange a nod of respect: We were there together in this particular moment of pixels. That shizz didn’t go down in Milwaukee or St. Louis or even Great American Ball Park. It happened right here, between you and me, in a building that no longer exists. A particular place in time and space. IYKYK.

But here’s the thing about the trumpets: This didn’t happen without a full stadium and a winning team. The Mets aren’t gliding on homebred rooters or nostalgia here. They’re not banning small plastic trumpets from the stadium. They’re providing it soil in which to flourish. They’re sticking them in the hands of their mascots and flying in the original artist from Australia. That’s why this thing is working. And spreading.

Baseball hinges upon these moments. They are what separate us from the sterile, the corporate, and the algorithm. The trumpets are natural, born of anticipation and running on an engine of moment. It doesn’t happen every night, and it will probably never happen again the second Edwin Diaz is traded. The trumpets won’t travel. 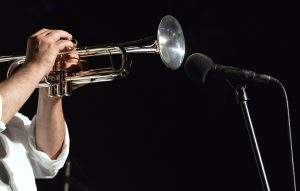 The trumpets are why I so despise recorded blasts from stadium loudspeakers, the Day-Os and the clapping. That’s bottom-down encouragement. It forces the issue. It’s the principal getting a TikTok account. Let us figure this out for ourselves.

Rally Squirrel, for example, was born not of a bunch of marketers sitting around a boardroom table with a flip chart.  Nobody brought it up in a Zoom meeting. It began with an actual squirrel who decided to run across a baseball field. The squirrel wasn’t on the payroll. It just showed up. That’s how it’s done.

The trumpets depend upon the tension of a late-inning game and confidence in a pro who’s going to get the job done. MLB has largely abandoned the fad of Ubering its relief pitchers out to the mound for a very good reason: The walk is part of the story. The bullpen has arrived and things are gonna get shifty and it just dosn’t have the same punch if he arrives via tugboat.

Some of my fondest Reds memories involve seeing Chapman stroll out the mound as everybody screamed: There were no trumpets, no Series run, no mascots, but playoff-like energy was boiling. I was at a Chapman appearance with a group of non-Cincinnatians once and jumped to my feet with the rest of the crowd: “Watch this guy,” I said, “this guy throws a hundred miles an hour.” His entrance was well-earned. The Reds won that night. I was proud of all of us.

Last Sunday, I went to Kroger’s during the Bengals game, partially on the supposition that I would find an almost-empty supermarket. I was wrong; with a record of 0-2 and a quarterback who spent more time gazing at the sky instead of his receivers, the people had already given up on the season, as a much-disappointed people will. The parking lot was full and they were out of plain bagels.

One guy was carrying his phone in the child seat of his cart, the radio call blasting. One woman called “Who Dey!” to another as they loaded groceries into their cars. “They’re winning!” she yelled back.

Winning does amazing things for founding and re-finding fan driven traditions. It is the best possible form of marketing and the only kind we’ll willingly perpetuate.