From September 28, 2019 through May 13, 2022 the Cincinnati Reds went 26-10 against the Pittsburgh Pirates. The Reds have now lost five straight games to the Pirates.

The game started out well for the Reds on Monday night. Chase Anderson pitched four scoreless innings, but there was a 40 minute rain delay. David Bell decided to pull Anderson after the first batter reached base in the fifth inning, with the Reds up 2-0. The floodgates opened up with the Reds playing some atrocious defense. The Pirates kept pouring it on, and despite only collecting one extra-base hit the entire night, a double, beat the Reds 8-3. 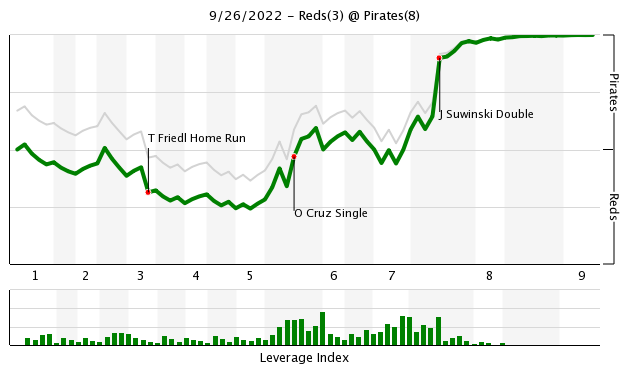 According to Fangraphs WPA statistic (winning percentage added), the biggest play of the game was Derek Law allowing a 2-RBI double to Jack Suwinski with 1 out in the 7th inning, giving the Pirates a 4-2 lead. That play decreased the Reds probability of winning by 25.5% (from 35.5% to 10.0%).

TJ Friedl hit his 8th home run of the year, and it was an absolute bomb (412 feet into the right-field seats). Friedl now has 16 home runs combined from AAA and MLB this season, and continues to show some decent power added to his game. Could this be a sign of things to come? Take a look at his home runs by year breakdown:

Jonathan India smoked a ball off the wall in the first inning. It was India’s first extra-base hit since September 9th (16 games). It was especially encouraging to see it coming against a quality RHP (Roansy Contreras). India entered play on Monday hitting .242/.308/.386 with an 89 wRC+ vs RHP this season.

Aristides Aquino hit a single at 113.6 mph in the 7th inning. That was his hardest hit ball of the year. He followed that up with a 405 foot home run in the 9th inning with the game out of reach.

The defense was just brutal tonight. No other way to say it. Hopefully some of the athletic prospects on the way can help remedy this, because the Reds defense has been really bad for three straight years.

Derek Law and Joel Kuhnel combined to give up 8 hits in 2 innings.

I am a big fan of Jeff Brantley, but I didn’t exactly agree with his comments tonight. He went on a fairly big rant in the 9th inning about how embarrassing for the players it would be to lose 100 games. Maybe that is the case in the clubhouse, I will never know, but from my perspective sitting at home, I don’t really see it. The Reds clearly did not do everything to try to win this season from the beginning, and then completely gave up on this season at the deadline (a decision that I agree with given where they were.). The final win-loss total does not matter much to me.