Graham Ashcraft and Connor Overton struggled in their returns to the mound for the Reds. In what turned out to be a piggy-back type start, the two pitchers combined to give up nine earned runs over seven innings. It got uglier for the Reds in the ninth inning, when position player Alejo Lopez gave up a bomb to Rowdy Tellz to make it a 10-2 ballgame. That would be the final score. 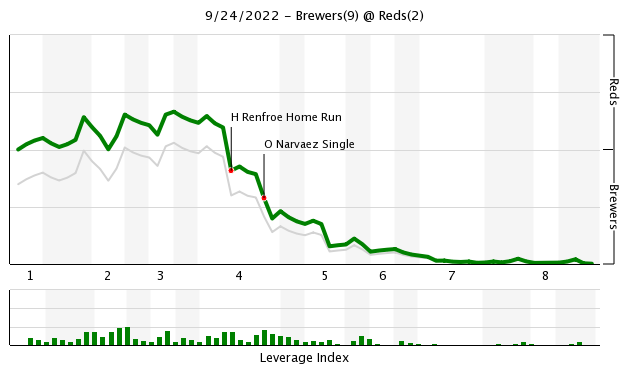 According to Fangraphs WPA statistic (winning percentage added), the biggest play of the game was Graham Ashcraft allowing a 2-run home run to Hunter Renfroe with 1 out in the 4th inning, giving the Brewers a 2-1 lead. That play decreased the Reds probability of winning by 18.8% (from 59.6% to 40.8%).

Stuart Fairchild had a hit and a walk against Corbin Burnes. Fairchild continues to make the most of his opportunities. He his hitting .286/.375/.543 on the season.

Matt Reynolds also had a hit and a walk against Corbin Burnes. Reynolds’ hit in the 7th inning drove in a run and chased Burnes from the game.

Aristides Aquino ended a streak of 0-for-24 at the plate with an infield single in the 7th inning.

Joel Kuhnel pitched a perfect inning with a strikeout.

Graham Ashcraft started out strong in his first start in over a month. Ashcraft retired the Brewers in order and threw 9 of his 13 pitches in the first inning over 100 MPH, topping out at 101.3. Ashcraft got double-plays to get out of both the 2nd and 3rd inning, but it all fell apart in the 4th inning. Ashcraft allowed 5 hits and hit a batter in the 4th. His final line on the day: 4.0 IP, 8 H, 4 R, 0 BB, 2 K, 1 HR.

Connor Overton didn’t give up a ton of super hard contact, but struggled through 3.0 innings in relief of Ashcraft. The big blow to Overton was a pretty cheap 360 ft. home run with an expected batting average of .070. It was Overton’s first appearance since May 17th, so it would probably not be wise to make much out of it. Overton’s velocity was just a tick down from his normal speed. Overton’s final line: 3.0 IP, 4 H, 5 R, 3 BB, 1 K, 1 HR. The home run allowed was first one for Overton in 27.2 innings this season.