Hunter Greene was absolutely electric in his return to the Reds rotation. He shut down the Cardinals down for six innings, striking out eleven batters without allowing a walk. Greene broke his own records of most pitches 100+ MPH, and most strikeouts on pitches 100+ MPH.

Unfortunately for the Reds, Jose Quintana was dominant on the mound for the Cardinals as well. He threw seven shutout innings, and the Reds had just two hits off him. It did not get better for the Reds offense against the Cardinals bullpen either.

Reiver Sanmartin, Buck Farmer and Alexis Diaz got the Reds to extra-innings in a 0-0 game. Things got dicey for the Reds in the bottom of 10th inning after they failed to score in the top of the inning. The Cardinals had the bases loaded with just one out against Alexis Diaz in his second inning of work. TJ Friedl make a nice catch on a shallow fly ball, avoiding a collision with Jose Barrero, and proceeded to throw out Corey Dickerson at the plate making a poor decision to try to score the winning run.

The Reds again failed to score in the top of the 11th inning. The Reds would score just one run over 20 innings of baseball on Saturday.

Fernando Cruz, the starting pitcher for the Reds yesterday, came in for the bottom of the 11th. He did not retire a batter, and the Reds lost on a walk-off, fielders choice. Paul Goldschmidt hit a ball to Nick Senzel, who was playing the third base line as the fifth infielder in the do-or-die situation. Senzel tried to throw out the winning run, but the ball hit the runner Andrew Knizner on his throw home. Reds broadcaster Chris Welsh broke down the play eloquently, stating that while Knizner DID deliberately make the throw home difficult for Senzel, that was a legal play because he DID NOT throw his body into the throw as it happened.

The Reds were swept in the double-header today in St. Louis after losing the first game 5-1. The Reds have now lost three straight games. The Reds need to go 6-10 over their final 16 games to avoid 100 losses. 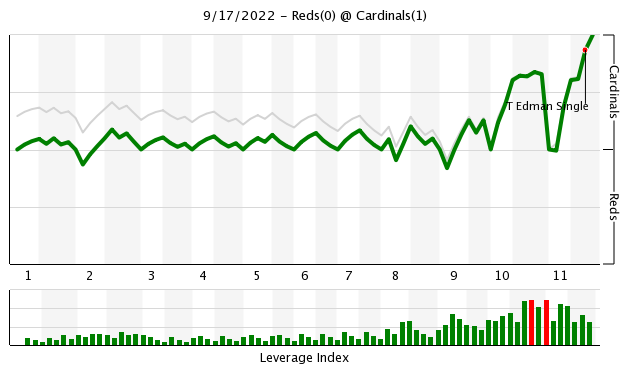 According to Fangraphs WPA statistic (winning percentage added), the biggest play of the game was Fernando Cruz allowing a bunt single to Tommy Edman, to load the bases with 0 outs in the bottom of the 11th inning. That play decreased the Reds probability of winning by 12.7% (from 19.2% to 6.5%).

Hunter Greene was incredible in his first start since August 1st: 6.0 IP, 4 H, 0 R, 0 BB, 11 K. He destroyed his own previous velocity records as documented by the great Sarah Langs:

Reiver Sanmartin retired all four batters that he faced with 3 strikeouts – including a strikeout of pinch-hitter Albert Pujols after a roaring ovation from the Busch Stadium crowd. Sanmartin now has a 2.76 ERA this year as a relief pitcher.

Stuart Fairchild had the hardest hit ball of the night from either side – 107.1 MPH EV double in the 7th inning off the dominant Jose Quintana.

The Reds scored just 1 run in 20 innings today. Aristides Aquino came into today scorching hot, but was 0 for 8 on the day. Kyle Farmer was also 0 for 8, and Nick Senzel was 0 for 7 with a walk.

It has been so refreshing to see three starting pitchers that were drafted and developed by the Reds have the kind of success that Lodolo, Greene and Ashcraft have had this season. Just the fact that none of the three have needed to be sent back down to AAA this year is remarkable. How many big pitching prospects have we seen in recent memory get called up and have to go back down to work on stuff? These three young arms are a pretty good foundation to build a team around.

In their last 3 starts, rookies Lodolo and Greene have combined for 0 walks and 33 strikeouts.

Here is Chris Welsh and his team over at Baseball Rules Academy explaining the final play of the game.

Here is the base path throwing lane rule explained. With Paul Goldschmidt showing how to do it. https://t.co/BOjZ0iJQOm