The Reds got off to a 4-1 lead in the top of the 5th, but that was short-lived. Albert Pujols hit career home run #698 in the bottom of the 6th inning to tie the game at 4.

The Reds would take the lead back in the top of the 7th on a Kyle Farmer solo home run, but the Cardinals scored two runs right back in the bottom of the 7th on a poorly hit double from Nolan Arenado. That would prove to be the final score in a 6-5 defeat for the Reds. 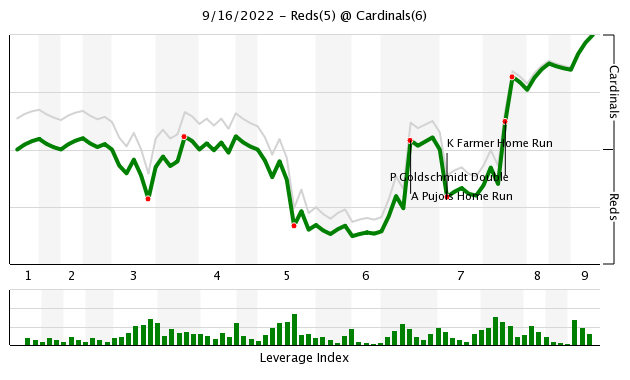 According to Fangraphs WPA statistic (winning percentage added), the biggest play of the game was Raynel Espinal allowing a 2-run home run to Albert Pujols with 1 out in the 6th inning, tying the game at 4 . That play decreased the Reds probability of winning by 29.6% (from 75.7% to 46.0%).

Fernando Cruz made his second start of the week as an opener, and he was very impressive. Cruz struck out the side in the first inning (Donovan, Edman, Goldschmidt). He then retired the first two batters in the second inning. Cruz got ahead of Albert Pujols 0-2, but he barley plunked him with a breaking ball. David Bell pulled Cruz after that hit-by-pitch with 24 pitches on the night.

Kyle Farmer hit his (active) team leading 12th home run in the 7th inning to put the Reds up 5-4.

Aristides Aquino just keeps on his hot streak. He was 2-4 with a double. Aquino now has 11 extra-base hits in 49 at-bats in September. Aquino also had his 12th assist of the season – tying the most among outfielders in MLB. Aquino has only played in 68 games this season.

Nick Senzel had a 2-hit game, with a walk and RBI.

42-year old Albert Pujols having a 141 wRC+ after having five consecutive seasons below 90 is the ultimate #CardinalsDevilMagic.