The New York Mets just continue to roll, with their latest victims being the Cincinnati Reds. The Mets have now won 14 of their last 16 games. The Reds suffered their first series loss of the second half. They will try to salvage a game in the series finale tomorrow afternoon at 1:10 PM. 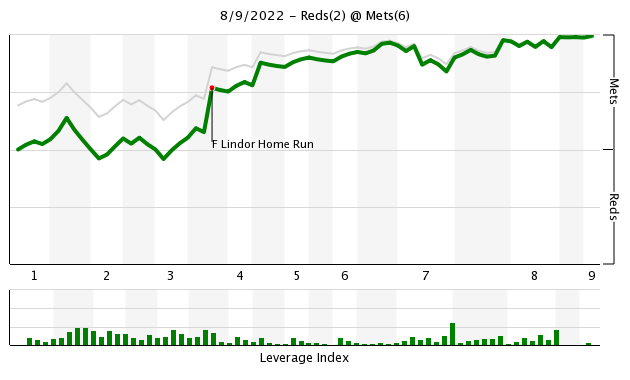 According to Fangraphs WPA statistic (winning percentage added), the biggest play of the game was Mike Minor allowing a 2-run home run to Francisco Lindor with 1 out in the 3rd inning, giving the Mets a 2-0 lead. That play decreased the Reds probability of winning by 19.3% (from 42.4% to 23.1%).

Jake Fraley continues to impress since returning from the IL. He his a 439 ft home run off Carlos Carrasco. Fraley entered today hitting .421/.450/.579 since returning on 7/30.

Donovan Solano just keeps on hitting. He had another 2-hit night and reached base another time with a walk.

The Reds offense is really not doing poor Mike Minor any favors. The Reds have now scored a whopping 31 runs in his 12 starts. That is just 2.6 runs per start.

David Bell made a very puzzling move in the top of the 8th inning when he pinch-hit Alejo Lopez for Jose Barrero with the bases loaded. The Reds were down 4 runs with 2 outs. Put aside the fact that this is a lost season where most of what you are doing should be about the future, and you’d think that one would want to show confidence in Barrero – Alejo Lopez has a whopping 2 extra-base hits in 84 big league at-bats (both doubles) and the catcher Austin Romine was on-deck.