Justin Dunn allowed a two-run home run to the second batter he faced, making his first start in 14 months in the big leagues. Dunn was able to settle in after the home run, and work through 4.2 innings on a strict pitch count limit.

The Reds offense was able to get base-runners off the Mets, and their quality starting pitcher Chris Bassitt, but they could not find a way to get them across the plate. Even worse, the Reds lost both Jonathan India and Mike Moustakas to injuries in the fourth inning. That was coming on a night that Kyle Farmer was scratched from the lineup before the game due to neck stiffness.

Former Red, Tyler Naquin put the game away in the bottom of the 8th with a two-RBI triple to put the Mets up 5-1. 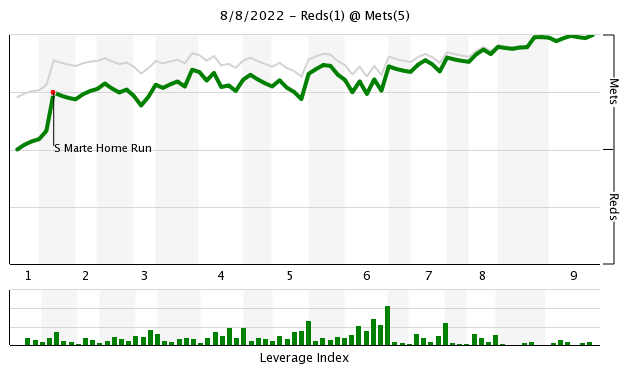 According to Fangraphs WPA statistic (winning percentage added), the biggest play of the game was Justin Dunn allowing a 2-run home run to Starling Marte with 0 outs in the 1st inning, giving the Mets a 2-0 lead. That play decreased the Reds probability of winning by 16.8% (from 41.9% to 25.1%).

Justin Dunn had a solid Reds debut. The final line was nothing to be ecstatic about (4.2 IP, 5 H, 3 ER, 2 BB, 2 K), but for a guy who hadn’t made a big league start in over 14 months with a long recovery, it was a good start. Dunn’s biggest issue at AAA was his command (5.54 BB/9). Dunn only walked 2 batters against a very good Mets lineup. That had to be encouraging to both Dunn and the Reds. Dunn was also much better with his pitch efficiency, only throwing 70 pitches. That was much more efficient than he was at AAA – for example he threw 91 pitches to get through 5.0 innings in his final start.

Ian Gibaut had another really quality relief appearance, retiring all 4 batters he faced with 2 strikeouts. He has been dominant over his last 6 appearances: 7.1 IP, 4 H, 0 R, 1 BB, 12 K.

Jake Fraley and Jose Barrero each had 2 hits on the night. Fraley had the hardest hit ball of the night for the Reds, a 105.7 EV single in the 8th.

Albert Almora Jr. made an incredible catch to rob a home run.

Both Jonathan India and Mike Moustakas left the game with injuries.

Nick Senzel was forced to third base after the India and Moustakas injuries, plus Farmer being unavailable. I would really like to see Senzel become a super utility player. It seems like it would give him a much better chance of sticking long-term as a big leaguer.