The Reds trailed 3-0 going into the bottom of the 8th inning. Their win probability was down to 3.3% at one point in the top of the 8th inning. The Reds got on the board with a Nick Senzel bases loaded walk, but Jonathan India hit a weak pop up for the second out of the inning. Brandon Drury picked up India with his fourth hit of the game, which tied the game at 3.

The game went into extra innings. The Rays were able to get their ghost runner to score, but Jeff Hoffman limited them to just that. Matt Reynolds leadoff with a single in the top of the 10th. The Reds tied the game on a wild pitch, then Donovan Solano singled to put runner on the corners with no outs. That set the stage for the hottest hitter on the Reds, Nick Senzel. He delivered his first career walkoff hit to give the Reds their fourth walkoff win since Sunday. The Reds have clinched their first series win at home since the end of May. 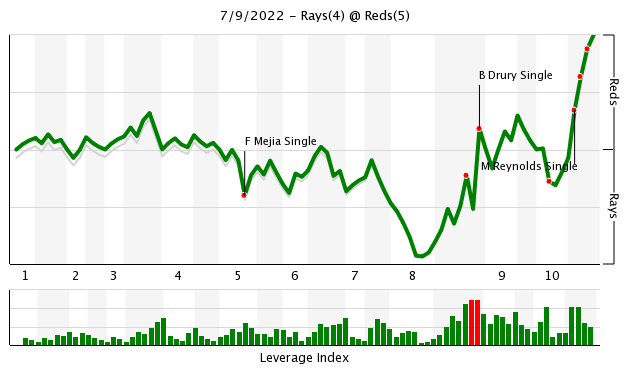 According to Fangraphs WPA statistic (winning percentage added), the biggest play of the game was Brandon Drury’s 2-RBI single with 2 outs in the 8th inning, tying the game at 3. That play increased the Reds probability of winning by 35.1% (from 24.1% to 59.2%).

Hunter Greene was brilliant. I’ll just give you the line and let you drool over the stats from Reds TV statistician, Joel Luckhaupt: 6.0 IP, 3 H, 1 R, 4 BB, 9 K

Brandon Drury just keeps on keeping on. He had 4 hits, including a pair of doubles, and a game-tying 2-RBI single in the 8th inning.

Nick Senzel had another great day to continue his hot stretch, with 2 hits and a bases-loaded walk. Senzel entered today hitting .420/.463/.580 since June 23rd.

Tyler Stephenson had 2 hits in his return to the Reds lineup.

Buck Farmer pitched a perfect 7th inning in his return to the Reds, striking out 1 batter.

Matt Reynolds came off the bench. He nearly hit a 3-run home run, but had a key single to lead off the 10th inning to put the Reds in a golden spot.

Mike Moustakas was 0 for 3 with 3 strikeouts, before being lifted for a pinch hitter against a left-handed reliever. Moustakas also had a rough game in the field, filling in a first base for Votto. He failed to cover first base on a ball hit to India in the Rays 2-run, 8th inning.

Tommy Pham had the golden sombrero, going 0 for 4 with 4 strikeouts.

Ian Gibaut had a rough second outing with the Reds as he walked two batters, leading to 2 runs scored after some shaky defense.

I would love to see Jonathan India, Nick Senzel, and Tyler Stephenson bat 1-3 at the top of the order after the trade deadline. These three guys are clearly the big three the Reds are hoping to be their core going forward. It would be nice to say to those guys, “this is your team going forward,” and then let set the tone.