It has been a trying season for the Cincinnati Reds – especially for the Reds bullpen. When it was announced that it would be a bullpen game for the Reds in the second game of today’s double-header, there was certainly not a lot of confidence inspired. However, the Reds bullpen answered the call in a big way.

Jeff Hoffman, Ross Detwiler, Robert Dugger and Reiver Sanmartin combined to allow just 1 run on 5 hits over 9 innings. They struck out 12 batters while only walking 2.

Despite the great effort in the bullpen start, the Reds still trailed 1-0 in the 6th inning. Tyler Naquin hit a solo home run to tie the game in the 6th. Jonathan India’s 2-out RBI single in the 7th put the Reds ahead to stay. 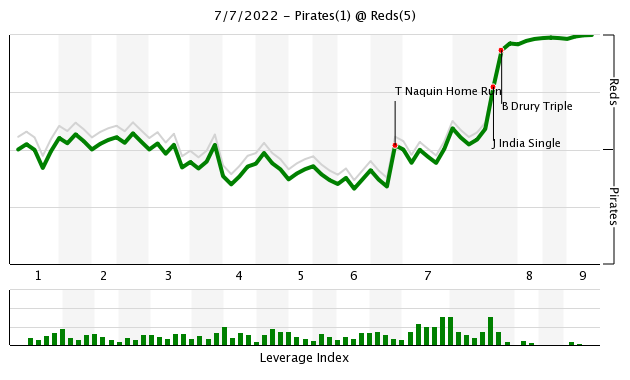 According to Fangraphs WPA statistic (winning percentage added), the biggest play of the game was Jonathan India’s RBI single with 2 outs in the 7th inning to give the Reds a 2-1 lead (runners on 1st & 2nd). That play increased the Reds probability of winning by 18.4% (from 59.0% to 77.3%).

Jonathan India had 2 hits tonight, including the go-ahead single in the 7th inning. India had 4 hits total for the double-header. Let’s hope this is the start of a big turnaround in the sophomore season for India.

111.3 mph exit velocity on that RBI single from India. His hardest-hit ball as a major-leaguer.

Tyler Naquin hit his first home run since May 24th to tie the game in the 6th inning.

He was used an opener today, but Jeff Hoffman made his first start for the Reds since July 21, 2021. Hoffman did a great job getting the Reds through 1.2 scoreless innings with 3 strikeouts and 0 walks to get the game started.

Robert Dugger gave the Reds 3.2 very strong innings as the “bulk reliever” today. Dugger struck out 5 batters over 3.2 scoreless innings. Dugger had a 5.63 ERA and only struck out 6.75 batters per 9 innings at AAA this season. Baseball is a funny game.

Brandon Drury had another multi-hit game. He had a 2-RBI triple in the 7th inning.

Mike Moustakas hit the ball hard today. He only had 1 hit to show for it tonight, a double.

The Reds did play some more shaky defense tonight, but whatever.

Switch-hitting infielder Elly De La Cruz in this doubleheader:
A: Hit home runs from both sides of the plate in the first game, a baseball rarity.
B: Has hit another homer in the second game.