Everything pointed towards a win for Cincinnati as they entered the 9th inning holding a 3-2 lead, but then the Mets tied the game up and dropped a 5-run 10th inning as the Reds bullpen blew yet another game. New York’s win gave them a series win and dropped Cincinnati to 28-53 on the season.

Jonathan India was hit by a slider on the ankle to start the bottom of the 1st inning. He would stay in the game and run the bases, but he would be stranded. He didn’t come to the plate the next time he was due up, being replaced at designated hitter by Mike Moustakas in the 2nd inning.

The Reds were trailing 1-0 entering the 2nd inning, but Matt Reynolds drew a 1-out walk and Nick Senzel took the first pitch he saw and crushed it eight rows deep into the seats in left field to put the Reds ahead 2-1. Cincinnati added to their lead an inning later when Brandon Drury led off with a single and stole second base before scoring on a ground-rule double down the right field line by Kyle Farmer.

In the 4th inning Nick Senzel and Albert Almora Jr. walked to start the inning, but Senzel was picked off by the catcher for the first out of the inning. Michael Papierski walked to put two men back on base, but back-to-back strikeouts ended the inning in what would represent the last big opportunity for the Reds to score before extra innings.

The 10th inning would be anti-climactic for the Reds offense after the Mets scored five runs in their half to take an 8-3 lead. Cincinnati went 1-2-3, dropping the game and the series.

Graham Ashcraft hit Brandon Nimmo to lead off the game. He would move to third base on a ball that took a bad hop on Matt Reynolds and score when Jeff McNeil grounded a single into right field to put the Mets up 1-0.

After the Reds took a 3-1 lead over the next two innings, New York got back on the board in the 4th. Dominic Smith doubled to lead off the inning and he scored on a 2-out single by Tomas Nido. Brandon Nimmo followed with a single of his own to put two men on, but Ashcraft induced a ground out to end the inning. That was the last time that the Mets scored against the big righty, who exited the game after the 6th inning with a 3-2 lead.

Joel Kuhnel got the first two outs of the 7th inning before Pete Alonso singled. That brought Reiver Sanmartin into the game to face Jeff McNeil and he got a ground out to end the inning. Sanmartin returned to fire a perfect 8th inning.

Hunter Strickland came out for the 9th to try and pick up the save. He couldn’t get the job done, giving up a single to Brandon Nimmo and then a game-tying RBI double to Starling Marte before getting a ground out and a pop up to end the inning and send it to the bottom of the 9th all tied up.

Cincinnati didn’t score in their half of the 9th inning, so the game headed to extras. Dauri Moreta came on to begin the frame and got Jeff McNeil to fly out to begin the inning but then saw Dominic Smith double in Ender Inciarte who began the inning on second base as the Mets took a 4-3 lead. Eduardo Escobar hit a lazy fly ball into right field for the second out. The Reds then opted to intentionally walk Luis Guillorme to bring James McCann to the plate and the move didn’t work as McCann singled into right field and Tommy Pham’s throw was a bit off of the plate and saw Smith slide in safely, with McCann taking second base on the throw home. Brandon Nimmo followed up with a 3-run homer to make it 8-3. The end.

At 28-53 if you watched the game to the end I have to imagine this is a self portrait. 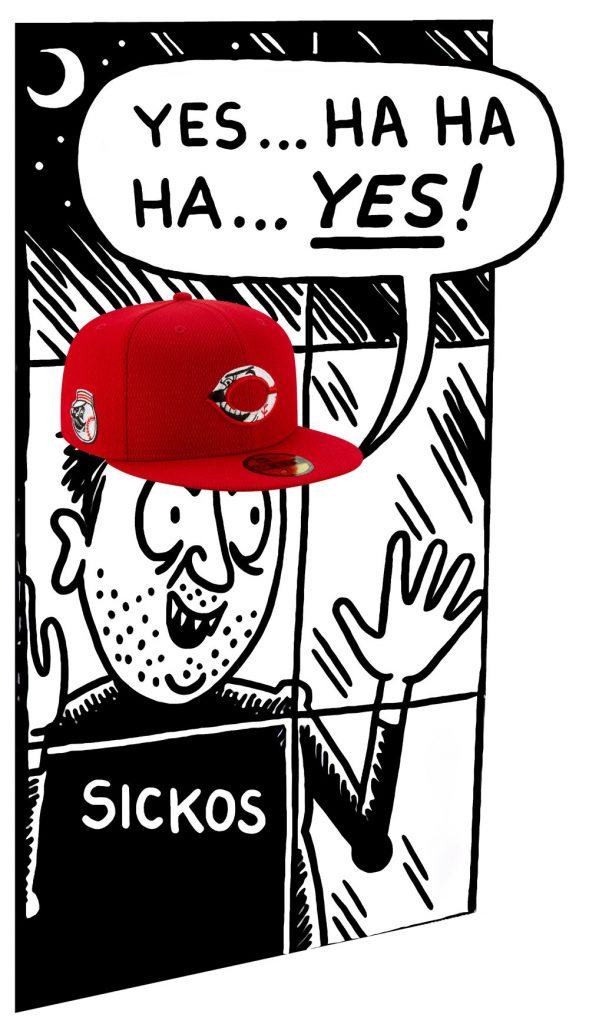