The Reds started off their road trip with an impressive series victory in San Francisco. They won the first game in Chicago against the Cubs on Tuesday, but they had to settle with a .500 road trip after losing the final two games at Wrigley Field.

Graham Ashcraft struggled tonight for the Reds, but his defense did him no favors behind him. Ashcraft could not make it out of the third inning, finishing the night with 7 earned runs allowed. The bright spot for the Reds on this evening was Joey Votto hitting his furthest home run of the season in the 6th inning.

The Reds bullpen outside of Reiver Sanmartin struggled yet again, and the Reds brought in Max Schrock to pitch in the 8th to really let the floodgates open at Wrigley. 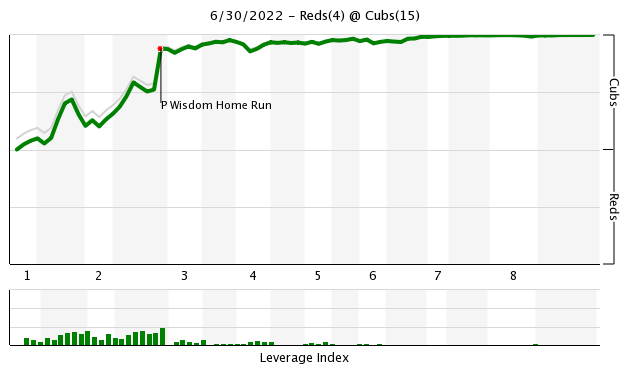 According to Fangraphs WPA statistic (winning percentage added), the biggest play of the game was Graham Ashcraft allowing a 3-run home run to Patrick Wisdom with 2 outs in the 2nd inning, giving the Reds a 5-0 lead. That play decreased the Reds probability of winning by 17.9% (from 23.8% to 5.9%).

Joey Votto hit his furthest ball of the season, a 418 foot blast of Kyle Hendricks. Votto’s previous high was 403 feet against Zac Gallen. It was also his second hardest hit ball of the season at 109.0 EV (his furthest was 111.9 EV against Walker Buehler). Votto has 5 extra-base hits over the last 3 games, so hopefully this is the start of a really good stretch for him.

Reiver Sanmartin pitched 2.2 scoreless innings, including getting a double play to get out of Ashcraft’s jam in the third inning. Sanmartin continues to pitch well in the bullpen – as a reliever this year, he now has a 1.48 ERA in 12.2 innings (3 BB, 9 K).

Mike Papierski had 2 hits in his first start with the Reds (he is the Reds new backup to the backup catcher in case you didn’t know).

Tommy Pham had a 3 hit night, including a 3-run home run in the 9th inning to make the final score a little more respectable.

Graham Ashcraft had a rough night at Wrigley. He wasn’t as bad as his final line score (2.2 IP, 7 H, 7 ER, 2 BB, 1 K, 1 HR) might indicate, as he did give up some fairly weak hits and his defense did not help him. Ashcraft’s next start should come against the Pirates, so hopefully he can get back to his previous dominance.

Dauri Moreta and Ross Detwiler each got hit hard. The Reds just have so many relievers right now that really have no business being at this level.

Brandon Drury and Nick Senzel each had their modest hit streaks snapped. Drury’s streak was at 8 games, while Senzel’s was at 6 games.