We are now in a position in which Tom Cruise is standing for all that is normal and customary in America.

Rather than asking you to let that sink in for a moment, I’ll simply relate that as Josh The Pilot and his tactical kilt and I walked past Great American Ball Park en route to a viewing of Maverick. I noted the empty seats that were visible from the river. Alllllllllllllll the empty seats. There were probably more people in the theatre than there were in this fine ballpark to see live Major League Baseball– over a month after this film’s release. We passed on by to watch a movie we’d already seen. (Josh The Pilot wanted to watch it in IMAX, and also to give the kilt the opportunity to render its opinion.) 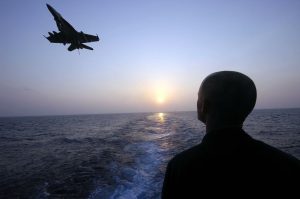 Like the Reds, this film, (which, unlike the Reds, has garnered one billion dollars in receipts and counting in a single month), had every possible thing pushing against it. One of its two original co-stars could speak only with a voice box. The other, once a household name for his easy charisma, was now synonymous with the weirdest of Hollywood weirdness. It languished in development hell, then moldered in the can thanks to COVID-19. When Maverick did finally bow, it was to a vastly changed world, one fully enamored with streaming and almost fully fed up with Hollywood.

And yet, at the screening we attended, almost no one laughed at the film’s occasional jokes. Why? Because they’d seen and heard them before. These were all re-watchers: Full-price weeknight ticket, butts in filthy seats, popcorn in hand.

It’s surprising for a man who makes a living by faking people, stories, and things, but Cruise insisted on authenticity for Maverick. This was to be no two-hour Lucas cartoon show. The cast really climbed into jet fighters, they really experienced extreme g-forces, and they really threw up a lot. And it shows.

And none of it was necessary. Maverick would have probably done well–not billion dollar well, but well–by coasting on nostalgia alone. People who enjoyed Top Gun were sure to enjoy its sequel, because common economic sense dictates that it will be exactly the same movie. Which is fine, if you don’t like a lot of Jerry Lee Lewis variation in your bar-singing scenes. But Cruise wasn’t willing to settle for fan service alone.

The script endured multiple forms, but Cruise insisted on involving his Top Gun co-star, Val Kilmer. After the two portrayed equal and opposite ego reactions in the first film, their careers took decidedly different trajectories. Kilmer stole the world and everything on it as Doc Holliday in Tombstone, but then out-weirded Cruise and vanished. He shocked fans with his nearly unrecognizable appearance in the recent documentary Val, his flexible voice destroyed by throat cancer and his chiseled profile gone with cassette tapes and phone booths. It would have been easy to write Iceman out, kill him off early, or for Maverick to conduct his conversations with the admiral solely by text.

Instead, Kilmer was brought on set, given lines with a respectful write-around, and a role that has actual bearing in the film’s plot. His scene was believable, relatable, and, most importantly, human. In this fashion, Maverick paid proper homage to Kilmer’s specific role in what made Top Gun a cultural touchstone without inhabiting it in a dishonest or unhealthy way.

Then, when the premiere of Maverick was set and delayed, set and delayed, Cruise resisted pressure to stream it. No, his real airplanes would appear in real theaters. It looks like a genius move now as he rakes in accolades and revenue, but in May of 2020, this was an eyebrow-raiser. How out of touch; how arrogant. Who did this tabloid-fodder punchline think he was?

But Tom Cruise knew what he was sitting on with Maverick. He knew it was the work of decades and thousands of talented people, of love for craft and high ideals. He held out. He refused to follow a trend just because there was a trend– for that trend was self-destructive, and, most importantly, didn’t make sense for his movie.

Maybe this is just a natural cycle of celebrity, in the way that people are now unironically going to Nickleback concerts; there’s only so bizarre you can go before looping right back around to normal. Or maybe Tom Cruise has discerned that what we all need right now are some guitar solos and a triumphant carrier landing. Maybe he remembered what it felt like to drink from a garden hose and play a video game standing up.

But maybe the most vital lesson baseball, and this front office in particular, can take from Maverick is Cruise’s pre-film greeting, in which he delivered his gratitude to the audience for spending their money and handing over their time to this movie.

Special thanks to Josh The PIlot for his invaluable assistance to this post, in which I held up a laptop screen full of airplane stock photos and said, “Point to Maverick’s.”