Luis Castillo shut down the Cubs for six innings at Wrigley Field on Tuesday evening. Castillo did not allow a run and struck out 11 batters. The Reds offense was lead by Jonathan India, who hit a three-run home run in the top of the sixth inning to put the Reds up 5-0. The Reds bullpen, as they often do, made things interesting, but they were able to hang for the victory. Cincinnati has now won three of their last four games. 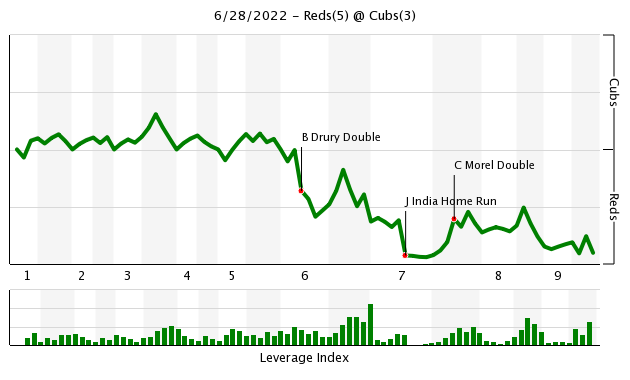 According to Fangraphs WPA statistic (winning percentage added), the biggest play of the game was Brandon Drury’s RBI double with 1 out in the 6th inning, giving the Reds a 1-0 lead. That play increased the Reds probability of winning by 17.8% (from 50.3% to 68.1%).

Luis Castillo was sensational on Tuesday evening. We are likely about to enter the final month of Castillo in a Reds uniform, and he gave a vintage performance. His final line: 6.0 IP, 4 H, 0 R, 3 BB, 11 K. (more on his pitch count below)

Jonathan India hit his second home run of the season. After not hitting his first home run until game #67 of the season, India has 2 bombs in his last 6 games. Hopefully this is the start of a summer full of long balls for the 2021 NL Rookie of the Year.

Brandon Drury just keeps on raking. He had two hits and walk, including a RBI double to put the Reds up 1-0. Drury now has an .867 OPS on the season.

Donovan Solano continues to make me incredible sad that he was injured the first 2+ months of the season. Solano had a pair of doubles to continues his strong start.

Aramis Garcia had a 3-hit day for the first time since 2018.

Art Warren and Hunter Strickland each pitched scoreless innings of relief. Strickland is now remarkably has 4/4 in save chances for the Reds this season.

Joel Kuhnel gave up 3 earned runs in the 7th inning to allow the Cubs to get back in the game after the Reds had a took a 5-0 lead in the top of the inning.

David Bell elected to leave Luis Castillo in the game at the start of the 6th inning at 93 pitches. Castillo ran into some trouble, but worked his way out. He ended up with a career high 123 pitches. I’m sure this will be highly controversial, but I really don’t understand Luis Castillo setting a new career high in pitches a few weeks away from the Reds almost assuredly looking to trade him. I understand that pitch counts are an arbitrary number, but I also don’t understand with the stage the Reds are at that it was a good idea for Castillo to throw the most pitches of his  big league career tonight (a career of now 133 starts). Like it or not, the Reds are placing a fairly large stake in their future on the return of Castillo in a few weeks. I would be doing absolutely everything possible to make sure that I’m doing all that I can to keep him healthy.