The struggles for Mike Minor with the Cincinnati Reds continued on Saturday night in San Francisco. Minor allowed three home runs in the pitcher friendly Oracle Park – in route to a 9-2 loss to the Giants.

The Reds took an early 1-0 lead on a Nick Senzel RBI single, but the Giants scored 9 unanswered runs. Brandon Drury hit his 15th home run of the year late in the game for the Reds. 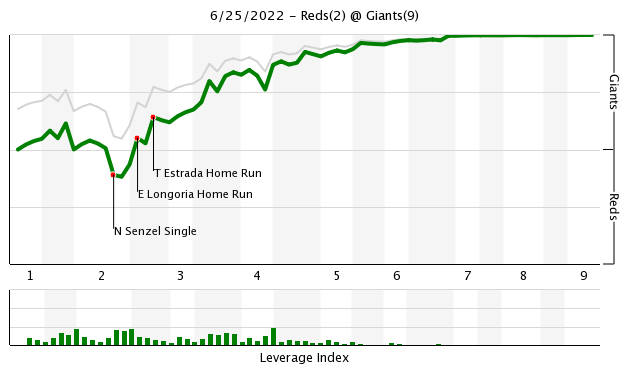 According to Fangraphs WPA statistic (winning percentage added), the biggest play of the game for the Reds was Nick Senzel‘s RBI single 2nd inning with 2 outs, giving the Reds a 1-0 lead with runners on 1st & 3rd. That play increased the Reds probability of winning by 11.5% (from 49.4% to 61.1%).

Brandon Drury hit his 15th home run of the season.

Mike Moustakas reached base twice for a second consecutive night.

Nick Senzel drove in a run. He is 5 for 11 over the last three games. We have said this many times before, but hopefully this is the start of a really nice stretch from Senzel.

Mike Minor‘s first 5 starts with the Reds have been rough as he now has a 7.71 ERA/7.95 FIP. He has allowed 10 home runs in 25.2 innings. I suppose the positive for Minor is that he has at least gone 6.0, 6.1 and 5.0 innings in his last 3 starts. Minor was brought in to eat innings for the Reds. You just hope that he could mix in a few starts where the Reds actually have a chance of winning.

Jared Solomon had a rough inning his his first appearance since being recalled, allowing 3 earned runs and 2 walks.

Jonathan India was hit by a pitch in the 5th inning. He stayed in the game until the 7th inning when David Bell took India out along with Pham and Votto due to the game being out of hand. Hopefully that was just precautionary.

No fracture. X-rays were negative.