The Cincinnati Reds entered play on Friday having lost seven straight games, but Graham Ashcraft held the Giants in check through a career high eight innings to stop the Reds skid. Ashcraft kept the Giants hitters off-balance all night.

The Reds got the scoring going in the top of the second on back-to-back RBI hits from Mike Moustakas and Nick Senzel. Another RBI single from Senzel in the 6th inning pushed the Reds lead to 4-1.

The Giants would get a run back in the 8th inning, but Ashcraft was able to get out of the inning with a 4-2 lead. Hunter Strickland finished off the Giants in the 9th inning. 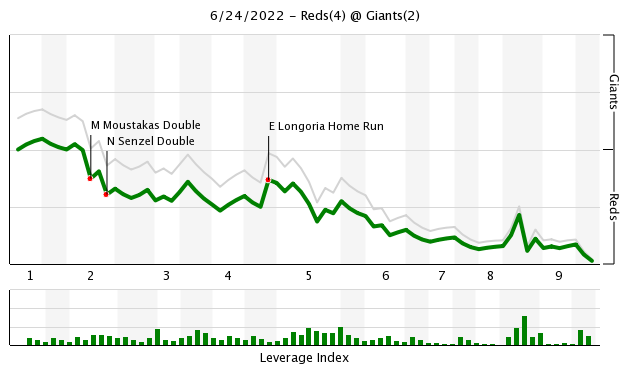 According to Fangraphs WPA statistic (winning percentage added), the biggest play of the game was Graham Ashcraft getting Tommy La Stella to ground into a double play with 0 outs in the 8th inning, runner moved to 3rd base, Reds lead 4-1. That play increased the Reds probability of winning by 15.7% (from 78.6% to 94.3%).

Graham Ashcraft was simply sensational. His final line on the night: 8.0 IP, 5 H, 2 R, 0 BB, 8 K. It is just remarkable that a pitcher making his 7th big league start can get through 8.0 innings without allowing a walk. He kept the Giants hitters off-balance all night. The Giants finished with a .189 xBA (expected batting average according to Statcast) off Ashcraft.

Looking at @Retrosheet data, Nick Senzel became the 18th player to reach on catcher interference at least 12 times in his career. He did it in his 207th career game. The next fewest games to reach a dozen was Dale Berra in his 449th career game.

Mike Moustakas had a 2-hit night and drove in a run.

The Reds have gone 4 consecutive games without an error (although, India make a pretty poor play…….see below).

Jonathan India misplayed a very routine ball in the 3rd inning. Thankfully, Farmer bailed him out with a great recovery to get the force out at second base, and then Ashcraft was able to sneak out of the inning. India entered play with -12 career outs above average. India’s defense at second base is starting to become a bit of a concern.

Nick Senzel was thrown out trying to sneak a run across in the 2nd inning, but I absolutely loved the effort from Senzel on the play. Senzel would use his hustle later in the game to steal a run on an error from Brandon Crawford.