Tyler Mahle threw nine shutout innings for the Cincinnati Reds, but like much of this season for the Reds, even that was not enough. The Reds offense got 10 runners on base through the first nine innings, but could not get any of them around to score. Cincinnati had multiple balls hit that would have been a home run at Great America Ballpark, but Chase Field plays different.

After Mahle sent the game to the 10th inning, TJ Friedl came through with a pinch hit double to put the Reds in front 1-0. Friedl got to third base on a wild pitch, but the Reds stranded him there.

The Diamondbacks got their free runner to score in the bottom of the 10th off Alexis Diaz, but he was able to strand a runner on third base with only 1 out to get the game to the 11th inning.

Kyle Farmer came through big time in the 11th. Diamondbacks pitcher Ian Kennedy had just struck out Joey Votto, and a promising inning with runners on 2nd and 3rd base was looking dicey. Farmer ripped a double, his third hit of the night, to give the Reds a 3-1 lead.

Luis Cessa pitched the 11th inning. He was one out away from his first save with the Reds, but threw two wild pitches to allow the Diamondbacks to tie this crazy game.

The Reds scored two runs in the top of the 12th inning, thanks to an Albert Almora RBI triple and an RBI on Jonathan India’s first hit since returning to the lineup.

Joel Kuhnel got the job done for the Reds in the bottom of the 12th, retiring all 3 batters without allowing the ghost runner to score. The Reds have now won three straight games, and they are 20-17 since May 7th. The Reds also secured their second road series victory of the season. 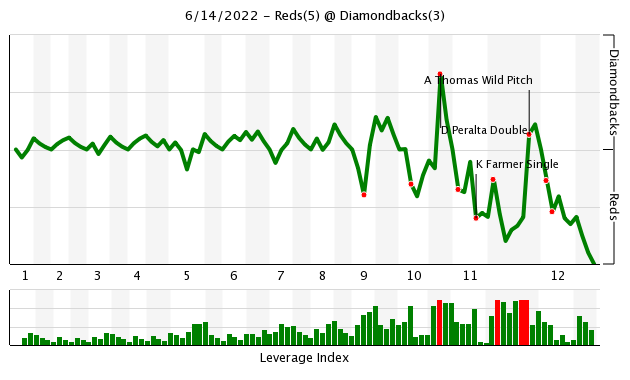 According to Fangraphs WPA statistic (winning percentage added), the biggest play of the game for the Reds was a Kyle Farmer’s 2-RBI single with 1 out in the 11th inning, giving the Reds a 3-1 lead. That play increased the Reds probability of winning by 24.6% (from 55.4% to 80.0%).

Tyler Mahle was just incredible. His final line on the evening: 9.0 IP, 3 H, 0 R, 0 BB, 12. The zero walks is just incredible. I’m not sure enough people realize how big of a loss Mahle will be if the Reds do decide to trade him in a few weeks. Mahle’s FIP for the season is now down to 3.69.

Tyler Mahle of the @Reds is the only MLB pitcher in the modern era to throw 9.0+ shutout innings with 12+ strikeouts and no walks on the road and yet not get the win.

Tonight is the seventh time since 1990 that a Reds pitcher has thrown 9+ innings and received a no-decision.

What more can you say about Kyle Farmer? Another 3 hit day and the game winning hit. Farmer now has a .778 OPS on the season.

Jonathan India made his return to the Reds lineup. He was of course hit by a pitch in his first plate appearance, and then once again in the 8th inning. He is clearly already in mid-season form. India got a hit in the 12th inning – a big insurance RBI single.

Mike Moustakas had a great night at the plate. He had 2 hits, one of them a 417 foot double, but also made a 404 foot out earlier in the game.

Nick Senzel had 1 hit on the night, but also made 356, 395 and 407 ft. outs. Chase Field is tough for hitters. Senzel had 4 hard hit balls according to Statcast.

Joel Kuhnel pitched a 1-2-3 bottom of the 12th inning for his first career save.

The Reds blew a pretty good chance in the 7th inning when JR House sent Kyle Farmer home with just 1 out. Farmer was out by a mile, taking away a chance for Albert Almora Jr. to bat with runners on 2nd and 3rd with 1 out. Both the TV and Radio liked the decision, but I thought it was too aggressive with Farmer running and Almora, who has done a nice job making contact sitting on deck in a 0-0 game.

The big controversy of the night was David Bell not having Nick Senzel bunt in the top of the 9th with runners on 1st & 2nd, with 0 outs in a 0-0 game. There are two thoughts here: Senzel has 0 sacrifice bunts in his big league career, so it’s likely Senzel is not a good bunter and Bell was concerned if he could actually get the bunt down. The other thing is that Mike Moustakas was the next batter. Moustakas in his Reds career is batting .167/.289/.241 in 128 plate appearances vs LHP. Bell did have Matt Reynolds on the bench who actually pinch-ran for Moustakas in the 10th inning.