Luis Castillo gave the Reds six very strong innings, but his offense, defense and the home plate umpire let him down on this night. The Cardinals scored both of their runs in the first inning off Castillo, courtesy of a missed call that should have been strike 3 to end the inning, followed by two Reds errors.

The Reds offense could not get much going on this night. They left the bases loaded in the first inning, and then had one big chance in the top of the 8th, but Kyle Farmer hit a 74 ft Pop Out to end the inning. The Reds have now lost three straight games, while the Cardinals snapped a three-game losing streak of their own. 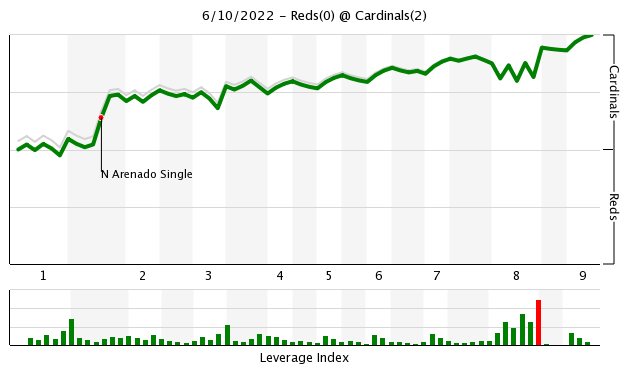 According to Fangraphs WPA statistic (winning percentage added), the biggest play of the game Kyle Farmer striking out with the bases loaded and 2 outs to end the inning (Reds down 2-0). That play increased the Reds probability of winning by 12.9% (from 18.4% to 5.5%).

Luis Castillo was his vintage self tonight. He got some nasty swing-and-misses and a lot of weak contact. He did not have a favorable umpire or good defense behind him. In reality, he should have got through 6 shutout innings, and might have been able to pitch the 7th also if he didn’t have to throw additional pitches because of both the home plate umpire and his defense. His final line: 6.0 IP, 6 H, 1 ER, 1 BB, 3 K.

Aristides Aquino made an incredible catch in the 7th inning that saved a run. Aquino entered today as the National League leader in defensive runs saved among outfielders, which is remarkable since he has less than half of the innings played as most of the other players close on the leaderboard.

Joel Kuhnel and Jeff Hoffman each pitched scoreless innings of relief. That was encouraging for a bullpen that has really struggled lately.

The Reds defense really let down Luis Castillo in the first inning. Two poor throws from Aristides Aquino and Brandon Drury were magnified by seemingly poor effort from Joey Votto to at least knock the ball down to prevent a run from scoring.

The Reds offense just could not get anything going after the top of their order tonight. Hitters #6 through #9 in the lineup were a combined 1 for 14, which should not come as a surprise with the players on the lineup card. The Reds can not get more reinforcements from Louisville from their rehab assignments soon enough.

Robot umpires can not come soon enough. If you ever need an example, watch the inconsistency from tonight’s home plate umpire. Calling balls and strikes is incredibly difficult. Why not take that impossible task away and make the game more fair?