The Cincinnati Reds (19-35) are coming off a rained-shortened, yet dominant 7-0 win last night over the Arizona Diamondbacks (26-30). Hunter Greene pitched the best game of his young career and continued the Reds recent strong run of starting pitching. The Reds starters have a 3.44 ERA (3rd in the NL) and 1.07 WHIP (1st in the NL) since May 12th. The Reds will hope to keep that run going against the Diamondbacks this evening at Great American Ballpark at 6:40 PM.

Graham Ashcraft has been spectacular through his first three big league starts. He only has 9 strikeouts in 17.2 innings, but he has been getting a lot of weak contact as you see below with his Statcast chart. The Dbacks have the 2nd worst strikeout rate in MLB, so this might be a good matchup for Graham to rack up some K’s. 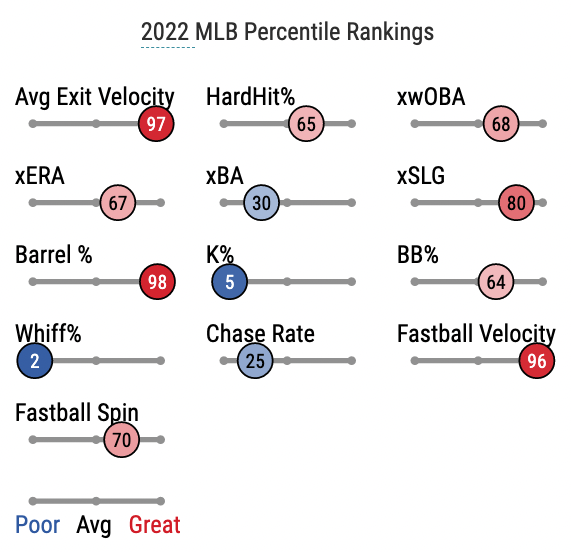 Tyler Gilbert was recalled from AAA today to likely just make a spot start from the Dbacks. This will be Gilbert’s third trip between AAA and MLB this season. Gilbert has a 10.65 ERA/8.75 FIP in 23.2 innings at AAA. He did pitch fairly well last year in a hybrid role for the Dbacks: 3.15 ERA/4.27 FIP in 40.0 IP. He barely throws 90 MPH, but we have seen the Reds struggle at times with soft tossing lefties.

Kyle Farmer ranks 4th in all of baseball in wRC+ vs LHP.

The forecast is 79° at first pitch. The radar looks mostly good in the Cincinnati area, but there is a chance of a pop up shower possibly disrupting this game. The forecast for tomorrow does not look good at all. We might see a double-header on Thursday.

Jonathan India and Donovan Solano will begin their long awaited rehab assignments starting tonight. They are part of an absolutely loaded Bats lineup tonight with Jose Barrero and Max Schrock. This will actually be India’s first ever appearance at AAA as he skipped that level altogether prior to his 2021 NL Rookie of the Year season.

The Reds are 16-13 since the 3-22 start to the season. Graham Ashcraft has been such a breath of fresh air since being called up. The Reds are facing a pitcher that really probably doesn’t belong in the big leagues tonight. Let’s hope the Reds can have another big night and start putting a nice win streak together after this disappointing series over the weekend against the Nationals. Go Reds!