Hunter Greene looked great early on, but the Red Sox broke through and never looked back as they beat the Cincinnati Reds 7-1 on Wednesday night and earned a split of the series.

Cincinnati had four singles through the first five innings of the game and three of those four baserunners were erased on double plays. In the 6th inning the Reds were finally able to break through. Trailing 4-0, Aristides Aquino singled to lead off the inning and then he stole second base. The throw to the bag went into center and Aquino advanced to third. Nick Senzel would ground out to first base, allowing Aquino to score and get Cincinnati on the board, cutting into the Red Sox lead and making it 4-1. It would be the only run that they would get on the night.

Hunter Greene’s first three innings were outstanding. He allowed just one hit and he picked up seven strikeouts along the way while not giving up any runs. But then the 4th inning happened. The Red Sox went double, single, single, double, strikeout, ground out, single and scored four runs before David Bell made a pitching change. Luis Cessa entered the game and got the final out of the inning, keeping the score at 4-0. He’d retire all three batters the next inning, too.

Vladimir Gutierrez came out of the bullpen to begin the 6th inning and walked the first hitter he faced. Alex Verdugo followed with a double to put runners on 2nd and 3rd with no outs. Gutierrez got a weak ground ball back to himself from Trevor Story for the first out and it didn’t advance the runners. Christian Vazquez grounded into a fielders choice when Kyle Farmer came up firing to the plate and he easily tagged out Xander Bogaerts for the second out of the inning.

That was the final batter for Gutierrez as Ross Detwiler came on to try and finish the inning and he did just that on the first pitch, inducing a ground ball to Joey Votto. He was back out for the 7th inning and while he needed more than one pitch to get out of that inning, it wasn’t many more as he threw just 10 of them to get the Red Sox in order and maintain a 3-run deficit.

Jeff Hoffman pitched the 8th inning and things didn’t go well as he walked the bases loaded with one out before giving up a triple past a diving Nick Senzel. That pushed the Red Sox lead to 7-1. It was more than enough to earn a split in the series with the win on Wednesday night.

Key Moment of the Game

The entire 4th inning. Hunter Greene had been dominant, but the Red Sox turned it on in the 4th inning and put up a 4-spot and Greene couldn’t get out of the inning.

The Reds only struck out one time in the entire game. They also didn’t draw a single walk. Boston’s pitchers threw just 106 pitches in the game.

Redleg Nation and Late Night Reds own Nick Kirby showed up on the television broadcast and got a shout out from John Sadak and Chris Welsh during the game. 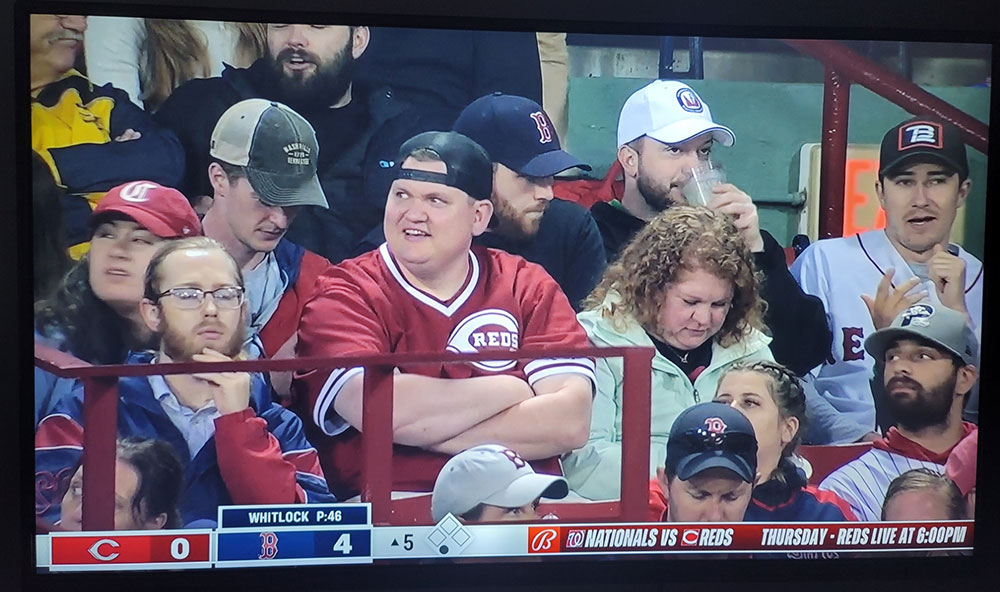