When you try your best, but you don’t succeed
When you get what you want, but not what you need
… I will try to fix you

Jim Bowden was surely channeling his inner Coldplay over at The Athletic earlier this week. Some hail and well met fellow named Mark teed it up for Jimbo, asking what he would do if he were the Reds GM, considering the reality of the Castellini ownership group.

If you have an Athletic subscription and stumbled upon this piece, perhaps you were as dumbfounded as I:

I would begin by investing millions of dollars into improving the baseball operations infrastructure, starting with areas such as research, development, technology and advanced analytics. …. I would then work to hire a strong cabinet around GM Nick Krall that would include former GMs, managers and scouting directors, along with some of the smartest engineers and mathematicians with diverse backgrounds. I would set a goal to hire the best player evaluator and analytics employee who are working with winning organizations such as the Dodgers, Rays, Astros, Yankees and Braves.

Did anyone mention to Jim that the Reds HAD an advanced analytic plan in place under Dick Williams before ownership blew all that up, telling Kyle Boddy and his philosophy to “take a hike.”

Edgertronic slow-motion cameras and Rapsodo pitch-tracking devices became de rigueur at Reds facilities under Boddy, the Reds new Director of Pitching. Weighted balls, which have been part of the Rays Way for some time, became part of the Reds instructional routine. Fresh ideas were the order of the day on the pitching side. New people. New hope.

Even the rest of baseball began to notice: 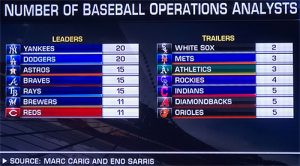 Yeah, the Reds were one of those teams that weren’t just on the analytic train, they were driving that locomotive. Even players were noticing:

A lot of players are begging to be with the Reds because of our player development. Just looking back on my own minor league career I can say that I’m not sure if I would have made it to the big leagues if it wasn’t for people like @ericjagers @drivelinebases and many others

“A lot of players are begging to be with the Reds because of our player development.”

Imagine that. Yeah, Dick Williams had it going on, before somebody decided this was no longer the way to go. Before the guys in the bespoke red jackets decided they knew more than the baseball lifers:

So that's the point of targeting the AGM+ role. I can't say enough good things about the #Reds and DW + Eric Lee's leadership pushing change on both sides of the ball, but eventually management changed, and so did the vision. Which is totally cool. Just no longer a great fit.

Cutting-edge baseball analysis was just no longer a great fit for Reds ownership, so Boddy and his people were gone in the blink of an eye. Minor-league hitting coordinator C.J. Gillman was one of those smart guys who saw the writing on the wall:

“With the direction and leadership in-place when I was hired having moved on, it’s just simply the right direction for me to go personally and for the Reds to go professionally,” Gillman wrote. “I believe deeply in what we accomplished in the time I spent with the Reds. Were we committed to change, the numbers stand up on their own, and I am very proud of that.

Remnants of what was accomplished continue to trickle upward, as we are seeing with Connor Overton:

Was awesome to watch Connor Overton get signed out of @DrivelineBB Pro Day in 2020 after being in indy ball, then battled his way through the pandemic and into the big leagues with TOR, PIT, and now seemingly finding a home in CIN, really pitching his ass off. #prodaystories https://t.co/XZGm1VWNUC

Been awesome to watch Graham's meteoric rise through the system – he developed an extremely detail-oriented mindset about developing command/arm health.

Would even take his phone out to pregame throwing while he used @DrivelinePulse to meticulously track workload. https://t.co/qgYrzgLpd0

Bowden seems to have forgotten all this, or thinks ownership is suddenly going to reverse course once again. That would mean admitting they are wrong. They aren’t doing that.

At the trade deadline, I would shop everyone on the roster outside of Jonathan India, Tyler Stephenson and Hunter Greene ….

Three guys???? That’s it? The idea that you would part ways with the Nicks—Senzel and Lodolo, not consider signing Castillo or Tyler Mahle, stripping it all down to 3 guys is a dumbfounding idea. It’s just starting all over yet again. It’s more of the same. An endless carousel of cheap players coming in, players with expiring team control going out. If Hunter Greene becomes a successful starting pitcher, he’ll be just like Castillo, a star player the Reds don’t want to pay, just when they need him the most.

I would then put together a five-year plan with clear budgets to guide the baseball operations staff as they build their blueprint.

It would seem the Reds have a clear budget assigned to baseball ops, one that is spartan and rejects what ownership now sees as the wanton free agency ways that resulted in Mike Moustakas and Shogo Akiyama.

I would make everyone in the organization accountable.

Who makes ownership accountable? Again, look upward to the suites, Jim. That’s where the problem is.

I would mostly build the team through the amateur and international drafts, trades and waivers claims. But I would also sign short-term free agents who could be flipped at the trade deadlines. When the team was ready to be a perennial contender, I would target significant free agents, here and abroad, who were entering their prime years (preferably in their mid-20s) and fit within the five-year player budget.

The Reds are already doing some of this. Trades won’t bring much back for Moustakas or Tommy Pham in particular, who suddenly looks worthless in light of yesterday’s immature shennanigans. Trading Castillo defeats the whole purpose of building a sustainable pitching staff. Players of La Piedra’s talent are rare. And he’s here. Why trade him for lottery tickets that will take years to develop, only to send them off to greener pastures in NY and LA when success makes them too expensive to “align with our resources“? If they aren’t willing to pay him now, what makes anyone think they will be willing to target significant free agents at a later date, either.

Reds ownership walked away from the collective bargaining agreement angry. They’re committed to playing a different kind of ball. Call it low financial risk baseball. It feels like the fast track to losing baseball.

And … as soon as I won the first World Series in the Queen City since 1990, I would sell the team to Elon Musk or Jeff Bezos so they could maintain the roster financially.

Sure. What planet is Bowden living on?

Of course, this is the same Jim Bowden that once predicted this Francisco Lindor trade:

“Lindor is traded from the Cleveland Indians to the Cincinnati Reds in exchange for outfielder Nick Senzel, infielder Jonathan India, right-handed pitcher Tyler Mahle, and a player to be named.”

Fixing the Reds is going to take a change in leadership at the very top of the food chain. That may be just wishful thinking. To paraphrase an old Rick Pitino line from a press conference during his tumultuous days with the Celtics: