Cincinnati was able to win the last two games of the series against the Cubs, earning a split against Chicago. Tonight they welcome in the San Francisco Giants for a 3-game series. The Reds will send Graham Ashcraft to the mound for his second big league start. San Francisco will hand the ball to lefty Carlos Rodon. First pitch is scheduled for 6:40pm ET as long as Mother Nature cooperates.

Here are the lineups for this evening’s contest:

An earlier version of the lineup had Tommy Pham batting 3rd as the designated hitter. However he has been scratched from the lineup and replaced by Alejo Lopez, resulting in some lineup shuffling as well.

With only one start under his belt, citing his splits in the big leagues doesn’t make a whole lot of sense. On the season between his time in Triple-A and MLB he’s held righties and lefties to pretty much the same line – one has a .584 OPS against him and the other a .586 OPS against him. He’s only given up two extra-base hits all season  – both of which were doubles. One came in the minors on May 1st and the other came last weekend against the Blue Jays in Toronto.

In seven of the eight starts made by Carlos Rodon this season he has been dominant. But on May 15th he got beaten around like the Cardinals knew what was coming. St. Louis tagged him for eight runs in 3.2 innings, making up eight of the 17 runs he’s allowed all season.

If you are a lefty, you basically have had no chance this season. While teams have avoided sending left-handed hitters to the plate against him, the ones who have been in the lineup have just two hits this season against him and both of those hits were singles.

As you probably could tell already by getting to this point of the article – Graham Ashcraft has been called up from Triple-A. That, however, was not the only move of the day. The team put Justin Wilson on the 60-day injured list to open up a spot for Ashcraft on the 40-man roster, activated Ross Detwiler from the bereavement list, and optioned Jared Solomon and Colin Moran to Triple-A Louisville.

From Charlie Goldsmith of the Cincinnati Enquirer: 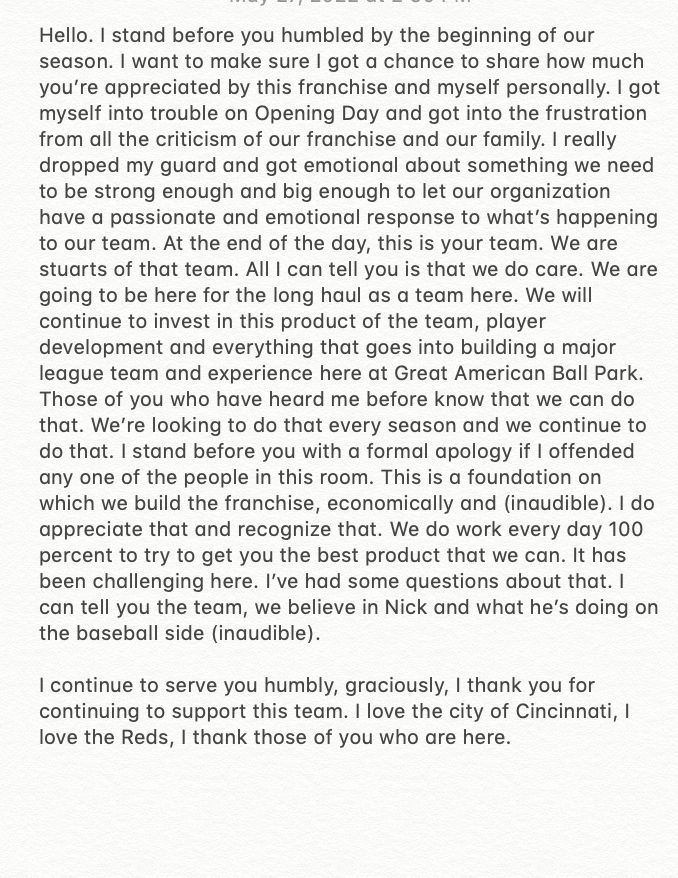