Joey Votto is hitting .122/.278/.135 as we wake up on Tuesday, May 3rd, 2022. To say it’s been a tough start to the season for the Cincinnati Reds first baseman would be an understatement. He’s been terrible, and that’s putting it as nicely as possible. His slugging percentage would be a bad batting average for a pitcher if they were still being forced to hit. Dan Szymborski wrote about Votto’s slow start for Fangraphs on Monday.

“While I’m hoping that it turns out that it was the bats, and there’s some classic Votto just waiting to break out, I’m pessimistic for a few other reasons,” Szymborski wrote before getting into that he’s been making worse decisions on what to swing at and swinging and missing at a lot of secondary offerings that he didn’t use to. There’s a lot more in the article that you should go read, including how other players his age who have gotten out to poor starts rebounded – or didn’t – the rest of the way. It’s not for the feint of heart.

But maybe Joey Votto isn’t that guy. Last night he tweeted out, in response to the article: Five months to go. Enjoy the show. 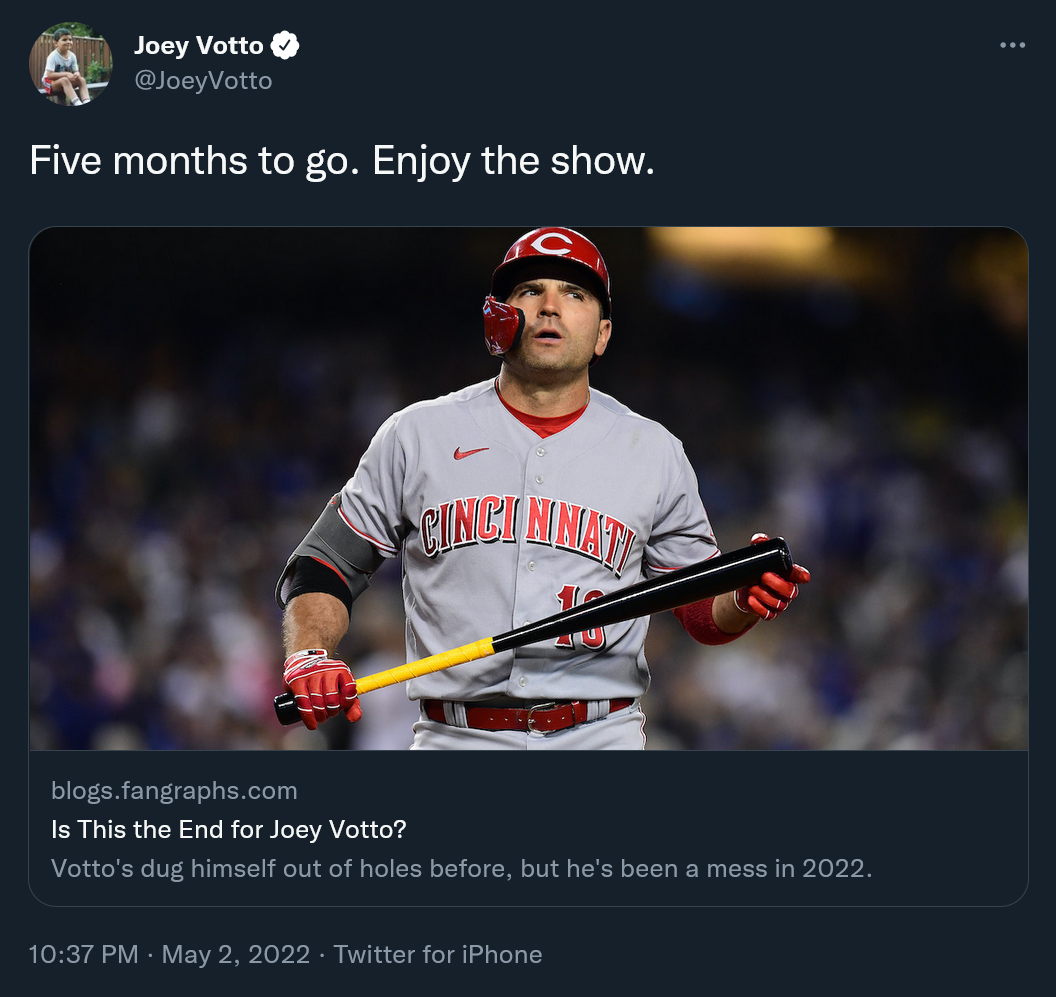 Joey Votto has never backed down from a challenge in baseball. He’s dealt with plenty over the course of his career, both on and off of the field. And to this point, he’s always been able to overcome. Who can forget the famous photo of Votto wearing a “Decline Phase” shirt during pre-game drills just before the 2019 season? Of course the reason that shirt exists is because unfortunately for all of us, Father Time is undefeated. Some can keep him away longer than others, but eventually he comes out on top.

As noted in the Szymborski piece – Joey Votto recently went back to his old style of bat. Votto spoke with C. Trent Rosecrans of The Athletic about it. Perhaps that played a bigger role in what took place in April than we currently know. Maybe the approach he’s taken needs to once again be adjusted. We’re all going to have to watch and find out together, but it seems that the Reds first baseman wants us to enjoy it. Let’s hope we can.