He told us where to go, and so we did;  this weekend, as the Reds were in the process of losing to the Cardinals, the sun shone upon the winners and the losers alike and the city came out to play in our side yard, Eden Park. 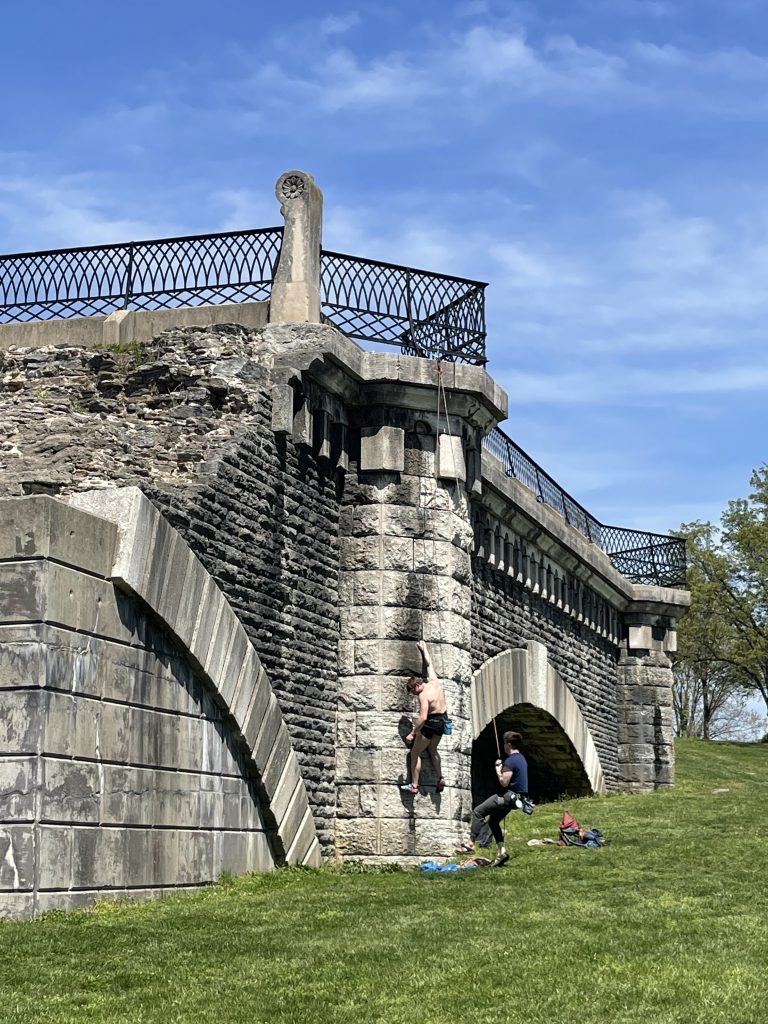 Maybe this made an impression because part of my heart resides in the West, where people regularly climb sheer cliff faces at heights of anywhere between 200 feet and oh eff no. So watching the grappling gear come out for a structure which small children were clambering over just around the corner caught my attention.

Even for beginners, this was an… interesting choice, as even the indoor climbing walls for kids’ birthday parties contain at least an oddly placed notch or two. But here’s what’s awesome about Captain Rappel and Boy Beyaler: They were making do. They were starting somewhere. We don’t have an El Capitain here in the 513, so they were climbing what’s available.

It was certainly more than I was doing, firmly on the walking path and previously considering the chick on the yoga mat sitting in the classic meditation position as the most exotic thing I’d see that day. So as the groups of picnicking gals and families with trotting doggies fanned out around us, I snapped a photo. I was impressed.

If you’re going to develop upper body strength, this was by far the more Instagrammable way to do it. Big style points energy. This had the guy doing push-ups by the reflecting pool beat by a wide margin. These guys saw what I’d previously considered just a remnant of crappy city water, and they saw a mountain to climb. This was the hard way up; they took it anyway.

Now I wasn’t even aware that the Reds were playing just a few caber tosses downriver; I doubt most people in Eden Park that day were. They were busy rolling up in hammocks and pointing at ducks, all vital activities on the first 75 degree day of the year. The team schedule didn’t even occur to me until later that evening, when I was hobnobbing in Over the Rhine and wondering why so many people were wearing Cardinals jerseys.

Eden Park was once considered a wasteland of rocky hillsides and scrubby trees. After a few bottles of wine and a gazebo or two, it is now the venerable crown jewel of our city parks. That began when city father Nicholas Longworth transformed it into a vineyard. That vineyard became the inspiration of the Longfellow poem “Catawba Wine.” That poem became the basis for Cincinnati’s title as the Queen City. That title predates the Reds by a good 15 years.

It took some growing. It took some climbing. And here we are, with five World Series titles in the trophy case and our emotional trees firmly rooted in a franchise that was a franchise before franchises. We took the hard way up.

Baseball is not an easy game. But being a fan shouldn’t be this difficult. We shouldn’t have to make do and anchor ourselves to what’s simply available.

Style points will only get you so far. After a while, you start to wonder what it’s like to set your sights a little higher.