The Cincinnati Reds (3-13) finally ended their 11-game losing streak on Sunday with a well played 4-1 win against the Cardinals. The Reds were able to take some rare positive vibes into an off-day yesterday, and they will look to win two games in a row for the first time in 2022 tonight at 6:40 PM against the San Diego Padres (10-7).

Tonight will mark the return of the Reds highest projected wins above replacement player, Jonathan India to the Reds lineup. The Reds will also see the return of Jake Fraley, who has missed the past 10 games with a knee injury.

Reiver Sanmartin will face the Padres for a second straight start. He got hit fairly hard in his last start (5.1 IP, 8 H, 5 ER, 1 HR), but he did only walk one batter. It was fairly surprising the Reds didn’t choose to go with an opener after an off-day. Machado has a 1.515 OPS vs LHP this season. It seems like it would have been a good idea to have a RHP face him at least the first time through the lineup, especially with how well that Sanmartin pitched after an opener against the Dodgers (credit to @redsinfour for the thought on this).

Joe Musgrove has been really good this year. He is in a contact year, and looks like he is going to get paid this off-season. The Reds weren’t great vs Musgrove last week (6.1 IP, 4 H, 2 ER, 1 BB, 7 K), but hopefully the Reds can have some success seeing him twice in a week. Tyler Naquin is 0-9 in his career vs Musgrove, but he was not in the lineup last week. Naquin is obviously a really good hitter vs RHP, so hopefully he can help. Votto has really good career numbers vs Musgrove, so hopefully him getting on base 3x in the last game can translate into a big game tonight. 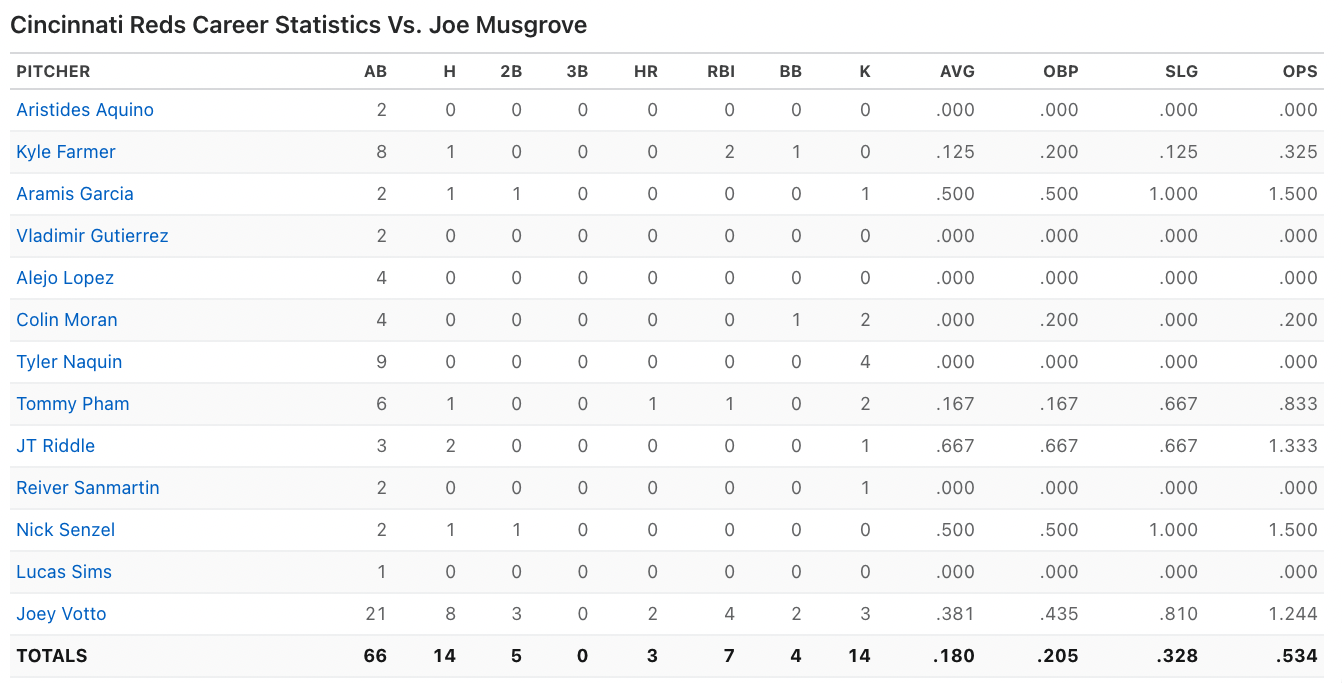 What a breath of fresh air this lineup is. Every player the Reds are trotting out tonight is at least a legit big league player. Moran is a liability defensively at 3B, but him batting 7th against a RHP shows how much deeper this lineup is than anything they have run out the last couple weeks. India will get all of the headlines for returning tonight (and rightfully so), but Jake Fraley returning is big too. Fraley had a 130 wRC+ last season vs RHP.

Jonathan India was activated from the injured list, Matt Reynolds added to the roster

Jonathan India came off of the injured list this afternoon and the team also officially added Matt Reynolds to the roster. That led to Alejo Lopez being sent to Triple-A and JT Riddle being designated for assignment.

Active rosters return to 26 players on May 2. Teams will be allowed 14 pitchers. https://t.co/zVtwBWbUp0

He just took batting practice. No updated timeline yet.

Congratulations to Ron Roth, who tonight is working his 1,000th game as an official scorer for Major League Baseball.

Ron has been an official scorer for MLB and @Reds for 44 years.

Thank you @RedsPR for saluting his accomplishment right at the top of the game notes. https://t.co/fpL5K8PdiS

Hunter Greene will likely start Friday or Saturday in Colorado, David Bell said. He had his start date pushed back following an outing where his velocity was down.

The Reds are coming off a win, they have got two good players returning to the lineup and they are playing at home. Let’s hope the rare positive vibes from the start of this 2022 season can continue tonight. Go Reds!