As I’ve attempted to write professionally for 31 years and still, largely, have no idea what I’m doing, I constantly seek counsel. Currently, I’m reading Handling the Truth by a fellow Beth, a Ms. Kephart. This Beth is a far better college teacher than the Beth typing right now, at least in the sense that she clearly has more than one second of patience for people who have enjoyed twelve years of education and who still insist on beginning every single assignment with: “In society today, things…”

In one of her memoir courses, Beth Kephart told her class to go outside and take some pictures. She trailed them through the campus as they began what was surely an obvious assignment about choosing imagery. Then she hauled them back into the desks. Then she rocked their things-assuming worlds in society today.

“Pick one of the photographs,” she told them, “and write about what’s in the background.”

We tend to miss that part of our lives, don’t we? And yet that’s the necessary stitching of it all. We are approaching mid-March and we have not seen a single pitcher throwing to a single catcher. That’s the central focus of our photograph as baseball fans. But why are we paused, and what does that say about the sport, and the MLB (for they are not the same), and us, and what’s important?

That’s the background, and that’s where the real story is.

Here in the quiet of the daffodils pushing up from the frozen mulch and the first fish fries of Lent, I sought out the first time someone thought to freeze for posterity the progress of a baseball game. And, exactly as I did not expect, the result isn’t even a picture of a baseball game. 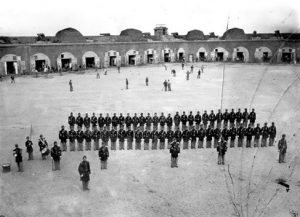 The first known picture of a baseball game was taken in 1862 in Savannah, Georgia, at Fort Pulaski. The photographer meant to capture a posed, uniform-shiny image of the 48th New York Volunteer Infantry. There was a war on, you see. These men were preparing to both inflict and recieve death. This could well provide the only preservable image they left behind. But in the background are the loose figures of men going about living.

It was thought to be impenetrable. Fort Pulaski was meticulously engineered, deeply foundationed, and bound by 25 million bricks. And it was ruptured in about a day and a half, because it was built for the techniques of the War of 1812 but didn’t see action until the formation of the Confederacy. Union forces didn’t even have to come within five miles of Fort Pulaski. They just shot at it with rifled cannons that hadn’t even been imagined when the first piling was sunk in the mud.

We’re concerned that baseball as we know it is dying, and we always assumed that the fatal blow would come from close-range opponents: Other sports, stadium tax referendums, the price of beer. We never anticipated the deep infliction of cultural wounds crashing in from five miles away or, even worse, from destroyers on the inside.

This photograph was taken not long after Fort Pulaski fell. The men playing baseball are fellow soldiers. I am not sure what became of these members of the 48th New York Volunteer Infantry. I do know what they heard. They heard exactly what we heard in 1901 and 1944 and 1978 and 2022, from radio to television to wifi signal: They heard shouts of celebration, the pop of a ball against a small straight object, the murmur of the spectators discussing dinner prep. They heard, in the midst of war, the sounds of life.

That is how baseball binds us; it’s never the games that we follow pitch to pitch or with constant half-inning check-ins. It’s the transistor on the back porch, the human voices softening the sharp mechanical measures of a heart monitor in a hospital room, the soft undercurrent of parents applauding an actually-caught pop fly.

And so fittingly, the first known picture of a baseball game is not, in fact, of a baseball game. Why were these men hard at work on a child’s pastime? They were bored, or they were scared, or they were out of shape, or all of it or none of it. Baseball was the natural progression of Americans gathered in one place for more than an hour. It soothed, it distracted, it strengthened, it bound the galaxy together.

Maybe these men went back to the farm or the factory and lived long, happy lives. Maybe they didn’t. But no matter the direction of their days after they broke from this formation, I am glad that, if only for the moments it took them to assemble in two parallel lines and adjust their hats to precisely the correct angle, they heard the comforting sounds of one on with no outs.