I love pro football. I have as far back as I can remember. My first sports hero was Roman Gabriel. You probably don’t remember Gabriel because the rings of your personal tree don’t run as deep and aged as mine, so indulge me while I introduce you to him through the eyes of a thirteen-year old boy. 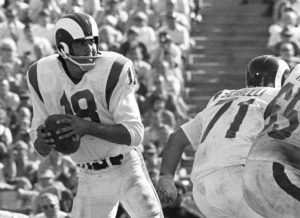 He was, to put it simply, a god in shoulder pads. He was tall. He was strong. He was Hollywood handsome. He had a cannon for an appendage, an arm that led a mighty Southern California team full of talent. He was the MVP of the NFL in 1969. He had Bernie Casey and Jack Snow on the receiving end of his scud missiles. He had 11-time Pro Bowl guard Tom Mack protecting his flank. And, of course, there was the thundering Fearsome Foursome — Deacon Jones, Rosey Grier, Merlin Olsen and Lamar Lundy. They had an innovative and driven head coach in George Allen. And then, there were those helmets. God, I loved those helmets. I lived and died with that team.

It wasn’t all touchdowns and rainbows. To be a fan of those Rams was a real character-builder for a young boy. Yes, they had five straight winning seasons and secured two divisional titles. But, for all the winning they did, they were a soap opera of a franchise that could never capture the big game. There always — and I mean always — seemed to be a meaningful Sunday when someone else seemed a bit better. At one point, Rams owner Dan Reeves wanted his head coach gone, but even firing him backfired as his players revolted, forcing Reeves to reinstate Allen.

I cared way too much for my bridesmaid Rams and my father found more than a little amusement at the abuse I laid upon his Naugahyde recliner while watching my Rams succumb once more to Joe Kapp and those hated Purple People Eaters from Minnesota. By the time I finally witnessed my first Rams Super Bowl, the quarterback was Warren Beatty and I was in a movie theater in Florence, Kentucky.

But time marches on. The Rams got old. Gabriel would be traded to the Eagles. The Cincinnati Bengals, always lurking on my periphery as a young man in Northern Kentucky, became my new team.

The Bengals were a team worth watching in those years. Paul Brown brought history, respect and a Beau Brummell fashion sense to a fledgling franchise trying to find its rightful place in the league. Players like Ken Anderson, Issac Curtis, Dan Ross, Anthony Munoz, and Reggie Williams made you proud to wear those funky pajama-like jerseys in public. Two trips to the Super Bowl and names like Boomer, Ickey, Wyche, Collinsworth, Fulcher and Brooks kept you looking up-the-road to Wilmington, Ohio and the next NFL training camp.

We couldn’t know it then, but it would become a turning point. Whoever else son Mike Brown is, he was never his father when it came to running a football franchise.

This is an important point right now as some are using this football season’s unique and almost unprecedented turn of events as a cudgel to bludgeon the rich family up the street at 100 Joe Nuxhall Way. As if we need another tool to swing at Reds ownership for wasting a promising season by shopping for relief pitching in Aisle 8 at Walmart, instead of keeping the talent they had, or, you know, investing in a product upgrade.

But let’s not pretend the Brown Family hasn’t been just as clueless and cheap when it comes to running a professional sports franchise. For now, they get to bask in the reflected glory of Joe Burrow and Ja’Marr Chase. Should Savior Joe suffer another injury due to ownership’s inability to build an offensive line worthy of The Franchise, watch public sentiment pull a 180.

When an 8-year old boy asked me what NFL hat he should take home with him from the Lids store at the South Street Seaport in Manhattan, I hesitated. Would social services come after me for knowingly relegating my son to a lifetime of Bengals misery and regret? I kept my own counsel as he wandered over to the expanse of green Jets hats that dominated the wall. Then, to my surprise, he stepped a few feet to his left and pulled down an orange and black striped hat.

And with that it was done. We left the store, son with a new team, father with an emotional cocktail, equal parts pride and apprehension.

All you need to know about the Cincinnati Bengals happened on a single date: January 9. On that day in 1963, Art Modell relieved head coach Paul Brown from his duties, a team that he created in 1945, coached for 17 seasons, a team that bore his surname on their helmets.

For their part, the Brown Family never forgot. Mike Brown abhors being told what to do. In fairness, so do most of us. But, most of us don’t run professional football franchises. Most of us don’t have fathers who had their life’s work and legacy stolen out from under them. If you want to understand why the Bengals are who they are today, you need to go back to that January 9th, when the man who led a Cleveland team that bore his name to seven championships suddenly found himself on the outside, his nose pressed against the glass.

[Mike] Brown still remembers details of his father calling him on the day Modell fired him.:
“He said to me, ‘They took my team away from me.’ That’s about the only time his voice ever broke when speaking with me.”

Fifty-three years later to the day, on another January 9, this one the year of our lord 2016, the Bengals suffered perhaps their most ignominious loss, a Bengal meltdown to end all meltdowns. A heroic comeback by a backup quarterback against a hated rival in a driving rain was thrown away by a couple of knuckleheads their head coach had long ago shown he could not control. If only this Isle of Misfit Boys could have kept their counsel for one minute and thirty-six more seconds.
They lost me forever that day. Or so I thought at the time.

To be a fan of these Bengals was a real character-builder for an old boy. Yes, they played in five straight playoff games and secured two divisional titles. But, for all the winning they did, they remain a soap opera of a franchise that could never capture the big game. There always — and I mean always — seemed to be a meaningful Sunday when someone else seemed a bit better. Joe Kapp and the Vikings — meet Ben Roethlisberger and the Steelers.

The Brown Family listens to nobody now. They’ve long ago circled the family wagons. They know what they know. And what they know is that no one can be trusted. No one gets into the inner circle, now. No one takes their team away from them this time.

Cincinnati knows about circling the wagons. And no, I’m not talking about local chili pride. Upriver a quarter of a mile, the Reds are trying to sell tickets, pretending it’s business as usual amid a lockout that threatens another season, this one a pandemic of owner greed. It’s a particularly bad look for the Castellini Family, who’ve gone from “all-in” to what looks like “all-out,” selling off assets and dismissing smart analysts at a time when the farm system is just beginning to pay off. It’s an ugly hokey-pokey game being played with the fans, who suddenly—laughingly really—are asking why they can’t be more like Mike Brown.

Cynicism always came easy for me when the subject turned to the local NFL franchise. Years of watching the owner sabotage winning by allowing the likes of Adam “Pacman” Jones and Vontaze Burfict poison the locker room was compounded by years with a scouting department as lean as one of those forlorn, caged dogs in an ASPCA commercial, all the while holding hostage Hamilton County with stadium demands. Today, public sentiment has largely changed. Read the comments in the sports section of the Cincinnati Enquirer and you’ll actually find people defending Mike Brown’s refusal to provide a practice bubble for his team. That’s what winning does. Games etched into the win column are the sugar that makes the medicine of losing go down—with a big dose of amnesia.

Nearly 40 years after leaving the Ohio River valley for New York City and my future, I’m back. I feel the pull of old roots, deep and fertile. There’s no getting away from those familiar feelings when you can see the sun rise over the Ohio River outside your living room window every morning. My new little hometown, named Who Deyton for a few days, is in full celebration. And like Michael Corleone, I feel myself getting pulled right back in.

What’s the lesson Bob Castellini takes from all this? Is it “a commitment to winning” that redeems even the likes of Mike Brown and his shoddy ownership, even if that winning is largely a product of miserable seasons and a once in a generation draft pick? Or is the lesson more prosaic; that “we’re all just suckers,” so hungry for even a morsel of winning, we’ll always come back in the end, no matter how they ignore us, no matter how often they turn us upside down, shaking us until the last bit of coin falls from our pockets and into their outstretched hands before sending us back through the turnstiles and into the night?

Just as I walked away from Major League Baseball after the strike in ‘94, only to return when my child beckoned me back thru the gates, he and my city beckons me back once more. Why? Because the Schotts, the Lindners, the Castellinis, and even the Browns are just temporal actors on the local stage when all is said and done. The jerseys will always say “Cincinnati.” We know that. And boy, so do they.

And here we are.

As the clock ran down at Arrowhead, the improbable was happening. Eighteen long years removed from the day he pulled on that funny orange hat, a son’s loyalty is being rewarded. He walked out of Gerry’s Place into the winter darkness of our familiar New Jersey sports bar parking lot, facetime’d me with the news, tears streaming down. 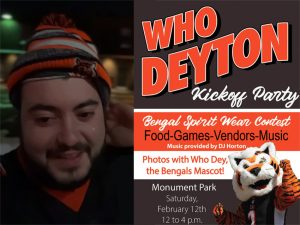 Now, he tells me Joe is bringing the Lombardi home. Win or lose, I sure hope Bob Castellini is paying attention.