In a trim, well-mowed suburban home on the West Side, the Christmas tree is still up. This challenges even the hardest of hard-core Catholics, who tend to nurse their poinsettias along until February 2, the traditional Feast of Candlemas, which trundles along a good 40 days after Christmas. This is what Cincinnati sports have done to my sister’s living room.

My sister, an accountant by initial trade, is a supremely organized and sensible sort. Normally her Christmas decorations are neatly folded back into their boxes by Epiphany. But here she is, barreling towards Valentine’s Day and the fake evergreen still on display. After much discussion, she removed the ornaments; my nephews replaced them with the negative COVID tests they must submit to play sports. But otherwise, the tree stands as a testament to how very, very terrified we all are to somehow screw this up.

“I hope the Bengals realize how stressful this all is for the rest of us,” she said last week when I consulted her for a ruling on whether or not I should, as I did last week but not in the other playoff games, provide her family with a Bengals-themed dessert.

I speak from experience. The loss of the 1989 Super Bowl was due to my own sad negligence. My birthday took place a few days before the game. I blew out the candles, announced the dedication of my wish to a Bengals victory, and was immediately subjected to a verbal pummelling by every single family member present: “Well now it won’t come true!” I shrugged and plunged my fork into an icing rose. My confidence in the no-huddle offense was supreme. And we all know the outcome.

Now, however, the entire city is terrified. We don’t want to blow this. We know what’s at stake here. This comes once in a half-century. If this team loses, none of us want it to be our fault. The Reds aren’t going to save us the way they did in 1990. We’re looking at dispatch after dispatch from the lack of progress in talks between players and owners, and not only are the Reds far from playoff contention, we’re far from any contention at all. We have long since come to expect the absolute worst, and so this whole town has been beaten into superstitious submission.

What interests me about this is that football doesn’t tend to attract the fatally superstitious. That is baseball’s territory. Perhaps the speed with which football has superseded baseball as a fantasy sport has led to a nationwide revision of rules regarding often we wash our game-watching underwear.

So now we wait. This is still very much in our hands. We must not merely order pizza for dinner; the pizza must come from LaRosa’s. The same people shall re-convene at the same time in the same place with the same snacks (I sincerely hope you were surrounded only by those you can stand to share a room with for the Wild Card game; otherwise, you have suffered a very long playoff run.) 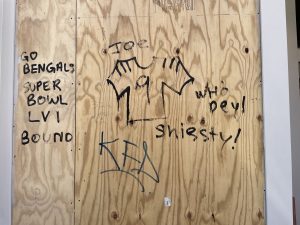 As I watched even the local graffiti take on a Super Bowl tinge, it became clear that we feel an outside sense of responsibility. In a society seeming to spin faster and faster beyond our own control, we have, at the very least, our insistence on hand-grating the cheese for the Skyline Dip instead of sprinkling the store-bought because that’s what seems to work.

It’s tough to feel like simply letting others in line ahead of us at the grocery or casting our sole vote makes a difference when the world starts to burn… so here we are, grimly buying the same beer we cannot stand for the fourth week in a row. But we submit to the tyranny, because You Can’t Be Too Careful.

Ownership is far more stressful than renting. But, of course, the payoff is greater in the end.