The last time the Bengals were in the Super Bowl, pop station Q102 instructed everyone to “get your tape recorders ready” at a certain day and a certain time because they were going to play a block of Bengals-related Super Bowl music. So we all taped over the gaps at the top of our cassingle of “That’s What Friends Are For” and hovered our fingers over the record button at the appointed hour.

The last time the Reds were in the World Series, they hosted it in Riverfront Stadium. Riverfront was demolished in 2002, a full two decades ago now.

This year, Great American Ball Park banned fans from bringing backpacks into the stadium– except for team-branded Reds Head bags.

The last time the Bengals were in the Super Bowl, my mother was driving me to crafting lessons, and I prided myself as borderline competent at it. Behold: 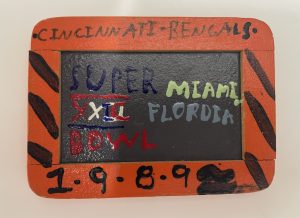 This year, I scraped my SUV crossover against a pole because I struggle mightily with driving a larger car, but I needed it because my mother can no longer physically manage the act of bending low enough to get into the likes of a Corolla. I turned down an invitation to a “Sip and Paint” party because as a college senior, I discovered I have learning disability that affects fine motor control, and I would wind up with a humiliatingly ruined canvas that I’d carefully dry, cart home, and hurl directly in the trash.

The last time the Reds were in the World Series, Lou Piniella was the manager.

This year, Lou Pinella is 78 years old. He retired after 50 years in the sport back in 2010. Our current manager is David Bell, third in a generation of Bells to engage with the team. David Bell has a .492 winning percentage. Tony Perez, who managed the Reds for a grand total of 44 games in 1993, had a winning percentage of .455.

The last time the Begals were in the Super Bowl, it was an age in which winning sports teams were expected to get in a recording studio and release a single. I wish I were making this up. The 1988 team’s result, “The Who Day Rap,” was released as a 45 single. 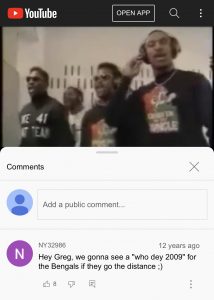 On the YouTube copy of the music video (they also had to do a music video, children), someone typed a comment about updating the song for the 2009 Bengals team. That team lost in the Wild Card round. The song was recorded 33 years ago. The comment was left 12 years ago.

This year, the song was remixed, and a company specializing in social media releases and podcasts shot an accompanying video. The single will release on all streaming platforms this week. Ickey Woods is 55 years old.

The last time the Reds were in the World Series, they were invited by President George H. Bush to visit the White House.

This year, the Reds ended the season third in their division. Since the 1990 team, four men have served as President, one of them Bush’s son, and three of them for two terms. Bush has been dead for four years.

The last time the Bengals were in the Super Bowl, I was in sixth grade and eager to become an astronaut. The only way to be a writer was to start as a newspaper journalist with a word processor or maybe a novelist with a typewriter.

This year, Joe Burrow is a factory of gladness. The space shuttle I wanted to fly was retired over a decade ago. I am a mid-career writer on a laptop that weighs four pounds. To become a columnist, you just tap your phone a few times.

The last time the Reds were in the World Series, fans were enjoying a fancy new JumboTron video screen that was installed for the 1988 All Star Game. One pixel burned out and remained so for many years.

This year, Cincinnatians gathered before a giant screen mounted in front of Great American Ball Park. To watch the Bengals in the AFC championship game. 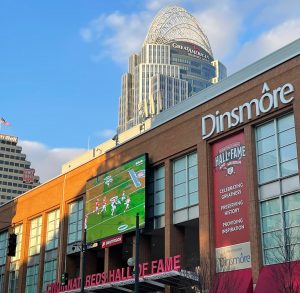 Maybe next year I’ll link to this post marvelling at how far away our pessimism seems, applauding the Reds for putting the right people in the right place at the right time and updating every single reference here.