If this is all we get, as a city, we need to grasp it.

I have no emotional connection with the University of Cincinnati outside of possessing several family members who attended there and my parents’ curious prohibition that I should even apply there myself. As a high school freshman–the same year UC reached the Final Four– I attended a summer workshop on media there. We were placed in Calhoun Hall. Here is where I discovered that condoms are available via bathroom vending machine. That this was a great shock and tremendous shelter-break should indicate how long ago any team in this town has come anywhere close to championship advancement.

As long as I’ve lived here, Clifton is a thing to be anxiously driven through and avoided. Where do you park? Who’s next going to leap out in front of the front fender, head buried in phone? Why so many hospitals? Stop being one-way!

So I cannot name a single player at a single position on this undefeated Bearcats team save for a friend’s nephew. Yet, I reserved two seats at a local Cotton Bowl watch party for New Year’s Eve Day. I did so despite having zero emotional investment in college football and an even dimmer desire to spend time around other people, 99.999% of whom I have never met.

I did it because winning is fun.

Entire generations have grown up unaware of this, particularly Reds fans. The Bengals will start well, then commit fourteen penalties in a row, enough to back them right up into the opposite endzone and eventually out of the season. The Reds hang around the margins until they actually have to do something about toppling themselves into the wild card race, then collapse immediately.

But I am of a chosen age; I saw a Super Bowl visit and a World Series championship, and I saw them as a child. And these events touched every aspect of every life. There were Who Dey Sundaes for sale at Northgate Mall and prayers in churches for the health of the bullpen. Entire classrooms did the Ickey Shuffle. There were trademarked hairbows. It didn’t matter how you voted or who you loved. We were in this together.

It was rare and it was the very best of humanity, and I miss it. So when I saw an updated AP poll in the grocery store, I bent over my phone and put in the RSVP. It was homemade, earnest– a monolith of hope. 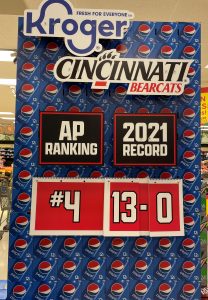 We introverts prefer life on the self-side and to endure our commercial breaks in private. But not when everyone’s backing a winner. When there’s a winner on the big screen, you high-five strangers, slosh the beer, share the humanity.

It happened used to happen in this town, I promise. Perhaps it will happen once more on our baseball diamond. Until then, we take solace in the spiral-bound record keeping in the aisle of the Kroger.

Best of luck to the Bearcats. You made us be in this together.