Early in the season, I shared with you the important baseball tradition known as Cleting out, the process of abandoning a sporting event, live or otherwise, earlier than hoped for or expected. It is named for the origin of the practice, my awesome maternal grandfather, who taught me early that disgust and missing the cutoff man go hand in hand.

Since this piece was published, our readers have posed many valuable questions about the finer points of telling the home team who’s really in charge here. Therefore, in honor of one of Clete’s very favorite holidays– he commanded his own personal bowl of mashed potatoes from his station at the head of the table on Thanksgiving– I would like to clarify the delicate etiquette of Cleting. 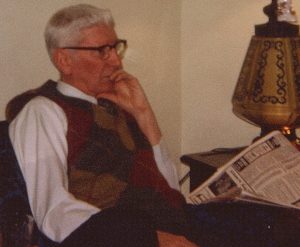 Clete prepares to render judgement on the mid-stage Big Red Machine performace of the Reds.

Can one Clete out of other sports?

RULING: Yes. The value of Cleting out may be applied to other activities. My mother carried out a high-stakes Cleting of the Bengals during Super Bowl XXIII. She vanished into the the living room with a video disk of State Fair at halftime and was never seen again. I joined her for the occasional update, as well as “It’s a Grand Night for Singing,” but could not bring myself to pull the trigger on a full Clete. She was the happiest person in the city for those final 34 seconds.

I once Cleted out of a figure skating competition after my favorite fell. Mid-routine.  Just… zap, blank screen. Done with you.

What if one is viewing a tape of the game?

RULING: You’ll note that I didn’t use the term “DVR” here. This is on purpose. Clete went to his eternal reward before DVRing was a common practice, and it would have absolutely terrified him. However, the act of Cleting out forced him to become adept at using a VCR, for viewing purposes, at least. What else was he going to do for entertainment when John Franco walked in a run but turn to yet another screening of Roman Holiday?

Therefore, in the case of viewing a recording of a game, it is indeed permissible to return to the proceedings in the event the team has straightened itself out. The players have clearly received the message after the fact; you have made your point by fast-forwarding the frightening and anger-inducing parts. You have registered your disapproval, and that’s what really matters.

If you Clete out of a game you have been watching, can you return to it in another format, such as radio?

RULING: You cannot. Cleting out is final. I cite here the Rule of Mass, as noted here in the original Constitution of Cleting Out, Redleg Nation, May 5 in the Year of Our Lord 2021, Section 3, Paragraph 10:

You must be firm in your Cleting. You’re sending a message here. Do not turn to the Cowboy once you have extinguished Chris Welsh.

Can one Clete out of an entire season?

I just did. It was weird and sad and dispiritng,  but bearable. After a lifetime of honing my Cleting out skills, I applied it to not just the Reds, but all of the MLB. I didn’t see or listen to a single game in its entirety. I assume they’ve learned their lesson.

I hope this helps, Redleg Nation. Any other clarifications you’d like to set before the Unifited East Side/West Side Council on Cleting? Let me know in the comments.